(Note – SBH – I find the information on the brickworks at Aberhill, Denbeath, Methil and Wemyss very confusing with regards names and locations that seem to swap and move! If anyone can clarify the situation for me or point out information that is perhaps listed wrongly against a particular brickworks then please get in touch.)

Below – Many thanks to Ronald Gage for the following undated photograph of brick workers standing outside a kiln at the Aberhill Brickworks. Ronald states the Works opened in 1908, closed in 1952 and were demolished in 1976. 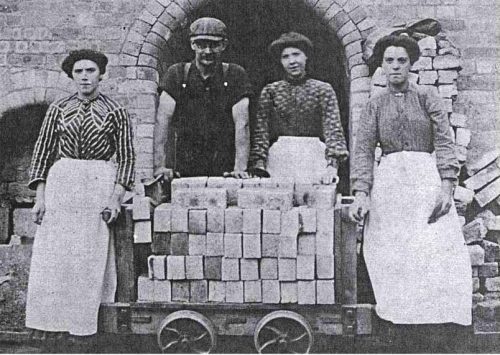 In 1908, the Methil Brick Company bought from Bradley and Craven the following machinery.

Another 9ft diameter Grinding Mill was also bought, but there are no other details about it.

The machine wing lay south of the kilns, and a tramway led from them to the pit east of the works.

(Note: – With regards to the entry below I believe some of the dates are wrong. I don’t think the works closed in 1964 and I also am not convinced about the 1976 date re the buildings being demolished. Likewise, I think the references to Lewis and Donald Rose are the wrong way round. I was sent this information but I have not been able to check it against the referenced newspaper title as it is not reproduced in the BNA to which I currently have access) – If anyone can clarify then please let me know.

Methil Brick Company was a private works located at the top of Kinnarchie Brae, Aberhill, Methil…
A group of promoters meet on 29th January 1908 of which Mr Lewis C Rose was one, and in February 1908 a Registered Company was formed with a Registered office at the junction of the Link Road and Methilhaven Road…
In 1920 the works produced 6,000,000 bricks and the production was raised after World War 2 to 9,000,000 bricks…
The Managing Director’s salary was fixed at £200 per annum, out of which he was expected to provide his clerical assistant with her remuneration.
The Works was closed down in 1964 and the buildings demolished in July 1976, when the area was landscaped and trees and bushes planted on the cleared site……
Blae was brought to the works from the Leven Pit by means of hutches pushed along a narrow-gauge railway line…
Mr Donald Rose was the last Managing Director.
C. Extract from the “Leven Mail” dated 1963.

There is also a suggestion from Tam Moffett that there was a very small run of bricks made with the mark “Aberhill” – they are now on the most wanted list!

24/08/1907 – Fife Free Press – Bailie Rose is said to have fenced the triangular piece of ground to the east of Jordan Terrace, between the highway and the car line, for the erection of brickwork. The huge bing of pit blae will afford the new brickwork material sufficient to last for least twenty years.

22/02/1908 – The Scotsman – New joint-stock companies – The Methil Brick Company, Leven to carry on the business as manufacturers of bricks, tiles etc and traders in minerals generally. Capital £8000 in shares of £1 each. The public is not invited to subscribe for shares.

15/08/1908 – Fifeshire Advertiser – Methil – New work started – this week the brickwork at Aberhill for the Methil Brick Company was started. It is fitted with a Hoffman kiln of 14 chambers, each chamber capable of firing 13000 to 14000 bricks.

(Note:- the works were the brainchild of Mr Donald Rose and he was the first Managing Director) 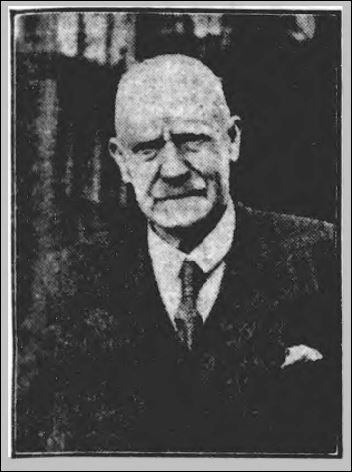 16/01/1909 – Fifeshire advertiser – Terrible death – Leven – About noon on Thursday a youth named Boyle, Durie Street, Methil fell into the crusher at Methil Brickwork. A terrible but sudden death overtook him. Before the machinery was thrown out of gear, he was crushed beyond recognition. Boyle was just 15 years of age and he was employed along with his father and brother in feeding the mill from the redd bank.

23/01/1909 – St Andrews Citizen  – Boy decapitated. A dreadful end. A Methil boy named James Boyle, of Durie Street, employed Methil Brickwork, was decapitated while at work on Thursday last week. He was employed to mind a grinding machine having two iron rollers each 3 1/2 tons weight, which pulps the material used to make bricks. About 11 30 a.m., the lad, while lifting an iron plate, slipped and fell backwards under the grinding machine. He was caught up and whirled round, again and again, the roller each time triturating his body, just as it would have treated bricks and mortar until his head was severed from the body, his right arm was wrenched out, and his collar bone was broken. Horrible to tell, had the machinery not been stopped just in time, the fragments of his body would have been forced through a large sieve, carried up a shoot, and deposited in the brick making machine and mixed up with the bricks. The only witness of the accident was a labourer named Tom Baird, who was some distance away. He made haste to get to the spot, and applying a patent clutch, brought the grinder instantly to stop, but only to avert the dreadful after-consequences referred to. Dr Hunter was called in, merely to certify death. The lad’s father, John Boyle, is employed at the same works; he was overcome with emotion and had to be led away. Ex-Provost Rose and Bailie Farmer, two of the directors, were at once informed, and they ordered the works to be stopped for the day. The body was removed to Durie Street, Methil. Boyle was only 15 years old.

23/09/1909 – Dundee Courier – Methil Brick Co – at a meeting of the shareholders of Methil Brick Co accounts were submitted from the date of registration on 17/02/1908 to 31/09/1909. The net profit after deduction for preliminary expenses and depreciation amounted to £1101 2s 2 1/2d. The directors recommended a dividend of 15% per annum on the ordinary shares which amounted to £201 2s 2 1/2d. Captain Gordon was appointed as director and the chairman, Mr D Rose was re-elected. 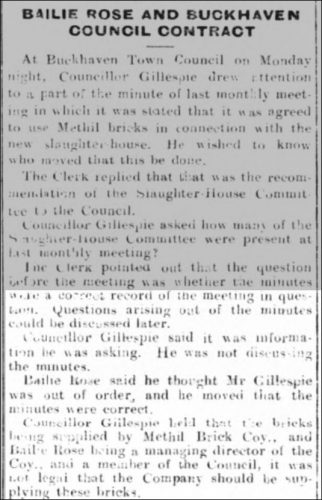 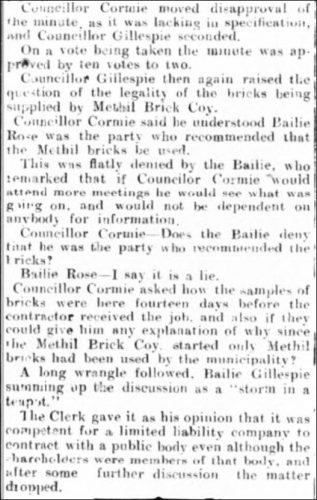 Below – 1913 – Methil Brickworks. (By 1947 the brickworks are not referenced at this location although the buildings are still detailed).

28/02/1922 – Dundee Courier – Major W.K.O Shepherd, DSO, Leven has in succession to his uncle been appointed as secretary to the Methil Brick Company Limited.

Below – 13/10/1923 – Dundee Courier – Prosecution of hiring young persons beyond the legal time period governed by the Factory and Workshop Act 1901. 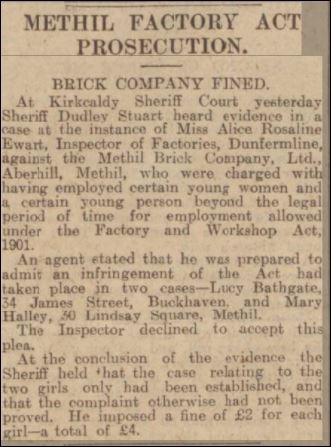 12/05/1925 – Dundee Evening Telegraph –  Thomas Paterson, engine driver, 90a West High Street, Buckhaven, was at Cupar Sheriff Court today fined 40s for having at the railway sidings at Methil brickworks and Leven collieries, maliciously cut and destroyed parts of eight railway covers and stolen them, the property of the L and N-E. Railway Company.

31/10/1925 – Fife Free Press –  Builder Injured. Mr Geo. Kinnear, builder. Lundin Links, was, on Saturday, seriously injured by the caving of part of a Melhil Brickwork kiln. He was covered in the hot debris, which severely burned his head and shoulders. He was removed to Wemyss Hospital. 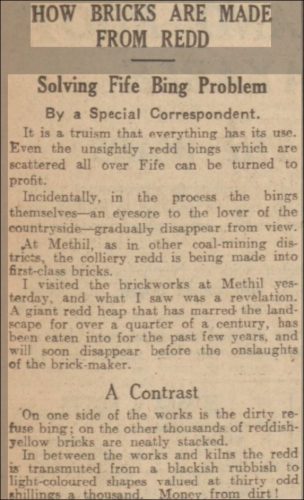 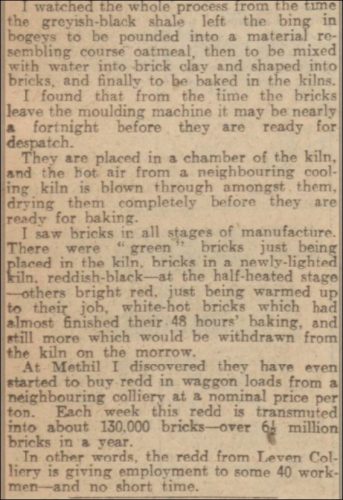 20/02/1933 – Dundee Evening Telegraph – Two cargoes of bricks from Methil Brickworks were also loaded recently (Methil Docks), the SS Constance of Leith taking 130 tons to Fraserburgh and the SS Wheatblade of Cardiff loaded for the North of Scotland …

27/05/1933 – Fife Free Press – Donald Rose was born in 1863 and died in May 1933. Donald Rose founded the Methil Brick Company and was  Managing Director of the Company from its inception.  Mr Rose had been at the head of the company’s affairs since it began in 1908 and has carried out its duties with great credit. Under his capable guidance, the concern has become one of the most important of its kind in Fife. He also acquired the Armadale Brick Company with which is associated a coal mine and fireclay works… His death was greatly regretted by the shareholders, it was unanimously agreed to appoint Louis ( Lewis ?)  C Rose chairman of the Directors.

Local demand for bricks in October 1933 was very good. The company had also been successful in securing contracts outside of Fife, which kept the works going full-time over the year.  Because of this bonuses were paid for man £15 – Clerk £5 – Clerkess £3.

20/01/1934 – Fife Free Press – Accident at Methil Brick Company. John English(16) caught his hand in machinery and had to have it amputated.

19/02/1938 – Fife Free Press – 3 men are caught stealing coal from waggons belonging to the Methil Brick Company while they sat in a siding near Aberhill School.

10/06/1944 – Fife Free Press – A charge of leaving his employment with Methil Brick Coy without permission in writing of a National Service Officer was preferred against James Stevenson, Labourer, 59 Whyterose Terrace, Aberhill. He pleaded guilty and was fined 30s.

Below- 08/08/1945 – Brick shortage. Methil Brick Company have been working half time for 3 years ( resource issues due to men at war). Possibility of Kincaple Brickworks starting up?

21/12/1946 – Fifeshire Advertiser  – Kirkcaldy hauliers are granted permits … a Methil contractor, who was granted for a 2 1/2 ton van to carry agricultural produce and requisites within a radius of 10 miles, building and road material within a radius of 15 miles and bricks from Methil Brickmaking Co within a radius of 20 miles, claimed that bricks made at Methil and intended for Tayport were diverted to Inverness by rail, because road hauliers wouldn’t or couldn’t come in for them … the brickworks at Methil had asked him to carry bricks to Tayport but he had refused … 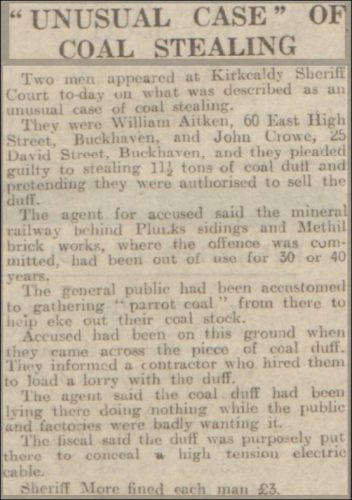 Below – 28/06/1947 – Fifeshire advertiser – The death occurred suddenly at his home on Saturday afternoon of Mr Williamson, foreman at the Methil Brick Company between 1928 and 1947. 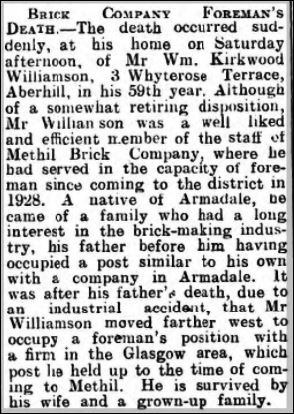 10/07/1948 – Fife Free Press – Unsightly – The unsightliness of a heap of redd for the production of bricks, which is accumulating outside the brickworks at Aberhill. Methil was strongly condemned by Provost William Slater, Methil, at the monthly meeting of Buckhaven and Methil Town Council on Wednesday. “Just when we are trying to tidy the burgh we are faced with another unsightly monument,” he said. “I know we must produce bricks, but surely it is not necessary to have such a hideous heap of stuff.” The matter is to be investigated by the Public Health committee who are also protesting to the National Coal Board because the bing at Wellesley is again burning and discharging fumes.

22/07/1950 – St Andrews Citizen – Brick shortage for the Dunedin Housing Scheme … the Department of Health have been in communication with the Methil Brick Company and are informed that they are endeavouring to supply one load per day to the Alliance Construction Company. An inquiry might be made at the National Coal Board, Cowdenbeath for supplies as the increased cost of the Lochside or Alloa bricks would appear to be related to the haulage costs from these areas …

28/07/1951 – Fife Free Press – Fatal accident enquiry at Methil Brick Company following the death of James Baxter (77) who was struck on the head by a moving belt which was driving a brick making machine.

Below – 10/11/1951 – Fife Free Press – Methil Brick Company seeking to use material from the Pannie bing to make bricks. 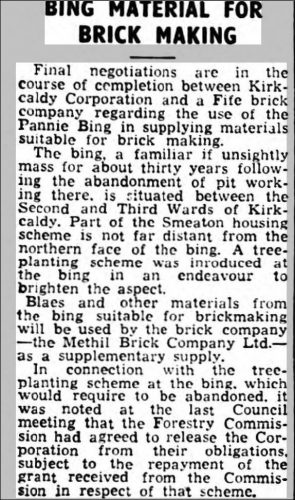 22/03/1952 – St Andrews Citizen – Methil Brick Co Ltd applied for planning permission to use material from the coal bing at Raderne for the manufacture of bricks. Permission was unanimously granted, several members commenting that the removal of the bing would be an improvement on the landscape.

18/07/1953 – Fife Free Press – Leven development plan – makes reference to the need to remove the Wemyss Estate Railway which supplies material to the Methil Brick Company. It was unsightly and it prevented the integration of the expanding built-up areas of Methil and Methilhill.

18/07/1953 – Fifeshire Advertiser – Methil Brick Company object to the proposal to remove the Wemyss  Estate Railway. However, it was said that the railway was only used once per day to carry bing material to the brickworks and as such an alternative method of transport should be easily got.

Below – 18/09/1954– Fife Free Press – Methil Brick Company continue to remove the Pannie bing as they continue to manufacture bricks from the waste. 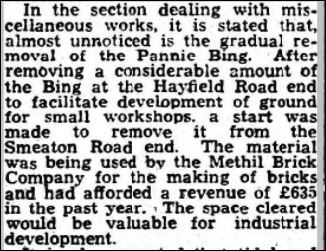 05/11/1955 – Fifeshire Advertiser – 2 girls aged 18 and 19 involved in a fight at a hut owned by the Methil Brick Company Limited. Both were setters. One girl was charged with assault and fined 10s or alternatively 5 days. 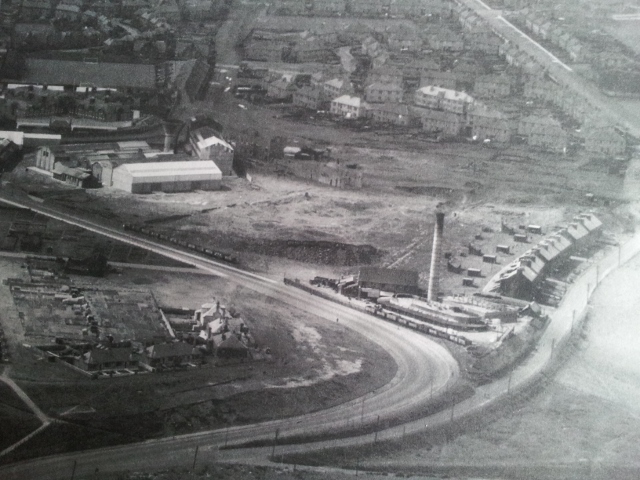