Scottish Brick Company – Following nationalisation of the coal industry in 1947, the National Coal Board (NCB) inherited a number of brickworks. Around 1969,  saw the NCB selling off its brickworks with the Scottish Brick Corporation (SBC) taking over most of them, some 33 sites in Scotland. The SBC then started using its own stamp on the bricks it produced, usually the initials SBC. There are various designs of stamp that differ in letter, frog and marks and it is very possible that each site marked their bricks slightly differently in this way.

Scottish Brick Company. Head office in Glasgow and at one time fifteen works in central Scotland producing pressed common bricks. Took over the National Coal Board’s Scottish brickmaking interests in the 1960s (Douglas). The new Centurion plant at Bishopbriggs, producing 72 million facing bricks a year, was opened in 1976. Facing bricks were rarely made in Scotland, the traditional material being stone of roughcast (harling). Carbonaceous shale is mined near the works, crushed, ground, and extruded. The bricks are cut by wires, twenty at a time. There are three kilns each with 28 chambers of 25,000 bricks capacity. (They are of Dutch design, know as Vlammoven, similar to a transverse arch, Staffordshire kiln.) In a normal cycle, 4 chambers are drying, 6 preheating, 5 firing at over 800° C, 5 cooling, one has the top of the wicket open, one has the wicket fully open, and 6 chambers drawing and setting. (Brick and Clay R e c o r d, December 1976).

The following are the SBC brickmarks that I am currently aware of. Please click this link to view them as per the individual posts on my website.

Feb 1969 – NCB and Thomas Tilling group announce a merger of their brickmaking interests in Scotland and the formation of the Scottish Brick Company Ltd with Mr R. W. Parker as chairman. 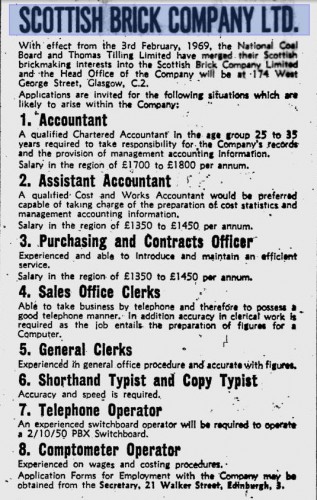 Below – 09/01/1973– The Glasgow Herald – Scottish Brick Company advert – We don’t think that contractors deserve the breaks they get. 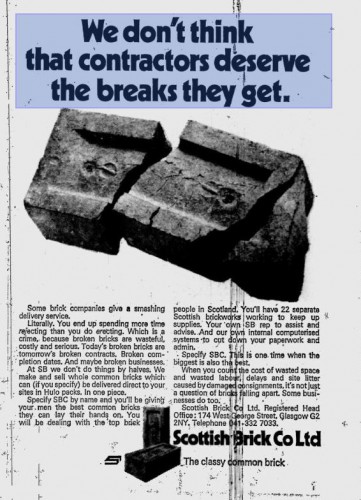 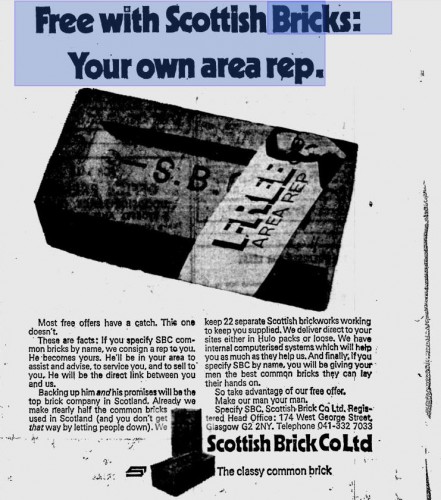 Below – 26/04/1973 – The Glasgow Herald – Scottish Brick Company advert – These letters tell everybody what a fine person you are. The classy common brick. 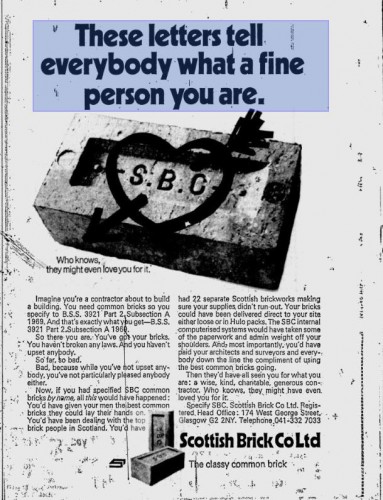 Below – 17/12/1973 – The Glasgow Herald – SBC order 3 x Vlamoven kilns to be built by Gibbons Brothers of Gibbons Dudley Group. 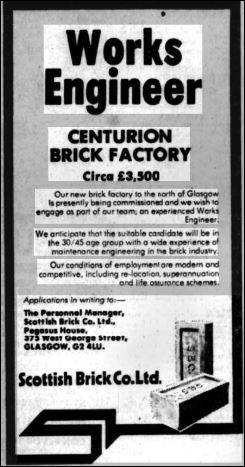 Centurion was the name selected by the employees of Scottish Brick Co.  Ltd. for the new plant in Bishopbriggs Scotland.  Its location near the Antonine Wall, a major Roman civil
engineering project, was the inspiration for this modern face brick plant. Face brick are just beginning to be an accepted building surface in this Central area of Scotland.  In the past, brick have been covered with stucco, particularly for home building.  The new plant represents a dramatic step forward by Scottish Brick Co. Ltd. to establish this new market.

Mine high carbon shale –  High carbon shale is mined near the plant and is stockpiled until needed.  A front end loader moves the shale to three hoppers feeding a double roll crusher.  Crushed material moves into the feed hopper, then is taken automatically as needed to a system of three grinding mills.  Ground shale is conveyed to double shaft pug mill mixer where some moisture is added.  One man operates this entire raw material preparation department.
The mix spends at least 20 minutes in a souring tower before feeding out the bottom and moving to the two extrusion lines.  Slugs of extruded clay are side cut, 20 at a time, and off-beared into docks on alternate sides for lift truck pick up.  Packages of 500 brick are assembled here and taken directly to the kiln. Three chamber kilns, each with 28 compartments, are used to fire the brick.  Each compartment holds about 25,000 brick.  In a normal cycle, four compartments are drying; six are pre-heat; five are burning more than 800 C.; five are cooling; one has the door top removed, and one has the door open.  The other six are working compartments.  Burners are on top, firing down the side of the setting.  Every 12 hours they are moved forward one complete compartment.
Brick are unloaded by lift truck and banded into a 500 brick package without a pallet.
The Centurion plant is continuing to improve manufacturing technique.  Additional clays for body composition are being tested and various surface texturing will be added.  As customer acceptance increases and Scottish Brick Co. is convinced that it will, Centurion will be able to meet that demand.

December 1976 – Brick and Clay Record –  Scottish Brick Corporation. Head office in Glasgow and at one time fifteen works in central Scotland producing pressed common bricks. They took over the National Coal Board’s Scottish brickmaking interests in the 1960s (Douglas). The new Centurion plant at Bishopbriggs, producing 72 million facing bricks a year, was opened in 1976. Facing bricks were rarely made in Scotland, the traditional material being stone or roughcast (harling). Carbonaceous shale is mined near the works, crushed, ground, and extruded. The bricks are cut by wires, twenty at a time. There are three kilns each with 28 chambers of 25,000 bricks capacity. (They are of a Dutch design, known as Vlammoven, similar to a transverse-arch Staffordshire kiln.) In a normal cycle, 4 chambers are drying, 6 preheating, 5 firing at over 800 0 C, 5 cooling, one has the top of the wicket open, one has the wicket fully open, and 6 chambers drawing and setting.

Below – 21/05/1994 – Newcastle Evening Chronicle – Centurion Scottish Brick, Centurion Works, Old Edinburgh Road, Tannochside, Uddingston G71 7LN – are pleased to be associated with ‘Brick Services’ and wish them every success in the future. (Note – SBH – Brick Services were a company operating out of Patterson Street, Blaydon, Tyne and Wear). 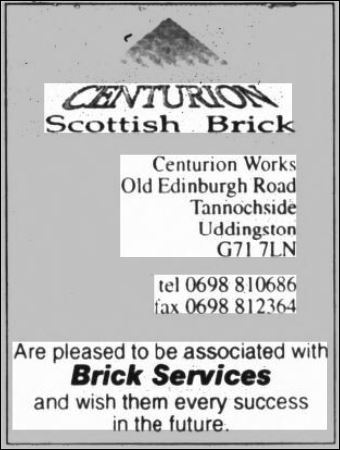 2018 – Centurion Brick (Tannochside) Limited is a dormant company incorporated on 8 July 1988 with the registered office located in Livingston, West Lothian. Centurion Brick (Tannochside) Limited has been running for 30 years 6 months. There are currently 2 active directors and 1 active secretary according to the latest confirmation statement submitted on 24th January 2018.

Below are some of the codes as per the Scottish brick Survey published in 1985. 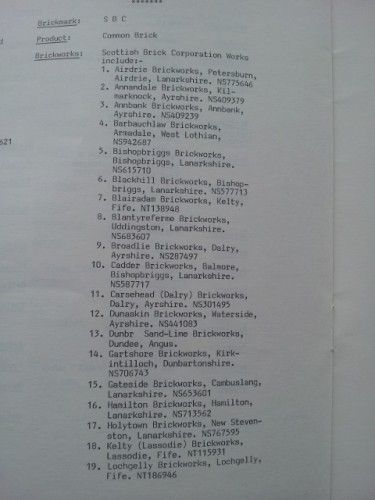 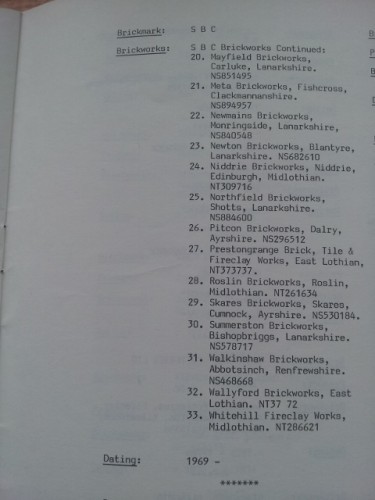 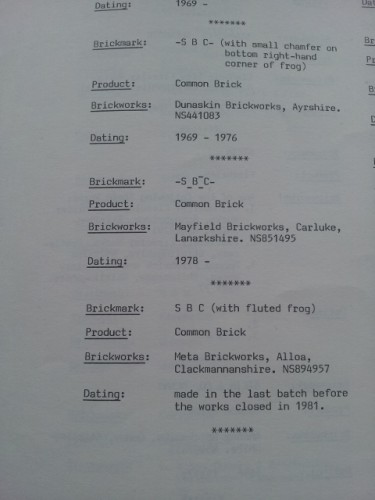 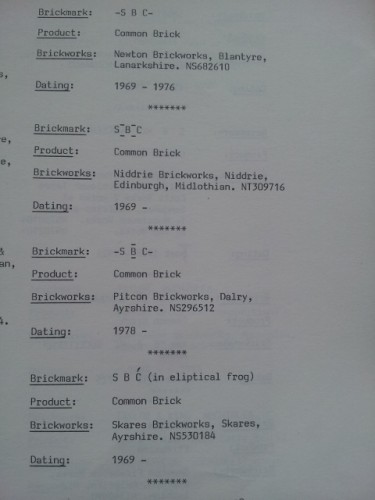