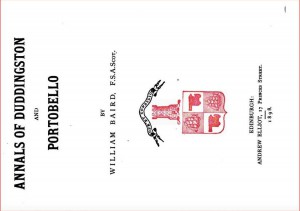 Below – 21/09/1812 – Caledonian Mercury – Fire brick and Clay Joppa. To consumers of fire brick and fire clay – The public are informed, they can now be supplied with these articles from the brickwork at Joppa, three miles from Edinburgh, on the London road.  The brick has already been submitted to the severest tests. It has stood the cupola heat in the foundries, along with English brick, and no difference whatsoever could be perceived. It has been tried too in a variety of other manufactories with equal success.

The fire clay is admitted, by those who have used it, to be superior to that hitherto imported from England, being free from impurity, and far better ground.  The price for both articles is considerably lower prime cost and when the expense of importation is added, the proprietor can assure customers of a very great saving. On trial, they will find these commodities answer completely the description here given of them.  The brick can be furnished of all sizes and shapes. Orders addressed to James Alves, clerk to the brickwork, Joppa, by Edinburgh; T. M. Parker, colour-works, Leith; or to William Hamilton, W. S. Tiviot Row, Edinburgh, will be carefully attended to. 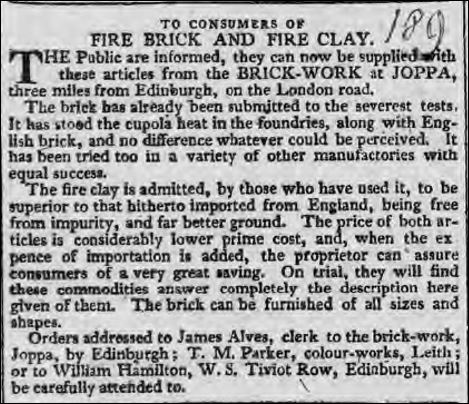 26/04/1813 – Caledonian Mercury – Fire brick manufactory to be let – Scots Fire Brick equal to English. To be Let, for such period as shall be agreed on, and entered to immediately, or at Whitsunday. The Fire Brick Work at Joppa, three miles from Edinburgh, on the London Road. This work consists of a square 110 feet each side, roofed in round and round, so that the manufacture can be carried on both as to men and horses, undercover, and independent of the weather, at all seasons; there is sufficient cover too, both for prepared and raw materials. Within the square also is comprehended an office; a moulder and carter’s house; a stable for four horses; two horse mills, and a pump well (inside the moulding-house), affording an uninterrupted supply of water.  The sea washes the north wall of the work, and the beach here, being the finest possible, vessels can in moderate weather load close to the work: on the south, within a few yards, is the London Road. The main seam of fire-clay is 14 feet thick, laying nearly perpendicular to the surface of the ground. It runs in a direct line from the high way to the sea, and almost on contact with the manufactory. Parallel to, and within two feet of which, is another seam, six feet thick, besides several others in the property, yet untouched;-so that the supply may be considered inexhaustible.  The tacksman of the stone quarry will, if desired, undertake to lay the fire-clay on bank upon reasonable terms. The manufactory is at present capable of turning out 18,000 bricks per week, and the present demand exceeds the supply.  The northern ports being now open, an increased demand may be looked for.  The bricks have undergone repeated trials in all the manufactories that make use of that article, and are fully ascertained to be equal to the English brick. The ground fire-clay is admitted to be superior. Mr James Alves, manager, Alexander Ross, or Andrew Scott, at the work, will show the premises. Offers, in writing, will be received until the 15th day of May next, by William Hamilton, W. S. 5, Tiviot Row, Edinburgh, who will conclude a bargain.

Below – 14/07/1869 – Edinburgh Evening Courant. (Note – SBH – I am uncertain if this advert relates to the Joppa Brickworks but I have included it here to ensure it is recorded.) 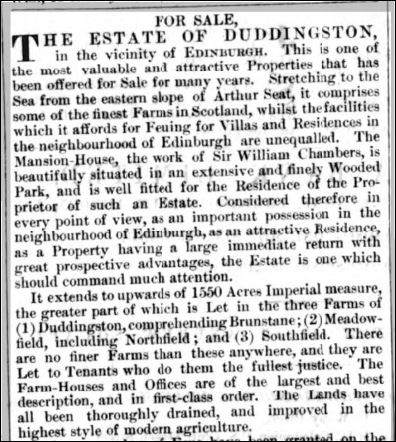 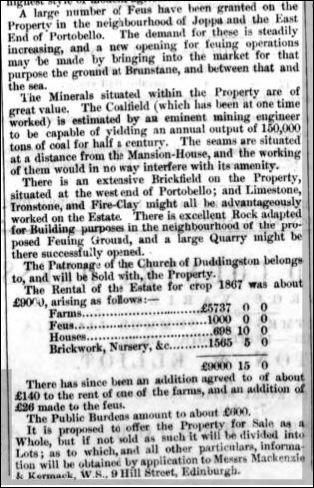 02/08/1895 – Midlothian Journal – Annals of Duddingston and Portobello by William Baird – Besides colliers and salters, there were in former times in the Parish of Duddingston other industries dependent upon the natural products of the earth, without the notice of which our narrative would not be complete. We refer particularly to the freestone quarries of Joppa, and the fire-clay brickwork.

Perhaps the earliest quarrying for stone required for the houses at Joppa was made at either side of the ”Pans ” where the stratum of freestone cropped out and was exposed to view. Little labour was required to detach the blocks from the cliff, which must then have presented a bold front to the sea. On the west side of the “Pans”, where not covered up by the sloping bulwark, may still be seen a portion of the freestone bed. It has long ceased to be wrought. A few hundred yards further west and opposite the houses of Joppa, on the property of Major Adair (a somewhat eccentric character in his day), a second quarry was opened towards the latter part of last century; and a third, and by far the largest and most important was started on the south side of the village and close to Easter Duddingston, on the ground of the Marquis of Abercorn. The quality of the sandstone beds there laid open was very varied, some layers being fine-grained and compact, others friable and composed of large loosely cemented quartzose particles, while small strata of limestone and ironstone frequently occurred, intermixed with several coal seams. A large portion of the town of Portobello in the early years of its history was built from this latter quarry. The stone is not considered good for house building, there being too much inequality in the grain, and the presence of iron ore too frequently discolouring the buildings erected by it.

In both quarries, however, there existed fine seams of fire-clay from six to fourteen feet thick. Close to the second or seaside quarry there was established in the latter part of last century a large fire-clay work chiefly for the making of bricks, which was carried on with success till about fifty years ago, first by Mr John Smith, Baron Bailie of Duddingston, and latterly by Mr Allan Livingston.

The brickwork, which was capable of turning out about 18,000 bricks per week stood close to the sea beach in what was latterly called Joppa Park; but the whole area is now entirely covered with dwellings. Here there was a considerable range of offices, sheds, kilns, and workmen’s houses, which were protected on the seaward side by a high stone wall which stood a few feet outside the present Promenade. About fifty years ago the works being disused fell into ruins, and ultimately the sea wall was swept away by the sea. Occasionally, however, its foundations may yet be seen after some high tide has lowered the level of the sand.

The Joppa Quarry, to the south of Joppa Station, was opened about the year 1780 by Mr Alexander Robertson. He was succeeded by his son of the same name, who long resided in Joppa, and who by his industry acquired a large fortune, principally in the com trade. Mr Bobertson continued to excavate both stone and fire-clay till about the year 1817 when he became involved in a dispute with the Marquis of Abercorn, which was carried into Court, and decided in his favour. On the expiry of his lease, however, the quarry was taken from him and let to Mr Livingston.

Mr Livingston having exhausted the clay in his lower Joppa Quarry some years previous, found the large quarry a great acquisition, as he could now carry on the brick making without being dependent on others for his clay. The quarry and brickwork were carried on by him till 1845 when he became the tenant of the Abercorn Brick Works in Portobello. Being thereafter abandoned, the Joppa Brick Work fell into ruins, and as we have indicated, has left no visible trace behind.

The (larger or Easter Duddingston) quarry continued to be used by Mr Livingston till his death in 1858, and by his son, Mr Allan Livingston, some years thereafter; but for more than a quarter of a century it has ceased to be wrought. The fire-clay was dug out by running long parallel galleries underground following the stratum, and here, as in the adjoining coal pits, the drudgery work of carrying the fire-clay was often done by women, who toiled along the low-roofed galleries to the open level with their boxes on their backs called ”hutches,” fastened with a leather strap across their foreheads like a fishwife’s creel; each load weighing nearly a hundredweight. Toilsome, unhealthy work it must have been, degrading to the last degree as employment for women. But we have people living amongst us still who remember seeing them engaged at it.

During the latter years of his life, when residing in Portobello. Hugh Miller found the quarry of Joppa a favourite hunting ground. Here in its inner recesses, he discovered many interesting geological specimens, which furnished him with illustrations and confirmations of those wonderful theories of his which so charmed and instructed the scientific world of thirty or forty years ago.

In his explorations at Joppa, and at the Abercorn Clayfield, Miller acknowledges having repeatedly received from Mr Livingston valuable aid in prosecuting his researches. On one occasion when giving a lecture on the clay beds, before a large audience in Edinburgh, his voice failed him, and being unable to make himself heard, he concluded with the remark, ” Well, gentlemen, you have not lost much, if you go to Mr Livingston, he will tell you far more than I can.” …