(Note – SBH – Of all the Scottish bricks I ‘see’ being found on foreign shores, the Gartcraig brickmark is by far the most prevalent and widespread).

Below – 1858  – Gartcraig Farm is situated to the bottom left. From the information detailed on this page, it appears that Andrew Yeats was manufacturing bricks from 1862 which is just after the map below was surveyed. It is likely that Andrew Yeats’s early works were on the same site as the works detailed on the map dated 1897.  There is a round-shaped building on the 1858 map but this is likely to be a gingang or a mill gang, basically a farm structure. 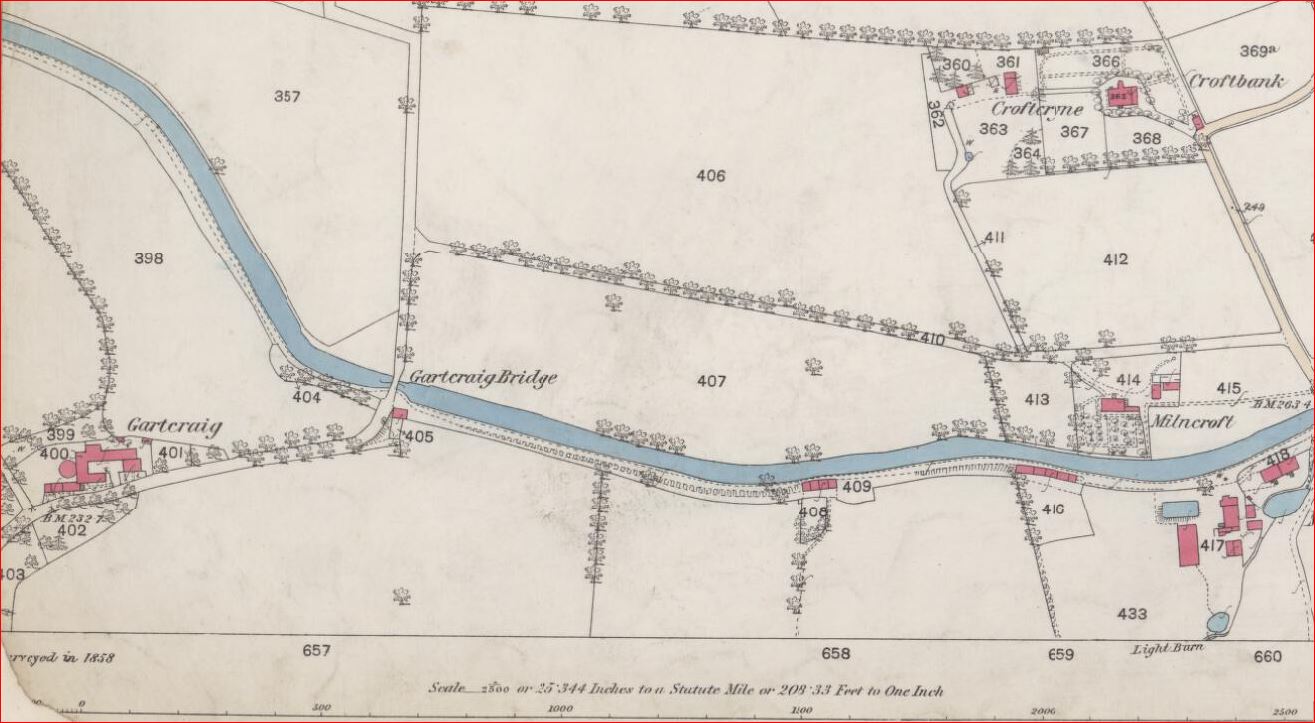 1862 – Company started under the name Andrew Yeats and Company. His partner was Dr Willis. (Note – SBH – It is unclear if they were making firebricks at this time).

Below – 11/09/1872 – The Scotsman – Formation of the Gartcraig Coal and Fireclay Company Limited. 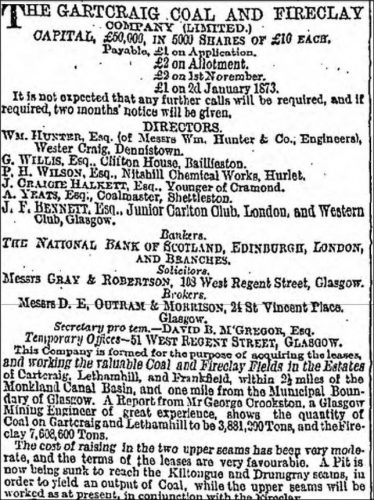 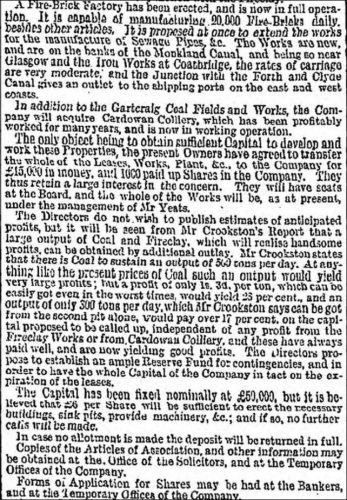 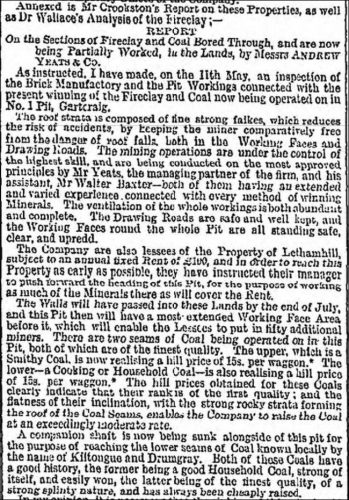 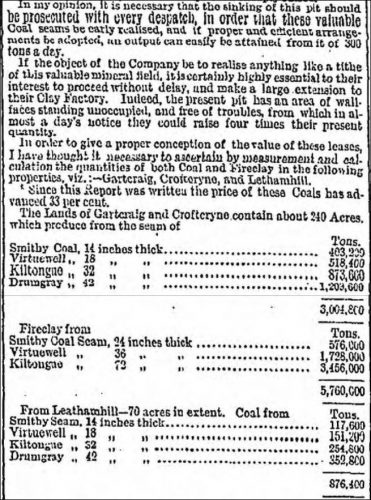 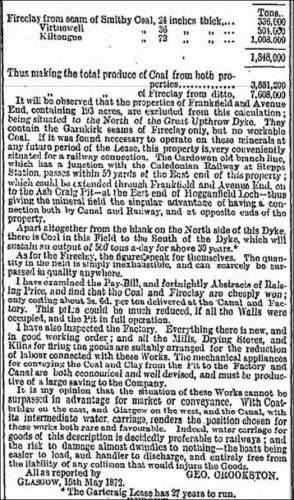 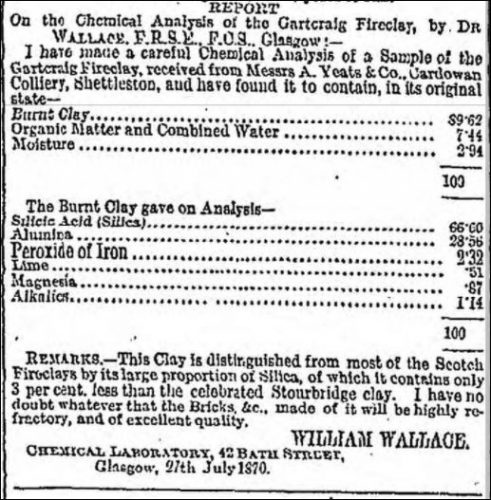 It is not expected that any further calls will be required, and if required, two months notice will be given.

This Company is formed for the purpose of acquiring the leases, and working to the valuable Coal and Fireclay Fields in the Estates of Gartcraig, Lethamhill, and Frankfield, within 21/2 miles of the Monkland Canal Basin, and one mile from the Municipal Boundary of Glasgow.  A report from Mr George Crookston, a Glasgow Mining Engineer of great experience, shows the quality of Coal on Garteraig and Lethamhill to be 3,831,200 Tons and the Fireclay 7,608,600 Tons.  The cost of raising in the two upper seams has been very moderate and the terms of the leases are very favourable.  A Pit is now being sunk to reach the Kiltongue and Drumgray seams, in order to yield an output of Coal, while the upper seams will be worked as at present, in conjunction with the Fireclay.  A Fire-Brick Factory has been erected and is now in full operation.  It is capable of manufacturing 20,000 Fire-Bricks daily, besides other articles.  It is proposed at once to extend the works for the manufacture of Sewage Pipes &c.  The Works are new, and are on the banks of the Monkland Canal and being so near to Glasgow and the Iron Works at Coatbridge, the rates of carriage are very moderate, and the Junction with the Forth and Clyde Canal gives an outlet to the shipping ports on the east and west coasts.  In addition to the Gartcraig Coal Fields and Works, the Company will acquire Cardowan Colliery, which has been profitably worked for many years and is now in working operation.  The only object being to obtain sufficient capital to develop and work these Properties, the present Leases have agreed to transfer the whole of the Leases, Works, Plant, &c, to the Company for £15,000 in money, and 1000 paid-up Shares in the Company.  They thus retain a large interest in the concern.  They will have seats at the Board, and the whole of the Works will be, as at present, under the management of Mr Yeats.

The Directors do not wish to publish estimates of anticipated profits, but it will be seen from Mr Crookston’s report that a large output of Coal and Fireclay, which will realise handsome profits, can be obtained by additional outlay.  Mr Crookston states that there is Coal to sustain an output of 500 tons per day.  At anything like the present prices of Coal such an output would yield very large profits, but a profit of only 1s 3d. per ton, which can be easily got even in the worst times, would yield 28 per cent., and an output of only 300 tons per day, which Mr Crookston says can be got from the second pit alone, would pay over 17 per cent, on the capital proposed to be called up, independent of any profit from the fireclay Works or from Cardowan Colliery, and these have always paid well, and are now yielding good profits.  The Directors propose to establish and ample Reserve Fund for the contingencies and in order to have the whole Capital of the Company intact on the expiration of the leases.  The Capital has been fixed nominally at £50,000, but it is believed that £6 per Share will be sufficient to erect the necessary buildings, sink pits, provide machinery, &c; and if so, no further calls will be made.  In case no allotment is made the deposits will be returned in full.  Copies of the Articles of the Association and other information may be obtained at the Office of the Solicitors and at the Temporary Offices of the Company.  Detailed prospectuses containing Report by Mr Crookston, Engineer, and an analysis of the Fireclay by Dr Wallace, and Forms of Application for Shares may be had at the Bankers, the Brokers, and at the Temporary Offices of the Company.

04/02/1873 – The Scotsman – The first meeting of the shareholders in tho Gartcraig Coal and Fire-Clay Company (Limited) was held today in the offices of Mr McGregor, accountant, 51 West Regent Street Glasgow, Mr Wm. Hunter (The chairman) stated that all the shares had been taken up except 741, which would be offered to the present shareholders in case the money should be required. He explained the progress of the works and stated that good dividends are looked for soon as the pits are in full operation.

Below – 14/07/1875 – Glasgow Herald – Wrongful dismissal of Joseph McFadyen (formerly of Andrew Yeats and Co) of the  Garnkirk Fire Clay Company. 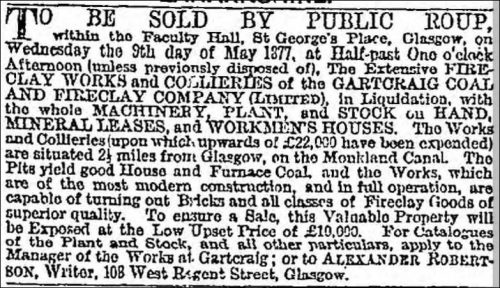 21/01/1878 – Glasgow Herald – It seems the Gartcraig Coal and Fireclay Company Limited was still up for sale at this time but at a reduced upset of £7500.

Below – 05/10/1880 – Glasgow Herald – Bankruptcy hearing of Mr Andrew Yeats. The Company was started in 1862 under the designation of Andrew Yeats & Company. His partner was Dr Willis. 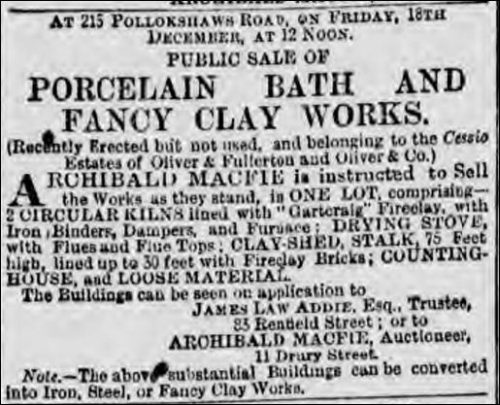 1886 – Gartcraig Fire-Clay Co. 275 Parliamentary Rd; works, Gartcraig, by Shettleston. Depot, Monkland Canal wharf, Castle st.
25/12/1886 – Dundee Advertiser – Fire broke out yesterday afternoon at the works of the Gartcraig Fireclay Company, Shettleston, Glasgow. Two of the drying stoves were destroyed. The damage is estimated at about £1000 and will be covered by insurance.
Below – 01/01/1887 – Dunfermline Saturday Press. Glasgow tramps Christmas quarters. Raid on the Gartcraig Fireclay Works. 21 arrested. 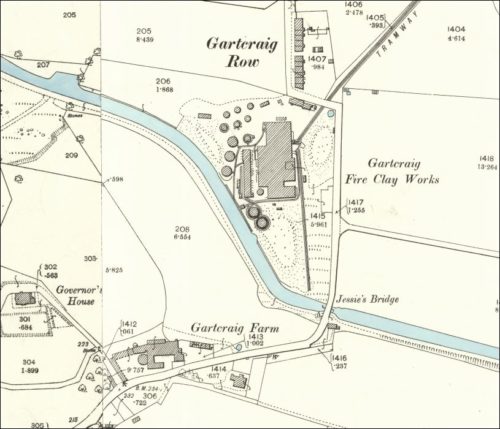 Below – 06/08/1919 – The Scotsman – Sale at Gartcraig Colliery, Millerston on the instruction of the Gartcraig Fire Clay Co Ltd.

Gartcraig statement. To all whom it may concern:   Be it known that we, Gartcraig Fire Clay Company, Limited, a limited liability company organised under the laws of Great Britain and Ireland, and located and doing business at 18 Charles Street, St Rollox, Glasgow, Scotland, have adopted and used the trade-mark shown in the accompanying drawing, for fire clay goods – namely brick, tile and drain pipes in Class No. 12, construction materials.  The trademark has been continually used in the business of the applicant since the 13th of September, 1874.  The trade-mark is “affixed” to the goods by impressing the mark upon the goods themselves.  The trade-mark consists of the word “Gartcraig”.  Said trade-mark has been registered in England, No. 210,067, December 11, 1897.  Chauncey P. Carter, of 4907 Potomac Avenue, Northwest, Washington, D. C., is the person designated as applicants representative on whom process or notice of proceedings affecting the right to ownership of said trade-mark brought under the laws of the United States may be served. Gartcraig fire-clay Company, Limited, P. Wylie Rodger.Secretary. 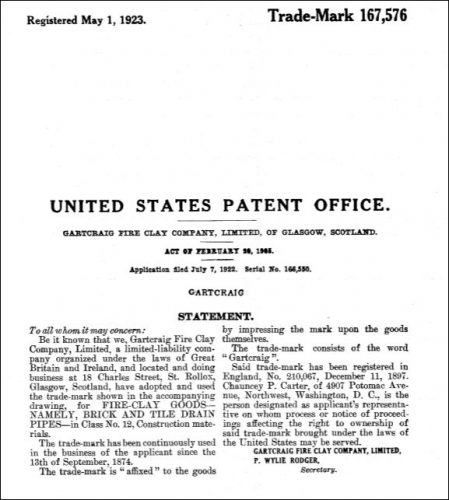 Gartcraig Coal & Fireclay Co Ltd (later Gartcraig Fireclay Co Ltd) – The Gartcraig Coal & Fireclay Company Ltd was incorporated in 1872 to work the fireclays in Gartcraig, Croftcroighn, Frankfield, Avenue End, Lethamhill, Cardowan and Gartsheugh mineral leases, all to the East end of Glasgow. The capital was fixed at £50, 000 in £10 shares, a very large sum for those days, particularly as virtually all the subscriptions came from the Willis and Yeats families. George Willis, Physician of Clifton House, Baillieston, became the chairman and held 1617 of the 4253 shares taken up. Most of the balance was held by the Yeats family. The shares were paid up to the extent of £6 and the capital was scaled down to £34, 000. George Willis and Andrew Yeats were both Coalmasters in the Gartcraig and Cardowan Companies and partners in Andrew Yeats & Co Ltd.

The Gartcraig Coal & Fireclay Company was voluntarily wound up in 1877 but reformed as Gartcraig Fireclay Co. Ltd., and continued to make firebricks up to 1921 when the Works was closed. The brand Gartcraig was taken over by P & M Hurll Ltd. The Gartcraig works site lay on the North Bank of the Monkland Canal, half a mile South of Hogganfield Loch, and was connected with a tramway to the Gartcraig Colliery which supplied the fireclay. The OS map of 1898 shows 6 large round kilns, 6 smaller round kilns and a battery of chambers, so it was a substantial producer of firebricks. The Gartcraig Fireclay Company appears as a small shareholder in James Dougall of Bonnybridge in 1927 and thereafter fades from history.

The workmen reside mostly in rented houses at Shettleston or at Hogganfield, and in 12 houses situated on Gartcraig Estate. Three of these have two rooms and a kitchen, seven have one room and kitchen, and two are single apartments.

The 12 houses are described as follows:-
Erected about 40 years ago – One storey, built of brick – no damp-proof course – Wood or tile floors, wood floors ventilated – internal surface of walls and ceilings in good condition

… The furnace is of the reverberatory type, built of Gartcraig fire-brick and black New Zealand fire-clay. The whole hearth is cased in J-in. iron plate tank, in case of the collapse of the fire-bricks, when the whole charge may be caught. There are three charging doors on one side, and one skimming door at the end of the furnace, and above the latter is a horizontal flue, connected with the underground refinery flue and stack. It is fitted with a hand-hole for cleaning …  source