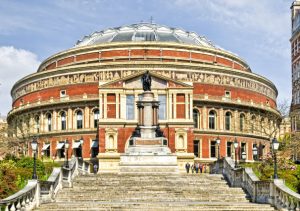 In 1851, the Great Exhibition (for which the Crystal Palace was built) was held in Hyde Park, London. The exhibition was a great success and led Prince Albert, the Prince Consort, to propose the creation of a permanent series of facilities for the enlightenment of the public in the area, which came to be known as Albertopolis. The Exhibition’s Royal Commission bought Gore House and its grounds (on which the Hall now stands) on the advice of the Prince. Progress on the scheme was slow and in 1861 Prince Albert died, without having seen his ideas come to fruition. However, a memorial was proposed for Hyde Park, with a Great Hall opposite.

The proposal was approved and the site was purchased with some of the profits from the Exhibition. Once the remaining funds had been raised, in April 1867 Queen Victoria signed the Royal Charter of the Corporation of the Hall of Arts and Sciences which was to operate the Hall and on 20 May, laid the foundation stone.

The official opening ceremony of the Hall was on 29 March 1871.

The Hall’s distinctive exterior is built from over 6 million red bricks and 80,000 blocks of terracotta and includes a continuous 800-foot long terracotta frieze.

The Industries of Scotland by David Bremner states  ” Messrs Alexander Wilson & Son, fire clay manufacturers, Dunfermline have made a great part of the terracotta required at South Kensington (Royal Albert Hall) and are now engaged with the columns, capitals, cornices, friezes, and other ornamental parts. They have been providing all the ashlar work required. The clay used is of a very fine quality”.

HOWEVER – another source states “Gibbs and Canning, a sanitary-pipe factory in Tamworth, Staffordshire, supplied all the terracotta for the Hall, and defended the use of the material. Mr Canning described the terracotta used for the Hall as comprising ‘pure fire-clay’ and a ‘little grog’