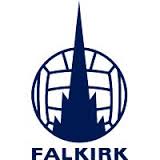 Raewell Firebrick Works, Meadow Bank, Polmont  – The brickworks was started in 1947 by John Rae, who had worked for J & A Towers of Falkirk. The works were then managed by his son, Alan Rae, who made baby bricks, firebricks and general-purpose blaes bricks amounting to about 50 tons a week. One of the very few refractory brick companies to survive the crash in the 1970s. Source Kenneth Sanderson

Below – Source – Falkirk Museum and Archives.

Company history: – The site was originally Meadowbank Pit, owned by Westquarter Estate. However, in 1947 the site was bought by John Rae, and bricks began to be manufactured.

Raw materials: – The raw materials required were dug out by tractor on sites at Avonbridge and occasionally at Calder, The Meadowbank coal pit on-site provided blae.

Processes: – On arrival at the works the clay was emptied into a chute leading to a Whittaker Fan Mill. The clay then dropped down through the perforated bottom into buckets. From here it was carried by bucket conveyor into a storage hopper, a Mitchell rotor store which held about twenty ton of clay. The store slowly rotated so that the clay fell in even layers, from where it moved via a conveyor to the mixer, a Spanish Verdes de-airing extruder. The Verdes had a diameter of 13 inches and was driven by an electric motor. From the mixer, the material entered a vacuum where all the air was removed in order to give the bricks “body”. The material then dropped into another where metal sheets pushed the clay out into long rectangular slab. The mouth-piece of this machine could be altered according to the shape of the brick required. The unfired bricks were then stacked on cars in a pattern that allowed heat to pass through them whilst they were drying. The cars then spent 4-5 days passing through a dryer which was 110 feet long and at a temperature of 85-95 C. The bricks were then transported to the intermittent circular downdraught kiln by forklift truck. The heat was drawn up and over the stacks of bricks, down through a flue in the bottom of the kiln, and finally out through a chimney. The bricks are handset, being stacked with spaces in between them to allow heat and air to pass freely. The kiln was oil-fired, with two burners at each end, and the air draught was controlled by a damper. After firing for 76 hours at a temperature of 1120 C, the kiln was allowed to cool for 5-6 days and then emptied. Some hand brick making also occurred.

Markets: – Bricks from these works were sent all over Scotland, Northern England and Northern Ireland. The market for firebricks was exceptionally good in 1979 as houses were once again being built with open fireplaces. In addition, the District Council provided a significant market, especially in their demand for bricks for manholes.

Products and trade names – Baby firebricks – For domestic fires, Scone firebricks, Square firebricks, Grange firebricks, Range firebricks, Also made hand made bricks, e.g. contractor bricks (“Coal Savers”). These were made in wooden or metal moulds.  Also “tiles” – i.e. a firebrick which was used as a base for the dog grates of big fires. (The works did not make tiles or pipes).

Below – 1946 – The Meadowbank Brickworks were built on the site of the disused Meadowbank Colliery. 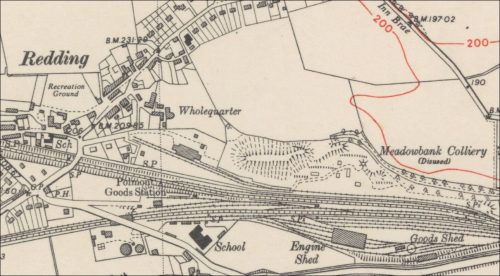 07/06/1950 – Falkirk Herald –  Theft of coal – William Bell, process worker, 13 Kirkwood Avenue, Redding, was fined £1, with the alternative of ten days imprisonment, at Falkirk Justice of the Peace Court on Tuesday. He pleaded guilty to having, on 28th April, stolen 64 lbs. of coal from the Meadowbank Brickworks, Redding. The value of the coal was 2s 9d, and it had been recovered.

1975 – Allan Rae took over the brickworks. From this time and an unknown period prior to these, none of the fire bricks produced were stamped. So ‘Raewell’ stamped bricks are definitely earlier than 1975.

Many thanks to Allan Rae for the following information. Raewell was a name derived from  John Rae’s surname and a co-partner A. C Welsh. The works closed in 2004.

Raewell had a Belgium customer in the 1970s that bought smooth-faced fire brick specials measuring approx. 6″ x 2″ x 1 1/2″. This customer manufactures fireplaces and used the bricks to build those structures.

Tagged with: J and A Towers, John Rae, Meadowbank, Raewell