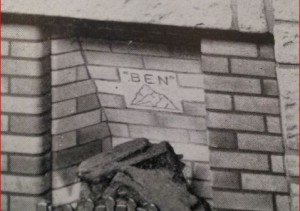 Pre ‘Towers’ – 26/12/1839  – Perthshire Advertiser – The extensive works at Grahamston, Falkirk, well known to local farmers, can immediately supply and quantity of very superior drain tiles and bricks. Being situated within 100 yards of the Forth and Clyde Canal and 1  1/2 miles from the Port of Grangemouth, conveyance to the coast of Fife, Montrose, Dundee, the Tay, Aberdeen, Berwick etc may at all times be obtained by vessels returning from Glasgow, Bainsfors and Grangemouth. An application may be made at the Works or to Robert Mailler, Corn Merchant, Kirkgate, Perth. Adam Watt & Co, Proprietors, Grahamston, Falkirk 04/12/1839.

J & A Towers Limited  – This company is unique in the Scottish Fireclay Industry as it remained in the control of the Towers Family though 4 generations spanning 114 years. The business was founded by James Towers in 1857 on a 2-acre site close to where the Battle of Falkirk was fought in 1298. James was a master joiner and apprenticed his son, Alexander, as a pattern maker to the Old Camelon Foundry, so that when he joined his father in the business in 1876, he was well skilled at making moulds for the hand brickmakers. All bricks were handmade at that time and were burnt in beehive kilns. More efficient down – draught kilns were built in 1895 and a very high 230 feet chimney was erected to provide the draft.

James Towers the founder died in 1890, and shortly afterwards in 1894 his son, Alexander, joined with his friend Robert Howie to take the controlling interest in Campbell & Co (Roughcastle) Ltd, High Bonnybridge, where the brickworks was rebuilt and expanded. Despite his busy life, Alexander found time to become one of the largest breeders of Pouter pigeons and sold several to fanciers in Australia, Europe and America. He was a talented painter of flowers. When Alexander died in 1908, his son James inherited the business and managed it for the next 62 years until his death in 1970. James Towers was a partner in the seed and grain business of Towers & Rule from 1927 – 1932. He was also a partner in the prosperous Berryhill Coal Company at Greengairs, near Cumbernauld, where fireclay was mined along with coal and taken to the Grahamston Works. Originally the works used fireclay from open cast pits to the South of the Works but this fireclay was relatively low in refractoriness and was replaced by fireclays from Roughcastle and Greengairs. A very wide range of firebrick shapes were made for cooking and heating stoves and sold by the Falkirk Ironfounders. In the post-war period, the Company specialised in making house fireplaces which were sold under the Ben trademark.

James took his daughters into partnership in the 1950s. Winnie the elder looked after administration and sales while Helen, a graduate of the Royal Technical College ( now Strathclyde University) supervised technical developments and production in the works. About 80 – 90 were employed, mostly women. Legislation making smokeless zones and the introduction of natural gas for home heating reduced the demand for fireplaces so that after the early death of Dr Helen in 1967, and of James in 1970, the business closed in 1971. – Source Kenneth W Sanderson. 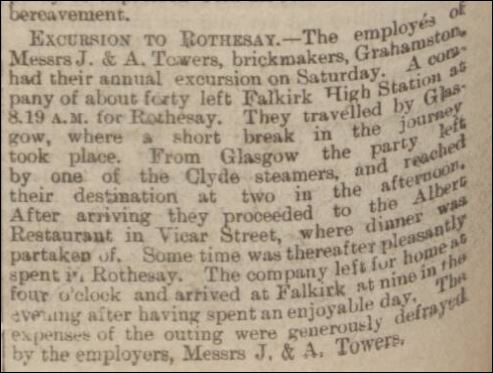 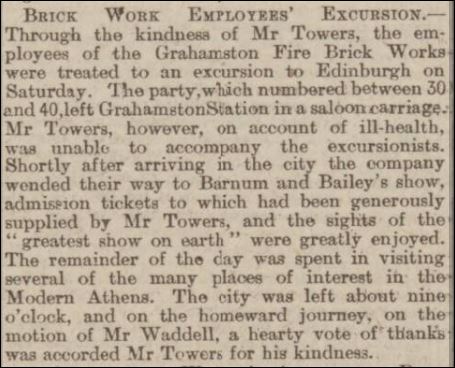 21/01/1899 – Falkirk Herald – … A new work has been started during the year by  Messrs Graham and Sons, Grahamston, the name of the firm being  Glenyards Fire Clay Company …

20/01/1900 – Falkirk Herald – The brick and fireclay goods trade – At Grahamston Fire Brick and Tile Works Mr Towers a very brisk year’s trade has been done.
In the Bonnybridge district, the firebrick trade has been probably more prosperous in the year 1899 than in any preceding year for 20 years, so far as the output of material is concerned, and the probabilities of the trade for the immediate future are bright.  One thing which has militated largely against the output, and kept it from being much larger than it ever has been, is the dearth trucks, the railway company being totally unable to supply adequately the requirements, in this connection, of the various firms in the Bonnybridge district.  Another serious item in connection with the manufacture of firebricks buying the year has been the repeated advance in the value of fuel, in addition to which wages have also gone up by leaps and bounds.  In the latter part of the year especially the coal questions become a more serious one, outstripping altogether any advances in the price of the material produced in this district.  The manufacturers, however, are taking steps to get this matter rectified as quickly as possible, coal having advanced in some places 125 per cent, during the year.  The same thing applies to the works in Bonnybridge and neighbourhood, and to most of the fireclay works in the west of Scotland.  It has been with the greatest possible difficulty that customers have had their supplies in time to meet their trade requirements.  In steelworks, ironworks, gas works, and foundries the same conditions have occurred, while every effort has been made by the proprietors of the brick and fireclay works during the year with the view of increasing the output to a greater extent than in the past, should, however, the iron and steel trade not make the same progress during the coming year as in the past, of course, those works will be largely affected thereby.  Exporting goods to various countries throughout the world has now become one of the principle branches of trade at some of the works in the Bonnybridge district, the countries to which goods are being sent including India, Canada, France, Russia, Belgium and Germany.  Prices are now very much better than they have been for some time past.

A new concern, the Glenyards Brick and Fireclay Company was started during the year for the purpose of manufacturing principally grate backs and similar goods.  Another serious drawback which masters have experienced during the brisk trade has been the irregularity of the workmen.  Especially is this the case, not only with regard to miners but also with regard to common labourers, who are a constantly moving body of men.  Many of the workmen could not be got to work more than four days per week.  This fact, together with the want of trucks, has caused much inconvenience to the manufacturers and has prevented them from getting the output which was necessary to meet their customers wants.

09/04/1904 – Falkirk Herald – The petition of J. H. A Towers, Firs Brick Works, Grahamston, to erect a chimney stalk 100 feet high and to take down the present one at Grahamston Fire Brick Works was granted.

28/07/1906 – Falkirk Herald – Stout lad (about 18) wanted to make himself generally useful about the works. Apply to Grahamston Fire Brickworks.

27/06/1908 – Falkirk Herald – It is with deep regret that record the death of Mr Alex. S. Towers, sole partner of the firm of J. and A. Towers, firebrick manufacturers, Grahamston, which took place at his residence, Woodlea, Russel Street, on Saturday last. The deceased gentleman had been ailing for a number of years with an internal ailment, to remove which he underwent several operations. Unfortunately, however, the malady seemed to have such a hold that could not throw it off. Amongst the last occasions on which he appeared in public was at the opening of the Grahamston Bowling Green some six or eight weeks ago, when he seemed to be in fair health, and conversed pleasantly with a number friends whom he met on the green. The late Mr Towers, who was 56 years of age, was a native of Grahamston, and the son of the late Mr James Towers, who half a century ago founded the firebrick works in Grahamston which was one the first businesses of the kind established in the district. On completing his education Mr Towers served his apprenticeship as a patternmaker in the Old Camelon Foundry. His father subsequently took him into partnership, and on his death some eighteen years ago Mr Towers succeeded him in the business, which, under his capable management, underwent considerable development. Mr Towers had a thorough knowledge of the firebrick making industry, and, being possessed of great energy and business ability, extended the influence of his firm far and near, the result being that its manufactures not only found an easy market in the Falkirk district, but were extensively sold all over the United Kingdom, and even abroad …

07/09/1912 – Falkirk Herald – Advert – Brickmaker – A Young man wanted, well up to making all kinds of grate back bricks. Apply to Grahamston Brickworks. 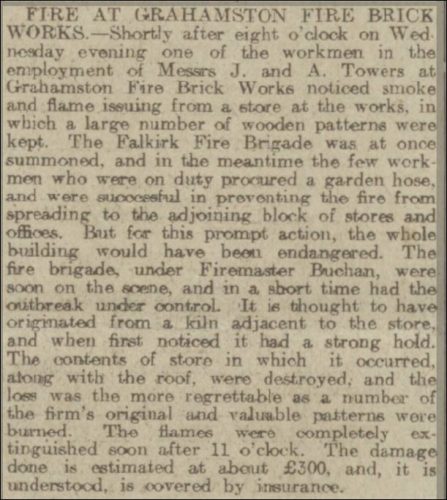 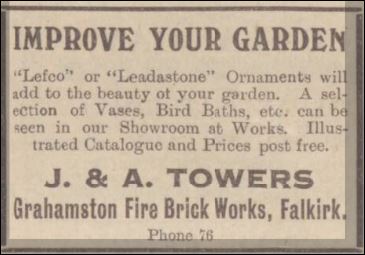 Below – 30/12/1939 – Falkirk Herald – Grahamston Works continued success and the popularity of the Ben series. 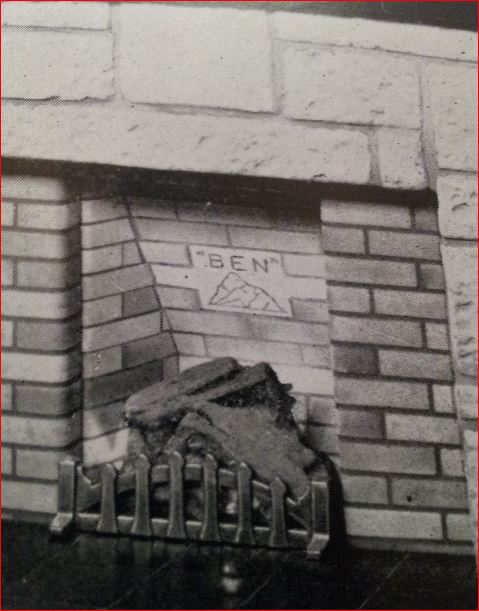 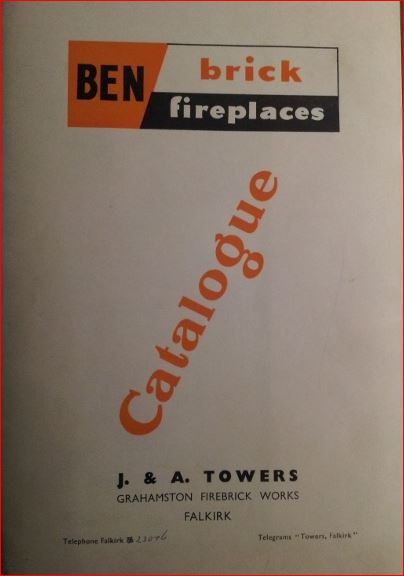 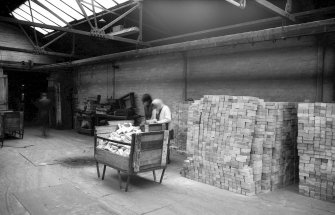 Grahamston Firebrick Works, Falkirk This shows the interior of the sorting and packing department, with piles of ‘baby’ bricks on the right, and a moveable brick bin to the left. The woman is examining each brick for defects before putting it on the pile. The size of the stock, a week before the closure of the works, hints at the reason for the closure. This works closed on 30 April 1971, and this photograph was taken on the last ‘making’ day, 23 April. The firm was still a partnership, between a Miss Winifred Towers and her father. As the moulds for the ‘specials’ were made of wood, the founding of the firm by a carpenter is not as unusual as it might appear. In 1971, this works was owned by the firm of J & A Towers, which had been founded in the early 20th century, but the works had been in existence since 1857. In 1971 they were making hand-moulded ‘special’ firebricks for foundries, and small machine-moulded ‘baby’ bricks used in building fireplaces for coal fires.

Site description – The firm started with a wooden hut situated as far from the road as possible. By the beginning of 1900, the works covered 2 acres, had 5 large kilns, the flues of which heated the drying sheds. Alexander Towers was responsible for the construction of a chimney stack in 1895 which was sufficiently high to satisfy the requirements of the Clean Air Act passed 65 years later. In 1966 a new showroom and set of offices were opened and by the time the works closed the site consisted of 4 large oil tanks, 2 small continuous kilns, one small intermittent kiln and 3 drying sheds. It also contained a dry press machine, 1 baby brick dry press and 4 fireplace machines ( 3 manual and 1 power).

The works were one of the last to be making bricks by hand in wooden or stucco moulds.

Markets: –  In 1889 the company sent products to Staffordshire, London, Manchester, Derby and Leeds. In addition, they supplied much of Scotland, having a ready market with various foundries. The company also had a good trade with Ireland, sending products principally to Dublin, Belfast and Londonderry. Exports of grog and other products were sent to Iceland and Holland. During the 1930s when their famous ‘Ben’ series was sent all over the country, 1 fireplace sold for 12 guineas. When the works were sold the same fireplace was costing £50.

Labour conditions: – The company started with between 18 and 24 employees. By 1890 there is evidence that there were 12 young girls and 6 men employed there. Eventually, 80 – 90 employees worked for the firm. Although many females were employed, particularly as hand moulders, some bricks had to be made by men because of their sheer weight. All workers began to work nightshift when the kilns were converted to continuous operation. The works employed a joiner, electrician and a bricklayer. All workers started at 0700 and had a break for breakfast from 0900 – 0930, lunch was 1230 – 1300 and they finished between 1730 and 1800. The workers are reputed to have preferred the early start so they could break for breakfast. The works had no canteen, but a room was provided near the kiln so that it was warm. A training scheme was introduced during the last 2 years of operation. The apprentice went to Falkirk College of Technology on a day release basis. No houses were provided for the workers, but after WW2 and its housing shortages, houses were purchased for the works key employees.

Tagged with: Firs, Glenyards, J and A Towers, J and R Howie, Roughcastle