08/06/1907 – Hamilton Herald – The following to be sold by auction – Thursday 20th at Hallside, Newton  – Quarry and Brickwork plant. (Note – SBH – this may not be the Newton Brickworks but I have added it to ensure the reference is recorded somewhere).

Below – 1934 – Location of Newton Brickworks as detailed by Robert Stewart, Blantyre ( Not depicted on the 1914 map). 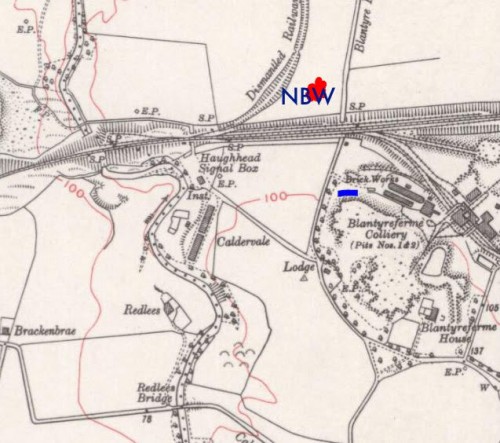 1947 – 1969 – The 1985 publication ‘A survey of Scottish brickmarks’ suggests that the National Coal Board operated these works during this time.

08/02/1963 – West Lothian Courier – National Coal Board. Central Area review. 1962 – The Central Area was formed at the beginning of the year by amalgamating the Central East and Central West areas … Brickworks – There are six brickworks operating in this area, namely Barbauchlaw, Blantyreferme, Gartshore and Gateside, Newton and Northfield. Some 54 1/2 million bricks were produced during the year. These works now come under the Brickworks Executive. which was formed earlier this year …

17/01/1964 – West Lothian Courier – Coal mining in 1963 … Whilst the six brickworks within the area are under the direction of the Brickworks Executive, the Production Dept. of the area continued to operate Newton Clay Mine to provide terra-cotta clay for Newton Brickworks.

1969 – 1976 – The 1985 publication ‘A survey of Scottish brickmarks’ suggests that the Scottish Brick Corporation operated these works during this time.