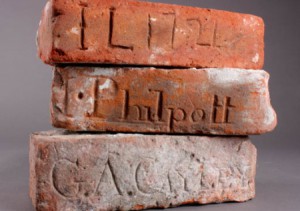 It is good to see a museum recognising the significance and importance of old bricks with regards to a country’s heritage and history. This page is reproduced with the kind permission of the Market Lavington Museum, England

The 3 bricks pictured below are absolute crackers – great finds and definitely well worth saving.

There is a long history of brick making in Market Lavington – certainly back into the seventeenth century. A suitable source of clay existed at Broadway where bricks were made through the eighteenth,  nineteenth and into the twentieth century.

Here we are looking at earlier bricks, using a photograph that was a part of the 2010 ‘Photographing Wiltshire’s Treasures’ project – an award winning collaboration between the Museum service and photography students from New College, Swindon. 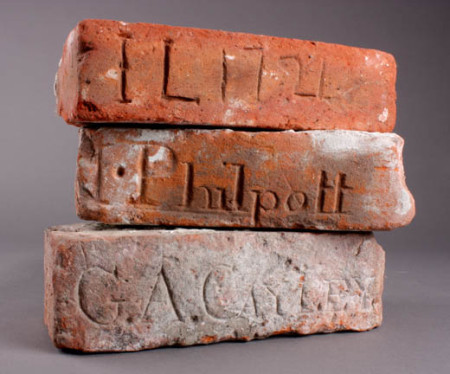 The three bricks shown were all made in Market Lavington. The top brick is stamped “ IL 1721” so we know the age, if not the manufacturer by name.

Next, we have a Philpott brick. The Philpotts had the brick works from about 1760 and well into the nineteenth century.

The third brick is stamped, G A Cayley.  Cayley is not a name which appears in Market Lavington records. Could it be that some written documents which have the surname ‘Crawley’ as an 18th century Market Lavington brick maker should actually say, Cayley?