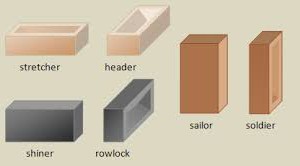 If there is a special project you have in mind and you are not sure how to accomplish it, it is handy to know that there are several “purpose-made” bricks to help. If you are not aware of them, there is a table below. We have also included the names of the various parts of a brick, and different pointing techniques you may need. 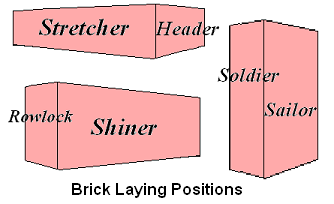 The bond of the brickwork in which the bricks are placed in a pattern of headers and stretchers gives the wall strength and stability.

English bond is made up of alternating courses of stretchers and headers. This produces a solid wall that is a full brick in depth.  English bond is easy to lay and is the strongest bond for a one-brick-thick wall.

Flemish bond is created by alternately laying headers and stretchers in a single course.  The next course is laid so that a header lies in the middle of the stretcher course below.

Stretcher bond is one of the most common bonds.  It is easy to lay with little waste and composed entirely of stretchers set in rows, offset by half a brick.

Header Bond – is created by rows of headers, only displaced by half a brick on each row. This bond is often used to create curved brickwork.

Stack bond – is a pattern made up of rows of stretchers with each stretcher centred on the stretcher below it.  All joints run vertically down the entire wall.