Home / Non Scottish brick articles / The hen and the brickmaker 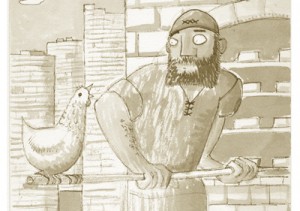 Once, in times too past to ponder, there was a happy brickmaker who worked his field of clay. Arms stained red, he baked the bricks with sweat and woodfire, laughing a governor’s laugh with his customers and his kin.

That day, and only then, a hen came to see the brickmaker. She picked her way across the clayfield, pretty as could be, right up to the great hot oven where the brickmaker laboured.

“Kicks and wicks and candlesticks!” said the hen.

The brickmaker looked up from his bricks and blinked, unsure of what had just happened.

The brickmaker narrowed his stymied gaze, trying to hone in on what he was witnessing. He had been wholly unaware of the phenomenon of talking animals until that moment, and this was a lot to absorb.

“Words that rhyme … with ick?” he finally offered.

“Ticks and Picks” the chicken nodded. “Fix the nicks!”

“BRICKS! BRICKS! BRICKS! BRICKS! BRICKS!” screeched the hen, and she squawked about the clayfield in a fluttering panic. The brickmaker, stone still, watched nervously as the crazed hen zigged over tables and zagged into his oven. She clacked on bricks and burrowed under coals and then, abruptly, the hen was still.

A moment passed, and the brickmaker found he had to sit down, with a slant of religious concern in his eyebrows and the smell of dinner wafting through his work-place.

The moral of the story is: Some experiences will not teach you anything!