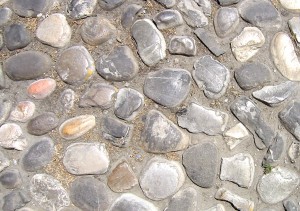 Before tarmac became almost ubiquitous in the forming of Scottish streets there were various materials, tools and practices associated with traditional street masonry. Cobbles were often referred to as “cassies” or “causseys”. This should not be confused with a “sett” which was generally rectangular as opposed to a cassie which was rounder or irregular in shape. The mason responsible for making these cobblestones was known as a “cacier”. When cobbles or setts were being cut to shape the thin offcuts which were produced were known as “cornisers” which were sometimes set vertically in the ground to form a surface which would be less slippery for horses to travel on. This was also known as “horonising”.

An alternative street masonry material was flagstones which were often referred to by their place of origin, Carmylie flag and Caithness flag being two of the best-known types. Flag stones were sometimes poetically called “snow-flags” because they were broad and flat like a snow flake. Alternatively, they were known in the North East of Scotland as “pentilsteens”, “plainstones” or “plennies”. If the flagstones were square in shape they were sometimes referred to as “quarrels”. Long and narrow flagstones, on the other hand, were “trinks”.

Having got the masonry unit of whatever type in place it would then need be “dunted” into place with various tools being used for this operation. A “bishop” was a heavy piece of wood used to ram down street masonry (a larger version of the priest used in fishing). Another term for this was the “cassie dunter”. Sadly the production and use of these types of traditional Scottish street masonry is very limited today but hopefully, this short note will get people to glance down and appreciate the plennies, trinks, caussies or setts on which they walk every day. 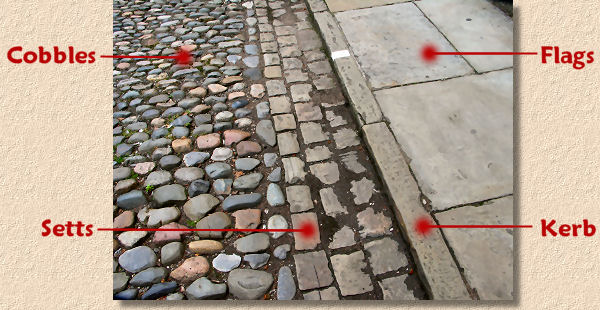