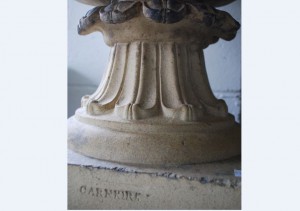 The Garnkirk company was founded opened for business in 1832, by Mark Sprot. He had purchased Garnkirk House in 1811; the Garnkirk Colliery and Brickfield were created nearby. The name was later changed to the Garnkirk Fireclay Company. The fireclay used to manufacture firebricks and firebrick products quickly gained a reputation for very high quality and an exceptional light colour. A business in brick, glazed water pipes and other architectural items expanded into beautiful objects for the garden. By 1833, it became apparent that the ornamental products they made for gardens were a growing and important part of the company. Garnkirk garden ornament was said to “exhibit pleasing forms and a soft mellow shade of colour, harmonising admirably the hue of foliage and turf”. This reference comes from the Horticulturist, in an article published in July of 1848 – Sotheby’s auction catalogue 1999.

Info – A wonderful article on Garnkirk urns – with interesting info on link the possible sculptor Luigi Isepponi. Note the Garnkirk warranted stamp. Could the W W on either side of the stamp be the sculptor? 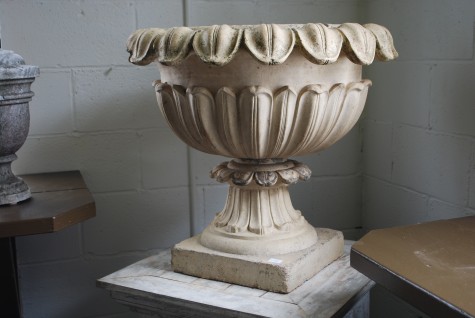 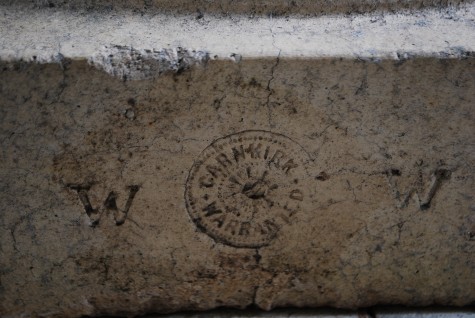 Below – 3 photographs taken by Ian Suddaby of 2 beautiful chimneys seen in a salvage yard near Aberdeen. They bear the same W W on either side of another ‘ Garnkirk Warranted’ mark. (Note from SBH – Does anyone know what the WW stands for?) 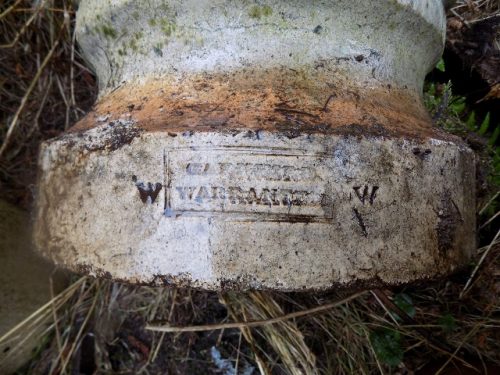 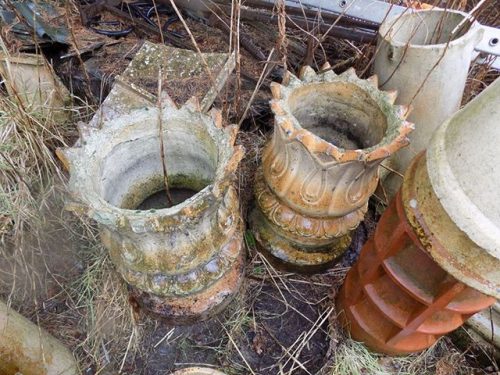 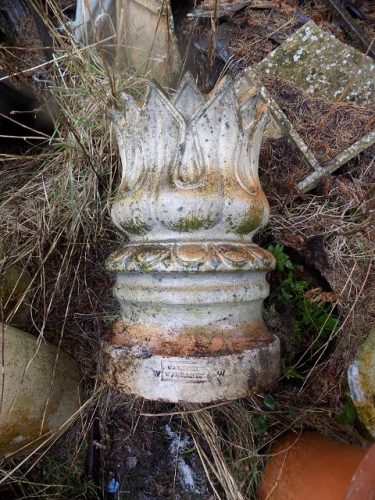 … I understand that several well known sculptors may have been associated with Garnkirk. Luigi was not famous although he did exhibit at the RSA Edinburgh and in Glasgow in the period from 1830 to 1836.  George Quail in his book ‘Garnkirk Clay’ said that many workers in Garnkirk were Irish, although there was also an Italian called Luigi. Luigi lived in the parish of Cadder as noted in the 1851 census and other family records.

In 1851  he married a local girl, Mary McLachlan. By 1863 he was apparently living in Dunfermline. He has an entry in the Henry Moore Foundation record of sculptors. You will see he has sculpted the head of Mark Sprot and there is a piece featuring Mark Sprot’s son with a husky dog. – “Master G. Sprot and North Pole Dog” My grandfather’s mother was Jessie Isepponi … Luigi’s daughter. She married Henry Lamont. There are several brick makers mentioned on that side of the family. The family eventually lived in and around Dunfermline.In the Faculty of Advocates Library in Parliament Square where there is a huge terracotta piece called the Florence Vase.  Mark Sprot gifted this piece. Luigi exhibited a miniature of this vase in an RSA  exhibition. Death mask of Burke (William Burke (1792–1829), Irish-Scots serial killer) – A family story has been handed down that Luigi was preparing to make the death mask of Burke when he was taken down from the scaffold. He was aged around 20. When air escaped from Burke’s body Luigi fled the room in terror. What I have since discovered is that Luigi was a pupil of Samuel Joseph who is said to have made the mask. It is highly likely that Samuel was teaching Luigi. Luigi most certainly made death masks as a receipt for 2 were traced.

Luigi died in Dunfermline on 24th March 1871. I think he may have been born around 1810 but that is a guess. His name is in the Post Office Directory for Edinburgh for 1831. The first mention of him is in the previous year when he exhibited at the RSA. He arrived before most Italians and pre- passports. The name belongs almost exclusively to an area of Switzerland which is Italian speaking.
01/04/1871 – Dundee Courier  –  Deaths  – At Baldbridgeburn, Dunfermline on 24th ult, Louis Isepponi, modeller, aged 62 ( Forename variation and rather harsh calling him a modeller!)

Isepponi (sometimes called Iseppone or Isappone) was a student at the Trustees Academy in Edinburgh in 1830, having previously worked as an assistant to Samuel Joseph. From an address at 15 James Square, Edinburgh he contributed several works of sculpture to the Royal Scottish Academy exhibition in 1830. Sadly, one of his busts was destroyed at some point during the process. Isepponi unsuccessfully petitioned the Trustees for reparations, saying that ‘I cannot afford to lose this sum small as it is.’ The Trustees refused, claiming that a waiver for responsibility for damages – added to the catalogue notes one year later in 1831 – was to apply retrospectively to this case. They did, however, say that they were ‘very sorry’ (MS RSA Letters, and Outgoing Letter Book 1830-33).

Isepponi continued to exhibit at the RSA until 1835 and exhibited with the Glasgow Dilettanti Society in 1834. He was involved with the Garnkirk Terracotta Works, which was established on the estate of Mark Sprott of Garnkirk House in 1832, and several of his exhibits were made in Garnkirk terracotta (7, 9, 11, 15). He was still living in Garnkirk at the time of the 1851 census. He died in Dumfermline in 1871, aged 60. 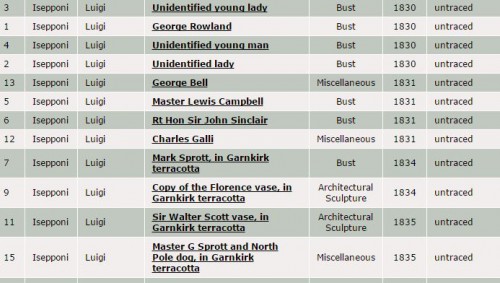 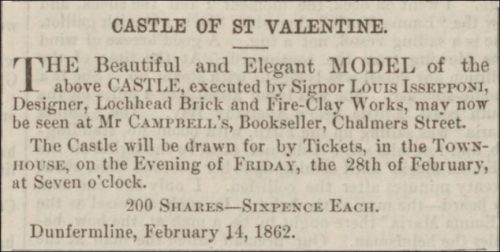 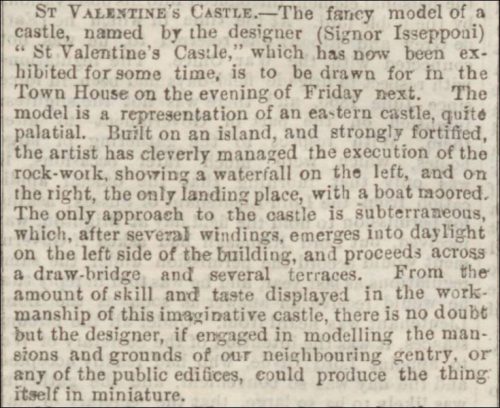 Below – 16/02/1865 – Fife Herald – The bust of the late Erskine Beveridge by Signor Luisi Issapponi of the Fire Brick and Tile Works, Lochhead. 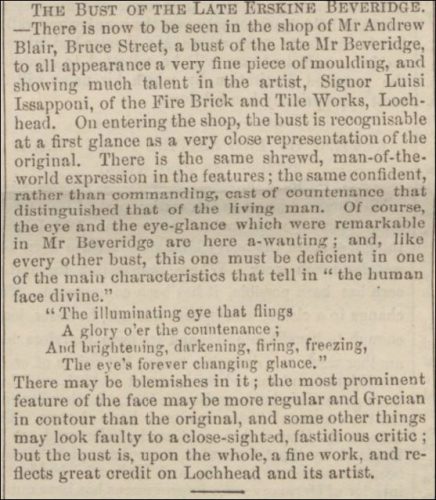 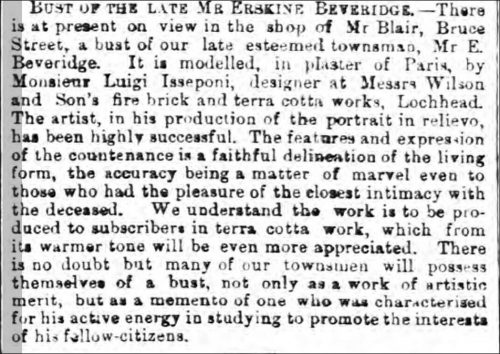 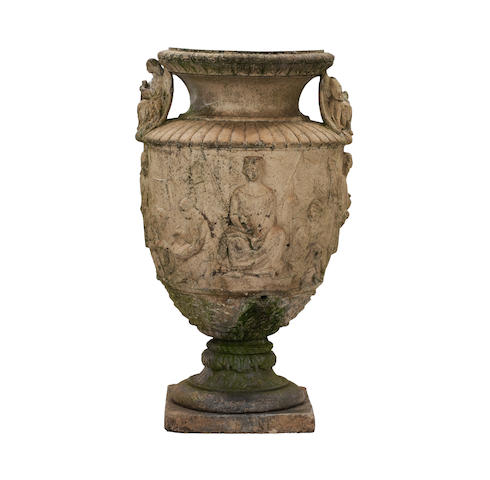 Below – The Nuptial Vase. 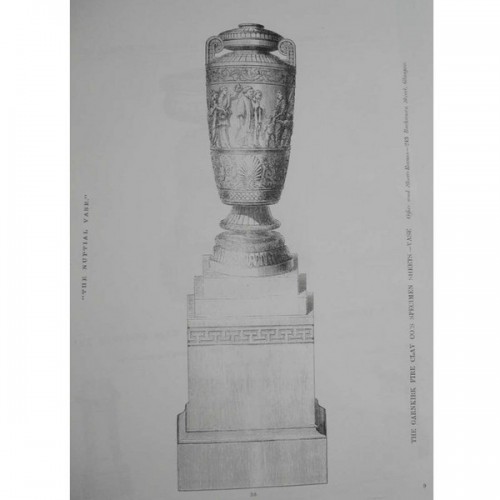 Attributed to the Garnkirk Fire Clay Works of Buchanan Street and St Rollox, Glasgow. This well-known model is a copy of the Roman original found during excavations in 1792 by Gavin Hamilton at Gabii on the outskirts of Rome; purchased by Napoleon in 1807 it is now in the Louvre. 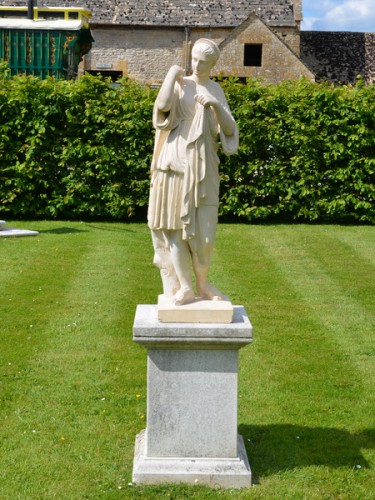 Below – The Garnkirk Florence Vase  –  This urn was presented to the Signet Library, Parliament Square, Edinburgh in 1841 by Mr Thomas Sprot who was a director of the Fireclay company and a member of the Society. (Note – SBH – I do not believe the sculptor of the urn has been identified or confirmed. Can anyone clarify?) 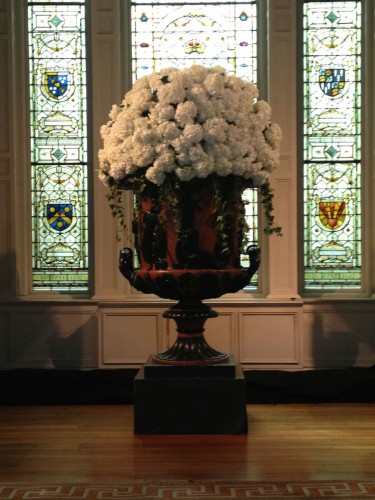 1834 – 1835 –  To inventors, patentees, mechanics, manufacturers etc. The important advantages derived from the Caledonian Museum of Practical Science, by giving publicity to the works of artists, in every profession, and bringing forward ingenuity and merit, must be obvious to all; and as a national institution requires only to be known to be appreciated. On Scotland never before was such a boon bestowed, and it has already proved how much it was wanted. By the exhibition of models, and other productions of art in the museum, and thus concentrating attraction, much more efficient information is conveyed to the country, and the inventor and manufacturer more benefited than by any other means, although made at considerable expense.
The extensive circulation of the catalogues and advertisements, specifying the productions forwarded to the museum, could not be affected by any individual exertions, and the result of this must be evident to the inventor and manufacturer of every class … Warwick and Florence Vases, from Garnkirk fire clay, by Isipone.