1863 – Bell and Hornsby letterheads of 1893 state that Bell, Hornsby & Co were established in 1863 and reference the Polmadie Brickworks, Glasgow and the Langlands Brickworks, Govan on the same letterheads. The brickworks may not have been established at the same time as the Company.

26/10/1875 – Glasgow Herald – Langlands Brickwork, West End of Govan. Sale of 10 valuable draught horses and several useful ponies. Filly, rising two years nearly thoroughbred, out of celebrated West Country mare by Mr Houldsworths thoroughbred, Czar. 1 lorry in good order (to carry 5 tons). 1 lorry with portable sides (light, suitable for furniture &c), 6 close carts, harness &c.(The property of Robert Dempster Esq and others who are reducing stock owing to the completion of contracts and the close of the brickmaking season). James Laird has received instructions to sell as above, today (Tuesday) 26th October commencing at 12 o’clock. Langlands Brickworks is a few minutes walk on the Langlands Road, southwest of the car terminus.

08/10/1877 – Glasgow Herald – Extensive sale of horses. Sold owing to the close of the brickmaking season. On Thursday 11th October at Brickwork, 625 Eglinton Street, Glasgow at 12 noon. Sale of 40 powerful draft horses and 20 bogie ponies. (The property of Messrs Gilchrist & Goldie; Wilson & Sons, McIntyre & Sons; Bell, Hornsby & Co; Corbet; Steven; Dempster; Wallace and others). Hutchison & Dixon beg to announce instructions from the above firms to dispose of by auction, the horses and ponies used by them during the summer season. They will be found well suited for placing upon immediate work and the ponies are worthy the attention of coal masters. Amongst the principal lots are –

09/04/1879 – Glasgow Herald – Properties for sale by private bargain and in whole or in lots. 1. The lands of Langlands in the parish of Govan consisting, so far as not already feued. of 18 1/2 acres or thereby, of eligible feuing ground with the minerals therein, consisting of coal and ironstone. There is a considerable rental derived from the buildings and brickfield on the lands. 2. The lands of Merryflatts adjoining Langlands, consisting of 30 acres or thereby, eligible feuiug ground, with the minerals therein, consisting as abore. A considerable part of the price of both properties might be allowed to lie on bond. The feu duty is illusory in both cases. Mr John Gribbin, residing at Upper Merryflatts will point out the boundaries of the lands. … 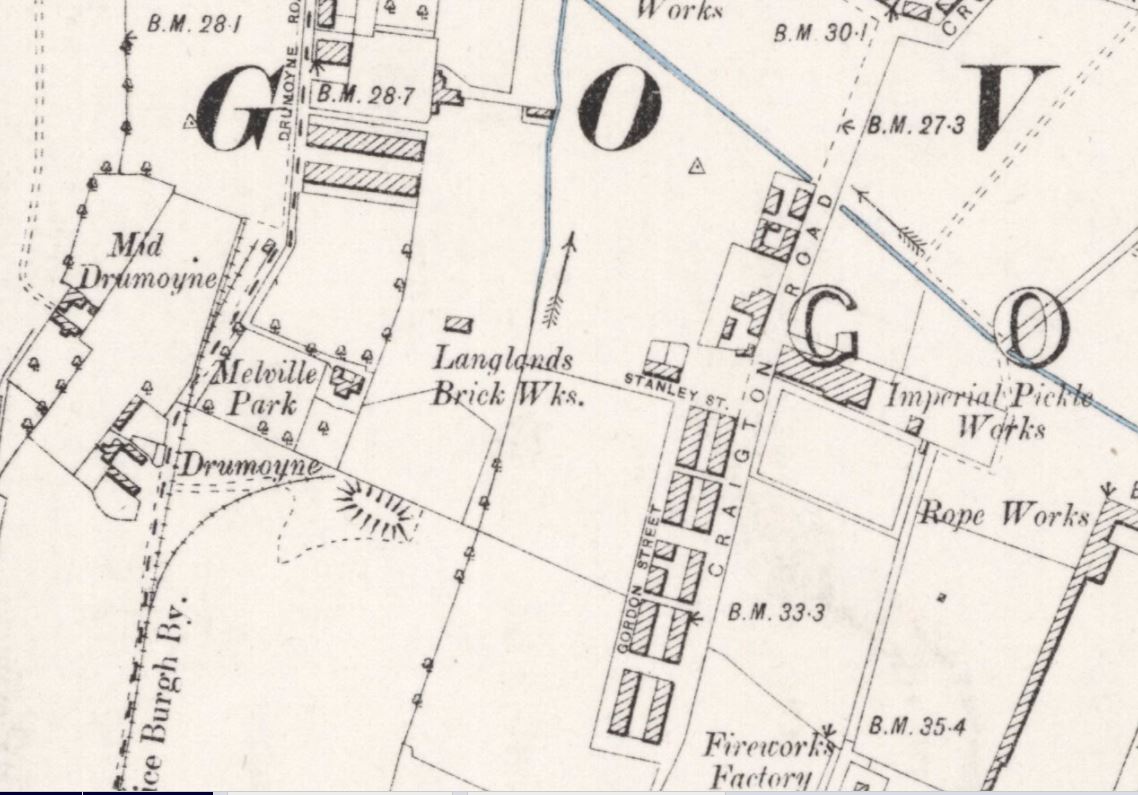 Source – Bell, Hornsby & Co. – Mason and brickwork contractors – Bell, Hornsby & Co. were a building and contracting firm, and one of many brick manufacturers in the Glasgow area. From the 1860s to the 1890s, local brick was widely used for factories, and for the internal and rear walls of stone-faced commercial and domestic buildings). Of the original partners, Alexander Hamilton seems to have been the longest-established, manufacturing bricks at Lilybank off Eglinton Street, on the south side of the city, from about 1852.  He expanded into tile making, operating from a second brickworks at Strathbungo in 1858, before becoming a ‘silent partner’ in Bell, Hornsby. Another partner, Robert Bell, possibly ran a bricklaying firm in South Wellington Street c. 1857 (He is not to be confused with the wealthy Wishaw and Broxburn industrialist of the same name, who was also a brickmaker). Other partners were John Thomson Hornsby and Alexander Whitelaw, a Greenock based builder.

The firm of Bell, Hornsby first appears in the Glasgow Post Office Directory for 1864 as ‘brickmakers, builders and contractors, based at Hamilton’s premises.  Bell, Hornsby and Hamilton at first all lived beside their works, before moving elsewhere. They shed a partner in 1868 when Whitelaw chose to continue on his own.