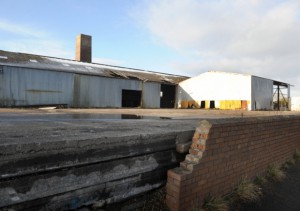 The name Millstone possibly derives from  … The first paper on the list, which was contributed by Mr L. W. Hinxman and Mr M. MacGregor, dealt with the distribution and geological position of the fire -clays and ganisters of the South of Scotland. The materials at present used in Scotland in the manufacture of high-class refractory goods are chiefly confined to the Millstone Grit strata between Glasgow and Bonny bridge, on the western side of the central coalfields. This localisation of the fire -clay industry, more marked even than that of the oil shales of the Lothians, though from a different cause, is primarily due to the fact that the industrial centres of the West, with their blast-furnaces, foundries, steel, glass and chemical works, have created a Large and increasing market for refractory materials, both raw and manufactured. Ample supplies of suitable fire-clay were fortunately found to exist in the neighbourhood of these centres and thus, while rocks of millstone grit cover considerable parts of the South of Scotland, it is only as yet in certain limited areas that their economic possibilities have been adequately tested. P291

Beta L – For use in Ladles, Tundishes etc.

The Works were built at Masonfield near Jawcraig by the Alloa Coal Company. Building started in January 1937 and by June 1937 the kiln was almost ready for use. Production was well underway by September 1937.

Raw materials were obtained from the Carbrook Mine at Torwood. The Company stopped the production of common bricks in 1964 and concentrated on refractories, including firebricks, cement, castings, high alumina products, castable products, gun mixes and aluminous jointing cements.

Jawcraig Brick Works in Falkirk date from the inter-war years and were closed in the 1970s. During World War II the works were owned by Stirlingshire Brick Works Ltd but were under care and maintenance and out of production. At the time of their closure in the 1970s, the works were operated by Craigend Refractories Ltd. The works were rebuilt and re-opened in 1987 but mothballed in 1993.

This view is looking east along the 18-chambered, oil-fired Belgian kiln which was under a steel-framed cover. The Belgian kiln was patented in 1891 and was developed from the Hoffmann kiln. Both types are brick-built and barrel-arched. Belgian kilns fire at between 1,200 and 1,300ºC.

Jawcraig manufactured ‘common’ bricks. In a British Geological Survey report of 1985, it was measured that common bricks accounted for over 80% of Scottish output. Bricks found at Jawcraig in 1980 were marked ‘FALCON A’ and ‘KESTREL’. (These were manufactured by Craigend Refractories Ltd)

Stirlingshire Brick Company made common bricks and it is thought their brand was the ‘STERLING’ brick. A reference in the Bradley & Craven Machine Order Book suggests that Jawcraig Works were owned and/or operated by Robert Thomson in 1937.

06/02/1937 – Airdrie and Coatbridge Advertiser – Good news was forthcoming last weekend with the announcement that a brickwork would be started at Jawcraig by the Alloa Coal Company. Although it may not employ a large number of men, it is nevertheless a good sign and the benefit will be felt in many quarters. Work on the building of the premises is starting immediately.

14/03/2014 – Falkirk Herald  – Controversial plans for a waste treatment site near homes in the Braes have been approved by the Scottish Government. The approval will allow storage, treatment – including lime treatment – and distribution of organic waste at the old Jawcraigs brickworks site near Slamannan. It was originally refused by Falkirk Council. James McCaig Farms, which owns the site, appealed the decision and this was upheld by Scottish Government Reporter Lance R Guilford who concluded that the “…proposed development is consistent with the relevant provisions of the development plan and that there are no material considerations which would justify refusing to grant planning permission”. Residents – the closest being 100 metres from the site – are concerned about noise, smells and traffic the plant will create. Mr Guilford included six conditions for the planning approval to go ahead. Upper Braes Councillor John McLuckie, who was part of the planning committee which refused the plans, said: “I’m disappointed in the decision but happy that there are conditions attached.” Andrew McCaig said: “The site will create new jobs and bring new investment to the area.” Central Scotland MSP, Margaret Mitchell was also “disappointed” at the decision. She said: “It is yet another example of the centralisation of decision making under this SNP majority government. “Here the wishes of a local community and the detailed considerations and concerns laid out by Falkirk Council, in refusing this application, have now been ignored and overturned by the Reporter. “Furthermore the conditions attached to the planning consent approved by the Reporter when he overturned Falkirk Council’s decision to refuse, will give little or no comfort to the local community. “The fact of the matter is that in this economic climate when councils are facing cuts to their budgets local Authority rarely have the resources to police or enforce these planning conditions.” Falkirk East MSP Angus MacDonald welcomed the Reporter’s decision. He said: “I have been working with local residents, SEPA and Falkirk Council since last summer to try to resolve the effects that the business at Wester Jawcraig Farm is having on the local community. “I welcome the Reporter’s decision to allow planning permission – bringing the process indoors will allow the business to continue to operate with less of an impact on nearby neighbours, provided the conditions set out by the reporter are adhered to. “I will continue to work with SEPA and Falkirk Council to make sure that the site is monitored and any concerns that my constituents have are addressed.”

Below – The Scottish Industrial Archaeology Survey published a report in 1985 entitled ” A survey of Scottish brickmarks. During the compilation of this report in which the survey officers visited working and derelict brickworks sites, many items of interest were donated or found. Many of these items were thereafter donated to the National Museum Scotland. The item below is one of these items. An iron stamping plate marked ‘Sterling’. 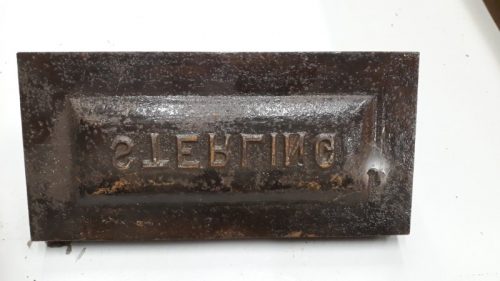