The Works belonged to the Earl of Zetland on whose land they were situated. Production was carried out by a manager. The original works were rebuilt in 1863 – 1864 and most recent evidence for the existence of the brickworks is from the Slaters Advertiser 1886.

Transport was via the Forth and Clyde Canal and later a railway siding which connected with the Grangemouth to Falkirk railway line.

David Dowie, John Murray and John Smith have all been managers.

The Kerse Brickworks appear to be where Helix Park is situated now.

30/04/1823 – The Scotsman – On sale – Slates, bricks and tiles – The subscribers having made arrangements with the proprietors of the Aberfoil Slate Quarry and the Kerse brick and tile works, whereby they are enabled to sell these articles on the most moderate terms, will always have a stock of them on sale at their Wood Yard, Port-Hopetoun and will deliver cargoes at any part of the Union Canal. Borthwick’s & Co, Leith Saw Mills 26/04/1823

1847 – Bonnyside Brick and Tile works – Records of the Kerse Estates 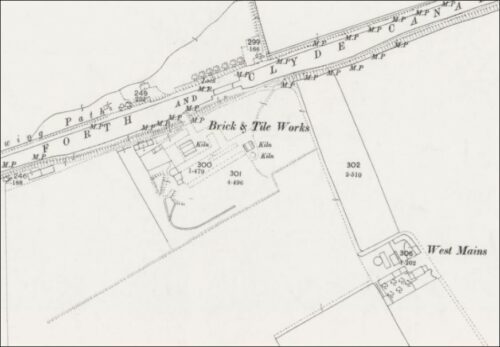 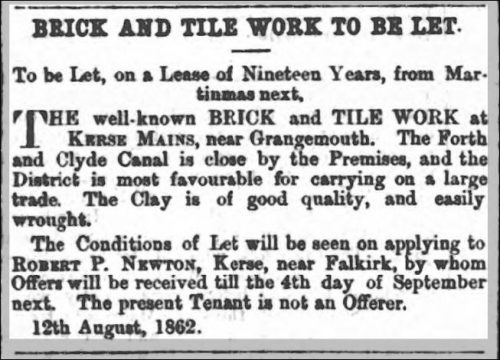 1867 – John Murray, Kerse Brick and Tile Works, Falkirk. (Note – SBH – This may be the same John Murray as that who operated the Kelvinside and Possil Brickworks, Glasgow. I have kept the tag links separate meantime until this is confirmed).

06/02/1879 – Falkirk Herald – Peter Baird Plasterer and slater … I can confidently recommend Peter Baird as being a thorough efficient workman, he, having acted as a foreman with my late father for a number of years. John Murray Kerse Brick Works 03/02/1879. 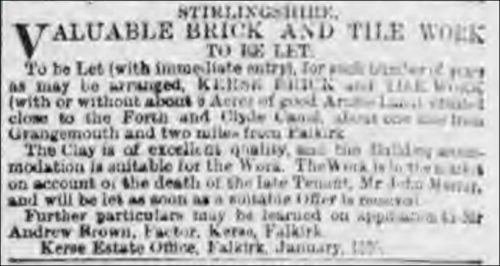 30/05/1914 – Falkirk Herald – Master Slaters Sudden Death – The death occurred somewhat suddenly on Saturday night of Mr Peter Baird, master slater, residing at North Bridge Street, Grangemouth. Mr Baird, had as usual been out during the day and on his return home in the evening he was attacked with illness, death ensuing about an hour afterwards. Deceased who was aged 76 was for a long number of years a foreman with the late Mr John Murray, brick and tile manufacturer, Grangemouth …