08/08/1903 – Airdrie and Coatbridge Advertiser – A young woman named Mary O’Neil, brickworker residing at the Double Dandy Row, Carfin, while at her work in Holytown Brickwork, had her skull fractured by coming into contact with a revolving belt connected with the shafting. She was removed to her home, here she lies in a precarious condition.

11/11/1921 – Motherwell Times – Death has removed from our midst, Mr Gilbert McCall of Carfin Street, whose demise took place early on Monday morning following a brief illness. Mr McCall held the position of foreman at Messrs James Nimmo & Co.’s Holytown Colliery Brickworks for many years and was highly respected by the community. A widow and grown-up family who are left behind to mourn the loss have the sympathies of many town’s people extended them in this their hour of bereavement. 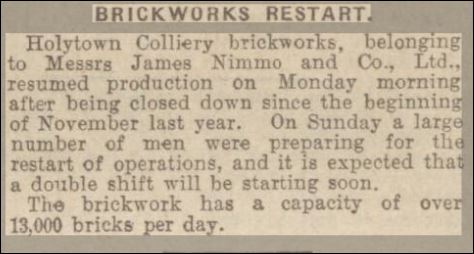 21/04/1937 – The Scotsman – Holytown Colliery Brickworks – Lack of sufficient pressure of steam during the morning and early afternoon has caused the officials of Holytown Colliery Brickworks (James Nimmo & Co, Ltd.) to confine production entirely to the back shift, from 3 pm till 11 pm. The brickworks reopened three weeks ago after being closed down for several months, but it was found that the ordinary colliery machinery made such demands on the steam supply that production of bricks was badly hampered. To get over this difficulty the back shift has been inaugurated, and it is expected that satisfactory outputs will result in steady work for the employees.

24/09/1937 – Bellshill Speaker – Youth injured – A 19-year-old New Stevenston youth, Patrick Ratcliffe, who resides at Stevenston Street, New Stevenston, employed at Holytown Colliery Brickworks, met with a serious accident to his right foot, on Wednesday night. It appears that Ratcliffe, who was working the night shift, had only commenced his work a few minutes when he met with the accident. He was oiling the machinery when his foot became entangled in a wheel. His cries for help attracted the attention of another workmate, who immediately stopped the machinery. A doctor was quickly on the scene, and after medical attention, the injured youth was removed to the Glasgow Royal Infirmary.

03/01/1938 – The Scotsman – At Holytown, where the brickworks are working fulltime, it is understood that another pan mill is to be erected which will give employment to additional men.

22/04/1938 – Bellshill Speaker – Breakdown at colliery – Owing to a breakdown in the electrical plant at Holytown Colliery, New Stevenston, belonging to Messrs James Nimmo and Co., Ltd., on Sunday, the backshift, who prepare the coal – workings for the dayshift the following morning were thrown idle and had to return to their homes. Electricians were summoned to repair the plant and restore the supply that the colliery might resume as soon as possible. A brickwork associated with the colliery which uses the same electricity supply was also thrown idle by the breakdown and the Sunday shift at the brickworks had to be withdrawn for the day. The brickwork was also idle Monday. Some 200 men in all were affected.

03/05/1939 – The Scotsman – New Stevenston Colliery to close down – It was learned last night that Holylown Colliery, New Stevenston, belonging to Messrs James Nimmo & Co., Ltd., is to close down. Although the notice to this effect has not yet been posted at the colliery, yesterday the tradesmen received official notices from the Company which stated that they regret that they will have to terminate their agreement, and the colliery will close down on May 13. This news has come as a severe blow to the district. The colliery, which is one of the oldest in Lanarkshire, employs about 300 workers. The closing down of the colliery has been a double blow for the brickworks adjoining are also to close down. The material used for the manufacture of the bricks was taken from special debris underground. Over 60 brickworkers will also be affected.

12/01/1940 – Bellshill Speaker – Brickworkers in New Stevenston district received good news during the week when it was learned that New Stevenston Brickworks are to be reopened at the beginning of next month. The brickworks, which adjoin Holytown Colliery, New Stevenston, closed down along with the colliery several months ago. It is learned that the entire plant has been overhauled and electricity is soon to be installed by the Clyde Valley Electrical Company. The electricity was previously obtained from the colliery, but the electrical plant here has been dismantled. The brickworks have an output of 10,000 bricks daily and a good number of people will gain employment.

29/03/1940 – Motherwell Times – Brickworks early resumption – A resumption of work is fully expected at Holy town Brickworks, New Stevenston, within the next two or three weeks. Workmen engaged in building work ceased employment at the beginning of this week, and it is stated that the electrical supply to operate the machinery is soon to be fitted up. For this purpose, a new electrical powerhouse has been built. There is the likelihood of women again being employed at the works. During the Great War, women operated most of the machinery, and this practice was continued until three years ago. Previously material for the manufacture of the bricks was obtained from Holytown Colliery which adjoins the brickworks and is now dismantled. It is expected that men will be employed to convey the material from the colliery bings to the machines. 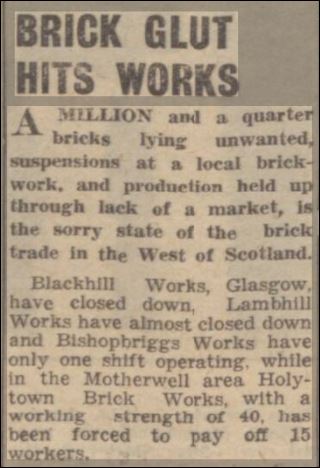 27/01/1950 – Motherwell Times – Holywell Brickworks speed up – Production at Holytown Brickworks was speeded up on Tuesday by an extra 12,000 bricks per day. This was achieved by putting on another shift, and now makes a continuous working process of 24 hours day. To cope with a full day’s output of 40,000 bricks two new kilns have been built and others are to be erected later.

Below – 14/11/1975 – Wishaw Press – Advert for the Scottish Brick Co and promoting bricks manufactured at their Holytown and Northfield Brickworks.