George Mossman (1823 – 1863)  – A close friend and associate of Alexander ‘Greek’ Thomson, he produced the Classical frieze on his Garnkirk Urn, which was commissioned by the Garnkirk Coal Company as their exhibit in the Great Exhibition, 1851. This was later exhibited at their fireclay showroom in Buchanan Street and in the exhibition Alexander Thomson The Unknown Genius, held at The Lighthouse, Glasgow, as part of the City of Architecture celebrations, 1999. The Urn is now on display in Kelvingrove Art Gallery and Museum.

Thomson’s buildings are, however, rich in incised Greek ornament and other details such as acroteria, column capitals, decorative ironwork and his ubiquitous urns and Egyptianate chimneypots, the latter manufactured by the Garnkirk Coal Company which commissioned Thomson and George Mossman to produce The Garnkirk Urn as the firm’s exhibit at the Great Exhibition of 1851, and which was later modified for use as a finial on Thomson’s cemetery monuments (e.g., the Beattie Monument, Necropolis). Source 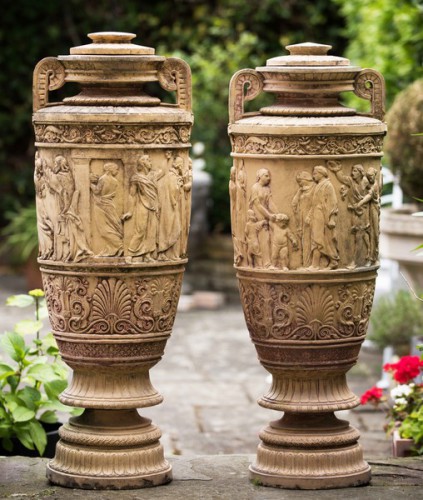 A Pair of 19th century Garnkirk fireclay Nuptial Vases designed by Alexander ‘Greek’ Thomson (1817-1875) and modelled by John Mossman (1817-1890). Alexander ‘Greek’ Thomson was a visionary Scottish architect whose reputation was founded on a combination of commercial success tempered with a need to instil the mystical and exotic into his commissions. He rejected the Gothic style that prevailed in Britain in the 1850s and 1860s and strove to resuscitate the principles of Greek architecture.
The current vase manufactured by Garnkrk Coal Company and depicting a bridal procession on the frieze is an early example of how he managed to combine Greek principles and industrial design. A coloured example was shown in London at the Great Exhibition of 1851 and is now on display in Glasgow’s Museum and Art Galleries. 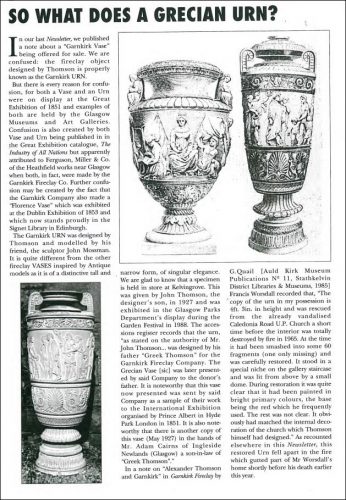