When examining brickmarks it soon became evident that many letters were reversed. The letters ‘S’ and ‘N’ are by far the most frequent to find in reverse.

There could be several reasons for this including:-

1. Perhaps illiteracy of some form. This could be an issue in older bricks by many 20th century bricks also have reversed letters and I doubt if illiteracy will have been an issue in these cases.

Below – An old Greenhill brick with many issues regarding the letters! 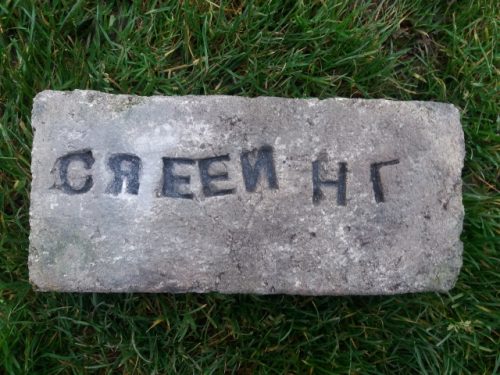 Although in the case of the above Greenhill, I have 10 or so bricks with the letters reversed, missing or upside down, all of different combinations, however, they are always in the correct order. In this case, I think the hand moulds were falling apart and each morning the brick moulder shuffled the letters in the mould to make what he thought was the word ‘Greenhill. He always got them in the correct order but because he was having to set them in reverse he often placed them the wrong way around or upside down – just my theory!

2. Perhaps it was a gimmick, a method of trying to highlight the brick to customers – a design feature.  Many companies today misspell words, etc as an advertising ploy – eg they use a Z instead of an S.

Perhaps this is such an example – Patent Loudon & Russell Newmains and assuming the N of Newmains is also reversed that would be 7 reversed letters on this stamp – 4 x N and 3 x S. I have found 3 of these exact stamps in 3 entirely different locations in Scotland which makes me think this was a deliberate reversal of letters. 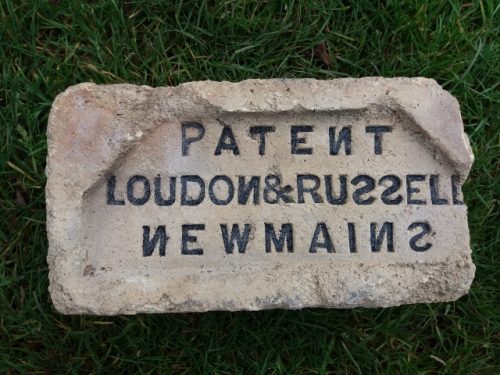 3. Perhaps someone was trying to get one back on the boss or the company for some reason and deliberately set the brick stamp up wrongly!

4. When creating a brick stamp you do so in mirror image so it may be that someone simply got mixed up when creating the stamp in the first place … a genuine mistake.

5. I was told by an ex-employee at a Scottish brickworks that often the brick making machine stamp would break and a letter would drop out of the stamp. Someone would notice this during quality control as the bricks come off the conveyor but stopping the machine was time and money so the foreman would get someone to try and replace the letter while the stamping mechanism was up in the air – between stamps – this usually meant snapping out the broken letter and shoving in a new one but because this was done at lightning speed the new letter was often placed the wrong way round and if it was they would continue the run rather than stop the machine.

6. Sometimes it is not just letters that are wrongly set but the whole name as in this brick which should read ‘ADAM’. 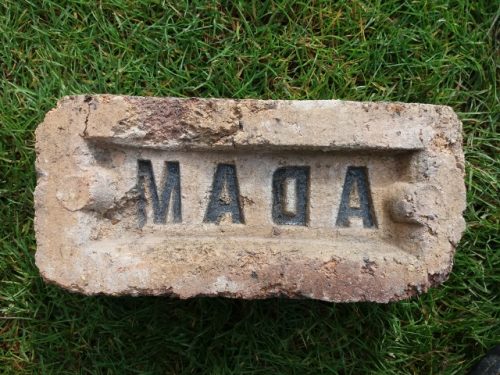