01/01/1824 – The Scots Magazine  –  Glasgow – There have been a great many additions built to the old cotton mills in Glasgow this summer besides the new ones erected in various parts of the city. One of the mills is calculated to cost £40,000. This has been altogether an unprecedented year of building. Masons, bricklayers etc are still kept busy as they were in the midst of the summer and new hands can scarcely be got for money; and it is expected that the same spirit and activity will continue in the ensuing spring. The consumption of stones, bricks and other materials for building, has been so great that a number of the quarries and brickfields are exhausted and there is in consequence, a considerable rise in the price of these articles. Bricks which sold in the early part of the season at 25s per 1000 are now 40s per 1000. There are numbers of new brickfields to commence in the ensuing spring in addition to the former old ones, and the workmen are engaged at higher wages on that account. Builders, in general, are in high expectation that the new grand opening at the Cross or Trades Land will commence in the spring of the year to give full scope to their energies and the ultimate ornament and improvement of the city – Glasgow Chronicle.

19/11/1920 – The Scotsman – Question of brick supply – In a review of the position of Glasgow’s housing schemes up to the present, Mr Peter Fyfe, Director of Housing, points out that the erection and completion of 57,000 new houses have to be faced.  Scottish bricks are in short supply and the cost of importing from England is too great. They wish to establish their own Works to manufacture bricks and is proposing to start a small works at Drumoyne. 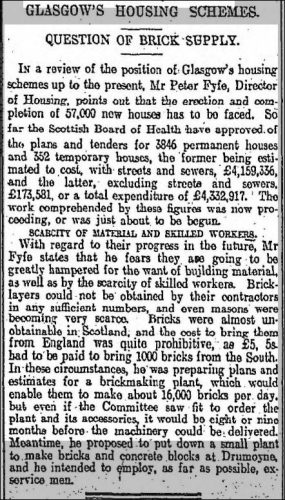 Below –  26/11/1920 – Kirkintilloch Gazette – Labour and brick shortages and transport costs from England. 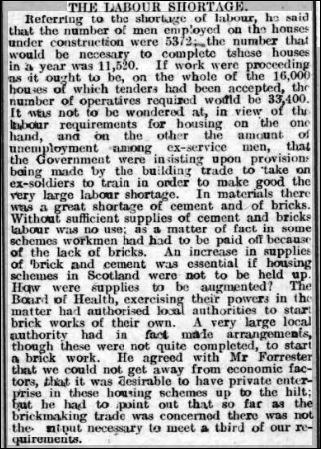 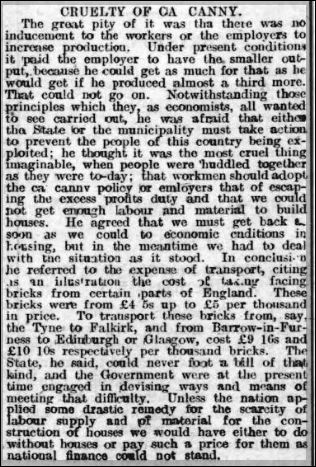 Below – 05/02/1921 – Fife Free Press – Due to brick shortages, Kirkcaldy Council contemplates building a brickworks to make bricks for their housing schemes. 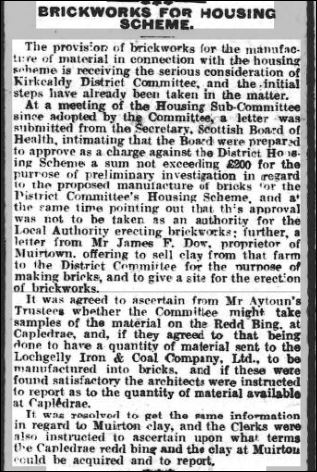 09/06/1921 – Hull Daily Mail – Dundee Housing Committee is to ship bricks from Denmark for use in the city’s housing schemes. The bricks are to cost £2 5s per thousand less than is being paid for British made bricks at the present time.

10/08/1921 – Dundee Evening Telegraph – Housing difficulty – Cost of bricks from the continent – Mr James M. Dow, the housing architect for the Upper District of Renfrewshire in his report for the month of July submitted to the Housing Committee, observes that with the exception of the main sewer, no progress was made with the houses in Newton Mearns during the month. The Department of Building Materials Supply has been unable to secure bricks and the Board of Health are unwilling to agree to the high rates being asked by manufacturers for bricks obtained in the open market. “I have obtained consent to the purchase of 10,000 bricks from Caldwell Brickworks the rate of 120s per 1000, but I’m obtaining quotations from other sources. Large supplies of Continental bricks will shortly be available, and I have secured an option over 75,000 of the first shipment at a price of 105s per 1000 f.o.r. at Grangemouth. ” I fear, however, that plus the railway carriage the bricks will cost more than if obtained locally and I am endeavouring to arrange through the Board for the bricks being discharged in Glasgow or failing that, for a supply of local bricks being sanctioned.

10/12/1921 – Airdrie and Coatbridge Advertiser – County housing schemes. Price of bricks reduced. Progress of building. A report to the District Committee of the Middle Word by Mr P. C. Smith, Housing and Town Planning Engineer, shows the progress made on the various sites for the month ending 29th November. In the early part of the month (he says) the Board of Health intimated that with the intention of lowering the prices of bricks, all contracts with brickmakers should be brought to an end. This had the effect of somewhat disorganising work on most of the sites. To overcome the difficulty the Board of Health granted authority to import bricks from Germany. 650,000 of these were received and allocated to the various sites. About the end of the month brickmakers intimated a considerable reduction in prices, and it is anticipated that there will be no difficulty in placing orders in future. The only difficulty now will be the ability of the makers to keep the supply equal to the demands. Mr Smith gives a report on the progress at the various sites …

05/05/1933 – Dundee Evening Telegraph  – In the Glasgow and West of Scotland area work at many housing schemes has been held up because of a shortage of bricks. Supplies of bricks for the west country come from Shettleston, Bishopbriggs, Nitshill, and Conkerhill. Applications have been made to brickmaking firms to increase their output, but they have replied that to increase supplies they would require to enlarge their plant considerably, and as they regarded the building boom as a temporary phase, the present increased demand did not warrant the additional expenditure on the plant. This phase of the brickmaking industry is interesting as indicating the many complications in industrial conditions in this country. It is not surprising that the brickmakers are not inclined to spend much money on new plant because of a rush demand for bricks.  Many British industries have been penalised by rushing development to meet surprise demands, with the result that over-production has despoiled markets and caused stoppage at works and unemployment. There seems to be scope for action by Scottish development organisations to investigate conditions with a view to the working out a policy for our industries. Under the present conditions, many new industries may be wrecked by rush ventures. The canning industry in England is complaining that rush ventures are complicating the situation for growers and for the canning concerns. Shortage of bricks in the West of Scotland has brought forth suggestions from the Amalgamated Union of Building Trades Workers that the regulation laid down by Glasgow Town Council, that only new bricks should be used, be reconsidered. It is pointed out that there are thousands of tons used bricks from demolished houses which could be used for housing schemes. The bricks are said to be of good quality and perfectly suitable for building houses. As a matter of fact, used bricks are utilised for building work in many quarters.

09/08/1933 – Kirkintilloch Herald –  To all appearances, operations have commenced for the building of the County Council houses at the foot of the School Brae. The difficulty will probably be the scarcity of bricks which is holding up buildings throughout the Country. 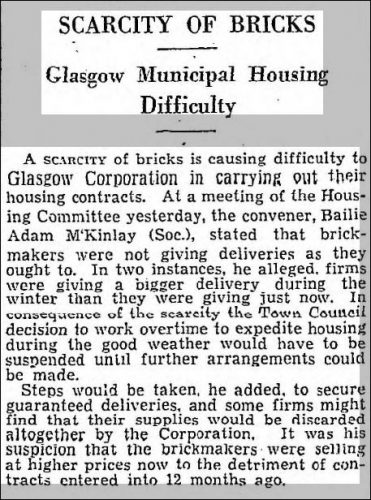 Below – 27/11/1942 – The Scotsman – Glasgow Council plan to move from bricks to concrete slabs for house construction.

25/05/1945 – Linlithgowshire Gazette – Some of the causes of delay in house building were revealed at the meeting of the County Council Housing Committee on Tuesday. There it was stated that houses at Winchburgh are being held up because of a shortage of bricks. The convener stated that there were a million and a half bricks at Pumpherston, but under present rules, these cannot be used for Winchburgh as the Ministry specify that brick from Edinburgh must be used. Accordingly, the houses at Winchburgh must wait and the bricks at Pumpherston must lie idle. We have heard complaints that the Pumpherston bricks are oily and so are not favoured by builders, but Bridgend Village is built of them so one assumes there cannot be much wrong. In any case in times like these ones would think that bricks from anywhere would be welcome. The saving in cost of transport by using local bricks should also amount to something worth considering. If bricklayers can be induced to lay 800 bricks per day as was demonstrated to be possible last week then the gap between economic rent and the cost of the house would be further reduced. This apparently stupid action on behalf of the Ministry is fairly typical of a good deal of Government control. Yet people cry out for more of it. Its a case of a fine theory not working out in practice. 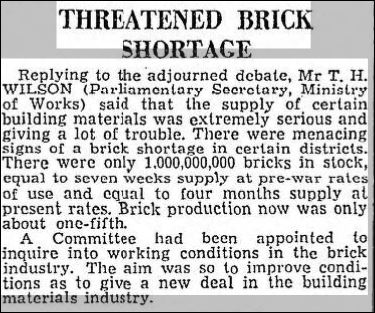 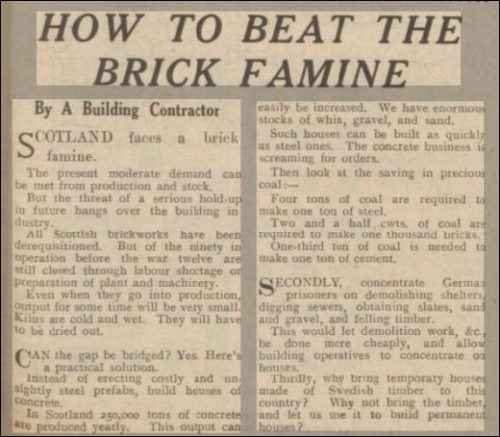 08/06/1946 – The Scotsman – Relieving brick shortage – In the House of Commons yesterday, in a written reply to Mr Naylor (Lab. Wourthward South East), Mr Tomlinson, Minister of Works, stated he was aware of the shortage of bricks in Scotland and had already made arrangements for bulk deliveries over a period, of 15 – 20 million bricks from the Fletton area of England to Scotland. They would be delivered by special trainloads to certain points in Scotland and would there be sold at the average ex-works price of Scottish produced bricks.

Below – 12/07/1946 – Aberdeen Press and Journal – Pick your job for prosperity. Brickmakers are sure of good wages for years ahead. 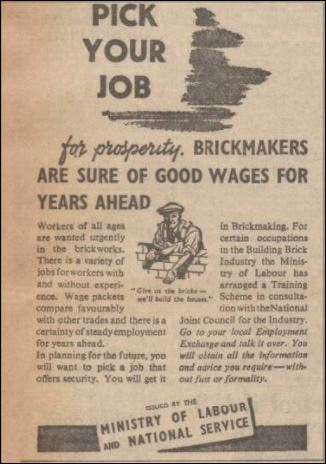 17/07/1946 – Falkirk Herald – Mystery explosion on Dutch vessel – Beached near the Forth Road Bridge – … The Presto was carrying a cargo of 50,000 bricks from Antwerp which have been brought over to relieve the brick shortage in Scotland. No damage was done to the cargo, but bedding and food in the crew’s quarters were ruined by the water and oil …

02/04/1947 – The Scotsman – Dispute over foreign bricks. The dispute between Whitburn Town Council and the Department of Health for Scotland over a consignment of about 250, 000 Belgian bricks for the Whitburn housing scheme has ended with the Department’s decision that the bricks are to be used for inside walls only. The Belgian bricks were ordered at a time when home brickworks were unable to cope with the abnormal demands. By delivery date, however, the home supplies were much easier, and pending negotiations with the Department, the Town Council would not permit contractors to use the bricks as they were dissatisfied with the quality.

04/06/1947 – The Scotsman – More bricks likely –  Steps are said to have been taken towards increasing production of bricks, the shortage of which last year was so acute that arrangements had to be made for importing 20 million bricks from England and 50 million from Belgium. The pre-war figure of production is given as 56 million a month and a table shows that since last October the output in Scotland fell month by month to 34,273,00 in February. The average daily output per man has also fallen almost progressively from 591 last September to 450 in February.

22/07/1950 – St Andrews Citizen – Brick shortage for the Dunedin Housing Scheme – … The Department of Health has been in communication with the Methil Brick Company and are informed that they are endeavouring to supply one load per day to the Alliance Construction Company. An inquiry might be made at the National Coal Board, Cowdenbeath for supplies as the increased cost of the Lochside or Alloa bricks would appear to be related to the haulage costs from these areas …

Below – 31/07/1951 –  Berwickshire News – Berwickshire County Council is to send a deputation to the Secretary of State for Scotland to discuss the present shortage of bricks in the County.

21/12/1951 – Hawick News – The housing committee of the Town Council in Hawick are considering building timber houses in Hawick. This is due to housing progress having recently been handicapped by the scarcity of certain basic materials including bricks and the Secretary of State considers that the erection of a proportion of timber houses would make better progress possible without straining the supply of bricks and other scarce materials required for traditional and non traditional houses already included in the Scottish housing programme … 24 of the timber houses would be built at the north end of the Burnfoot Scheme.

05/01/1952 – Airdrie and Coatbridge Advertiser – The owners of Rawyards Brickworks, now closed, are being asked by Airdrie Town Council what difficulties exist to prevent a resumption of their activities. The Council have decided to offer their assistance to obtain authority to have the brickworks re-opened as a slight difficulty has been created locally owing to the shortage of bricks. 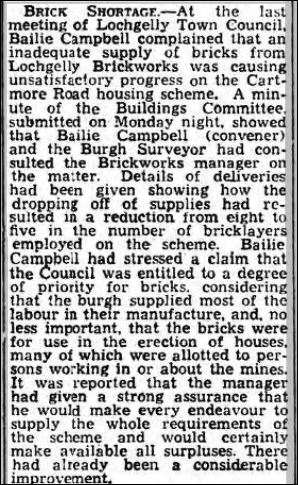