Alexander Dougal – 1828 – 1899 –  as a young man was at Rentonhall Brickworks, Morham, East Lothian, (learning the trade ? ) About 1859 he was at Forgandenny Brick & Tileworks as a tenant. By 1869 he was back in Linlithgow, and Winchburgh Brick and Tile works had begun. With 2 of his sons in the business, Winchburgh Brickworks continued beyond Alexander’s death in 1892.

31/05/1849 – Perthshire Advertiser – The subscriber begs to inform his friends and the public that he has on hand at all times a large stock of drain tiles of all descriptions and, from their quality and lowness of the terms, will be enabled to compete with any in the district. The tiles can be put on the Railway Waggon in the tilework, and forwarded from Forgandenny Station, Scottish Central Railway. Orders to be taken in at the work by George Thomson. Alexander Kerr, Manager. Forgandenny Tilework, 11/05/1849.

25/12/1851 – Perthshire advertiser  – Tenders wanted for the raising of several thousand cubic yards of clay at the Forgandenny brick and tileworks, according to conditions to be seen at the work. Offers to be lodged with John Graham, manager on or before Saturday the 3d January 1852. Forgandenny Tileworks 23/12/1851.

23/05/1857 – Perthshire Advertiser –  Forgandenny Brick and Tile Works. W & G Dougal beg to intimate that they have taken a lease of the above well known works and are now prepared to supply the Public with first-rate brick and tile at very moderate prices. 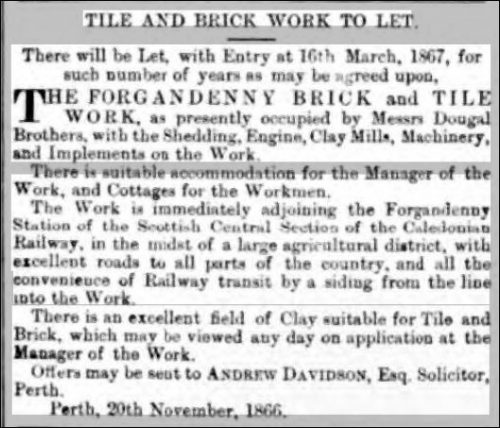 10/08/1871 – Perthshire Advertiser – Forgandenny .. Mr Dougal, tile manufacturer was unanimously re-elected as a member of the parochial board for the forthcoming year.