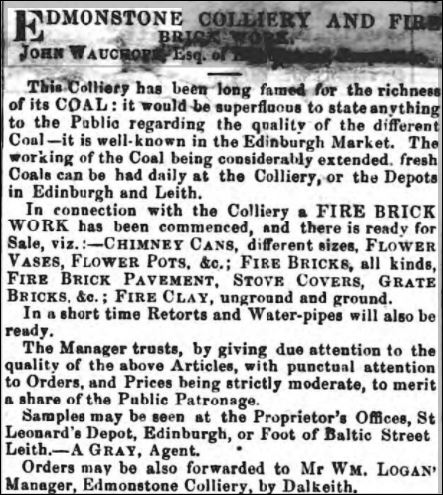 1852 – Highland and Agricultural Society of Scotland – Collection of articles in fire clay from the works of John Wauchope Esq, of Edmonstone consisting of vases, pedestals, chimney tops etc, of very elegant designs. Particular attention was drawn to a fire clay oven for kitchens, handsomely mounted with a metal doot etc. 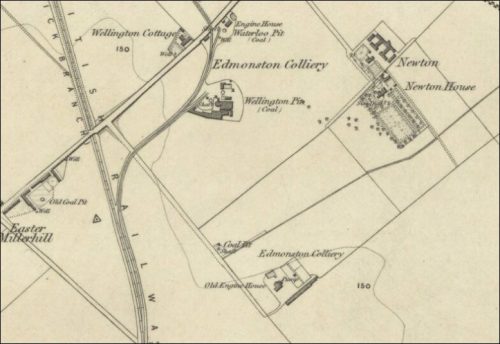 1854 – 1855 – Edmonstone Coal and Fire Brickworks. Edinburgh. Office, St Leonard’s Depot, Edinburgh. A regular supply of Edmonstone Coal can be had as above, or delivered in any part of Edinburgh. Also fireproof  Chimney Cans, Flower Vases, Fire-Brick, Fire-Brick Pavement. Orders sent to Andrew Gray, Proprietors’ Agent, will meet with prompt attention.

11/08/1854 – Elgin Courier – The Highland Society’s Show – Held in Berwick  … The following collected numerous groups of spectators … an exhibition by Mr Wauchope of Edmonstone of a collection of chimney cans, flower vases, pedestals for vases, hearth cheeks and other articles made of fire clay at the Edmonstone colliery.

09/08/1854 – North British Agriculturalist – The Highland Society’s Show – Held in Berwick … There appeared a meagre display of everything connected with drainage. One pipe and tile making machine, and some specimens of draining pipes, comprised the whole of this group; but the clay department was well relieved by a profuse exhibition of fire-clay manufacture, consisting of many elegant designs in vases, columns, pedestals, and chimney tops, besides a great variety of the useful in fireclay, such as bricks of all kinds, furnace blocks, &c., the whole from the manufactory of John Wauchope, Esq. of Edmonstone. 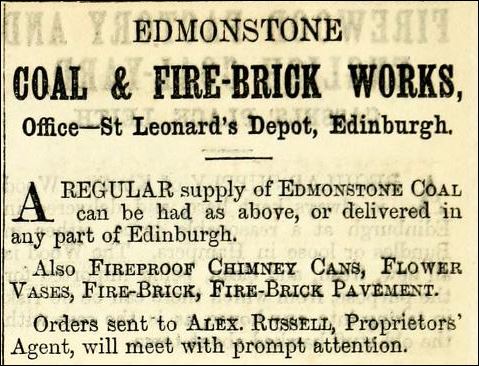 14/08/1856 – Stonehaven Journal – Highland and Agricultural Society’s Show at Inverness – Wednesday 6th. – Among other articles on the ground in which interest was shown were … flower vases, ornamental chimney cans, encaustic tiling and fire clay flooring from Edmonston near Dalkeith. 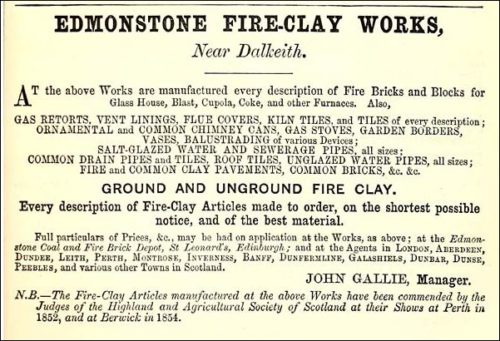 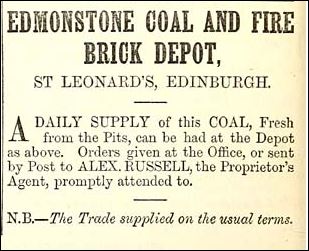 23/07/1860 – The Scotsman – Salt-glazed fire clay sewerage and water pipes. The Edmonstone Coal Co is now manufacturing the above pipes of all sizes and of first-rate quality at very moderate prices. Inspection invited. The works are situated within a 3-minute walk of Millerhill Station, N.B. Railway.Depots St Leonards, Edinburgh and Sands, Leith. Edmonstone Colliery, Millerhill, near Dalkeith.

01/09/1860 – The Scotsman – Prize medal – Highland and Agricultural Society’s show at Dumfries 1860 – The Edmonstone Coal Company were awarded the medal for their salt-glazed fire clay sewerage and water pipes and which are to be had at their depots, St Leonards, Edinburgh and Sands, Leith. Prices are very moderate. Coals for shipment at Leith or Fisherrow at reduced rates. Edmonstone Coal and Fire Brickworks,  Millerhill by Dalkeith.

03/12/1860 – The Scotsman – Fire Clay Sewerage Pipes – The Edmonstone Coal Co is now in a position to supply the above glazed and unglazed pipes and other fire clay articles on the most reasonable terms. Coal for shipment at Leith and Fisherrow. Edmonstone Coal and Fire Clay Works, Millerhill near Dalkeith.

21/03/1861 – Southern Reporter – Fatal Accident – On Wednesday, a lad about 16 years of age named Robert Davie, was working about the flywheel of an engine at Edmonstone brickwork, when it is supposed from the steam not having been properly turned off, the wheel began to revolve and struck the lad a blow to the head, which killed him instantaneously.

26/08/1861 – The Scotsman – Pressed common and composition bricks of first-rate quality to be had at Edmonstone Brickworks and depots. St Leonards and Leith at 28s per 1000

03/04/1863 – Caledonian Mercury – Extensive sale of Colliery Plant – the whole of the steam engines and other colliery plant used in the extensive coal fields belonging to Sir John Don Wauchope of Edmonstone near Edinburgh comprising of … 1 brick kiln 39 x 11 x 12.

11/06/1863 – Southern Reporter – Extensive sale of glazed sewage pipes etc at the Wellington Brick and Tile Work.  Sir John Don Wauchope having let his brickworks and being anxious to clear off his stock of pipes, to make room for his tenant, has instructed me to offer for Public Competition (without the slightest reserve) on Monday, the 15th June 1863, the following, viz. :-

29/04/1865 – Edmonstone Estate Rental Book no 2 – Lease start date. William Brown. Included is the ground occupied by the brickwork at Millerhill with houses, sheds, machinery and utensils and Wellington House and Garden.

27/05/1868 – To brickmakers – Wanted at Edmonstone Brickwork, Dalkeith, a person to set and burn bricks by contract. 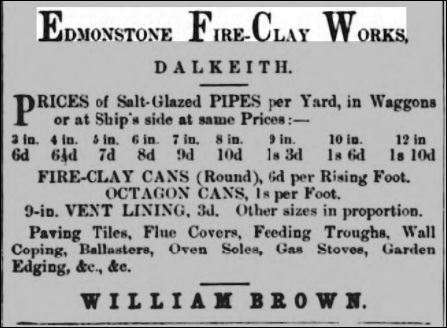 05/10/1871 – Stonehaven Journal – Edmonstone Fire Clay Works, near Dalkeith, are convenient for shipment at Fisherrow, Leith and Granton. Having rails into the Works can send off goods by rail on the shortest notice. The yearly increase of the Works speaks for the cheapness and quality of the articles manufactured. William Brown.

17/10/1878 – The Scotsman – Man wanted that can make himself generally useful in repairing machinery to assist for a few weeks. Fireclay Works, Millerhill.

1880 – Edmonstone Estate Rental Book no 2 – New lease start date. 21 years until 1901. H & R Rigg. Included is the ground occupied by the brickwork at Millerhill with houses, sheds, machinery and utensils and Wellington House and Garden.

19/11/1884 – Glasgow Herald – Edinburgh bankruptcy court – H & Rigg & Company, of the Edmonstones Fire Clay Works, Millerhill, near Dalkeith, appeared for the examination in bankruptcy at the Edinburgh Bankruptcy Court, before Sheriff Rutherford. Hugh Rigg, the senior partner, deponed that he began business at Millerhill on 08/03/1880. Before that time he had been the manager of the Polton Coal Company’s pits at Polton for about 15 years. He started in life as a coal miner but subsequently contracted for sinking pits and output of coal. When the company was started he had saved about £900, and when the Polton Collieries and Brickworks were sold he should have got £1400 of the price realised, which was £14,000. He bought 100 shares in the new limited company and afterwards purchased 10 shares. Mr Eaglesham, who had been a partner in the brickwork business, furnished him with money to pay for the shares to the extent of £800 which he was due bankrupt on the sale of the brickwork. The shares, he thought, were in payment of the brickwork. The only cash payment in connection with the sale of the brickwork which he and his two brothers received from Mr Eaglesham was £382. That would be in 1882. He considered that Mr Eaglesham was due them £269. The state of affairs as submitted by bankrupts showed liabilities to be £4072 3s 10d, and assets £3021 0s 1d, leaving a deficiency of £451 3s 9d. The examination was adjourned.

Below- 13/11/1886 – The Scotsman – Engines, boilers and fireclay goods for sale at Edmonstone Brickworks. 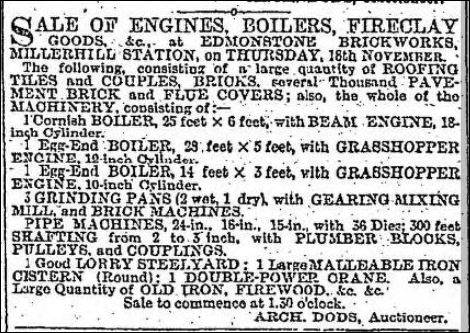 11/08/1887 – Dalkeith Advertiser –  … Several public works in the neighbourhood have now ceased to exist – among others, the Dalkeith Coal and Brickwork, Westfield Iron Works and Millerhill Brickworks …

Below – By 1893 the Edmonstone Collieries have disappeared. The Edmonstone Iron Works sits to the SW of the old Wellington Pit. 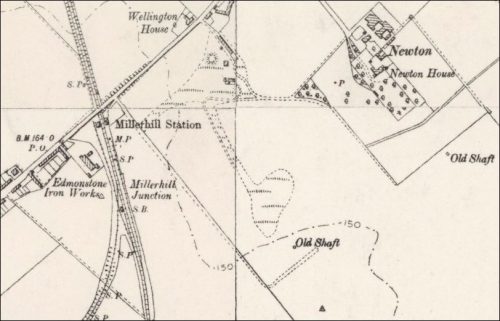 Below – Edmonstone Patent – this brick has been stamped on both sides with Edmonstone patent but then both sides have been over-stamped in the opposite direction with the same wording but of a different font. Found by Ian Suddaby in the Portobello area. 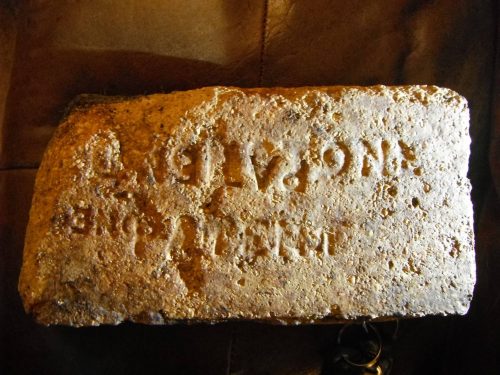 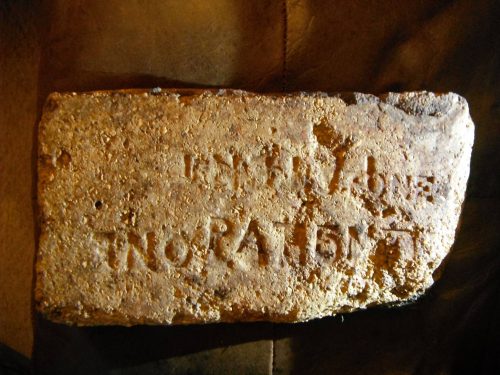