(Note – SBH – I am uncertain as to whether references to the ‘Vogrie Brickworks’ refer to the Vogrie Brick and Tile Works at Newlandrig or the Vogrie Coal and Fire Clay Works at Gorebridge).

25/03/1863 – North British Agriculturist – Boiler explosion at Cockpen. Between eleven and twelve o’clock yesterday forenoon, an explosion of one of the boilers at Emily coal-pit, (Arniston Colliery) parish of Cockpen, took place, but, fortunately, although two parties were injured, without loss of life. A large portion of the boiler was blown to a distance of 600 yards, and the remainder was strewn about the work. There are five boilers built alongside this one, and by the explosion one of these was broken and removed to a distance of about twelve yards. There were about fifty men working at the pit-head, and an adjoining brickwork when the explosion occurred; but although stones and bricks, along with scalding water and steam, were thrown about in every direction, the only parties injured were Robt. Davidson, labourer, Redbeugh, who had his collar-bone and some of his ribs broken, and a labourer residing at Gorebridge, who had his right leg bruised. The explosion having deranged the machinery, about 160 pitmen will be thrown out of work until it is repaired. 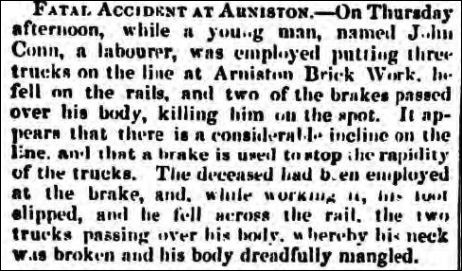 Below – 03/03/1874 – Arniston Coal Co, Edinburgh – The company was incorporated and this included the Arniston Brickworks … A valuable clay field worked to much profit is attached to and taken over by the Company, in connection with the Colliery, and regarding which Messrs Geddes and Landale are of opinion that the profit will probably yield one per cent on the full capital and that irrespective of the Dividend on the Colliery … (Full details are printed in the newspaper) 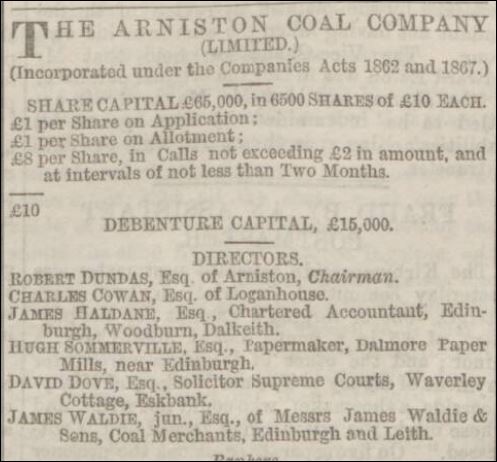 14/04/1877 – Alloa Advertiser – Letters from John Christie to Henry Stirling at Clackmannan brickworks regarding alterations made at Arniston Brickworks.

2 Lansdowne Crescent,  Edinburgh, 3rd December 1874.
Dear Sir,-Yours of the 1st has been forwarded to me from and in reply to your application I have no hesitation in saying that the concentration of the smoke outlets of the rectangular brick and tile kilns at Arniston into two dwarf chimneys was a decided improvement, both as regards to consumption of fuel and the diminution of smoke, and you need have no scruple in recommending or carrying out any alteration similar to what you did then, for the attainment of similar results. Yours truly, John Christie. Mr Henry Stirling, Brickworks, Clackmannan.
The above kiln burns smoke saves one-third of coal and time and makes a better job.

2 Lansdowne Crescent,  Edinburgh, 5th March 1875.
Dear Sir,-I am in receipt of yours of the 21st ult.,  and consider the Pan Mill with Perforated Bottom delivering into the horizontal Pugmill underneath.  Such as we fitted up at Arniston. a decided improvement on the ordinary Pan Mill, especially when composition Bricks are made from shale and common clay; but it is equally well suited for Fire-Clay.  From the regularity of the mixture in the former description of bricks, a better Article is produced, as no small stones can get through the bottom, which, in the ordinary mode of milling clay, causes considerable breakage after the Bricks are burned.  Yours truly, John Christie.  Mr Henry Stirling, Brickworks, Clackmannan.
The above mill produces bricks, twenty per cent better article than the old pan and pugmill and not one broken in place of ten. Plans, &c., furnished, £10 for each. 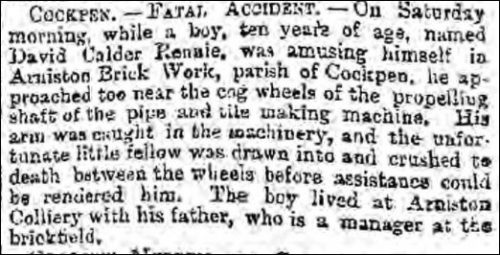 Below – 1892 – Arniston Colliery and possible location of the brickworks as per the ‘kilns’. 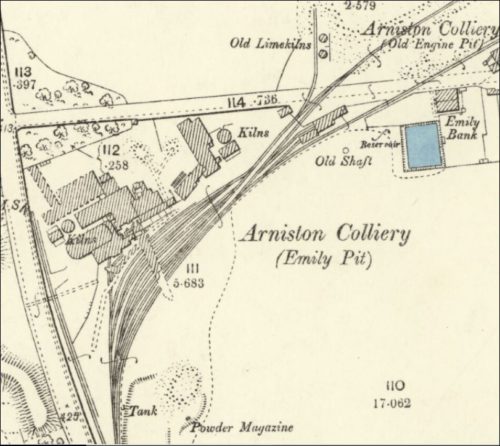 05/08/1895 – Edinburgh Evening News –  A most interesting feature at the Arniston Colliery is the brick and fireclay work run in connection with the mines, in which is used a very large quantity of the waste excavated, chiefly fireclay and shale. The processes of the drain pipe and brick making by hand and by machinery are very interesting.

Below- 1906 – Arniston Colliery and possible location of the brickworks as per the ‘kilns’. 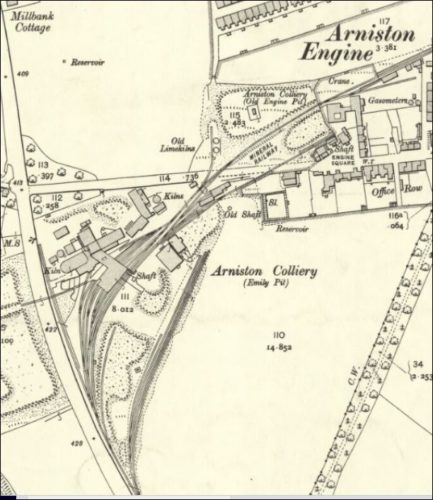