James Waldie and thereafter James Waldie & Sons were originally coal merchants. (Note – SBH – I am as yet unsure of the date whereby they started to manufacture bricks nor exactly where the brickworks were situated. In 1872 they leased the Newbattle Brick and Tile Works but they were also involved in many collieries which had associated brickworks but there is little reference to them being involved directly with brick manufacture apart from Newbattle).

The company of James Waldie & Sons, tile and brick makers were absorbed into the Edinburgh Collieries Company in 1907. 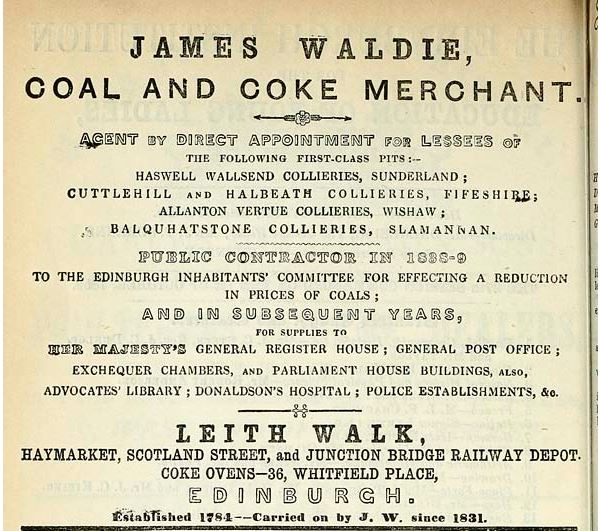 09/06/1910 – Dalkeith Advertiser – Mr James Waldie, of James Waldie & Sons, coalmasters, Edinburgh, met with a serious accident on the railway a short distance from Gorebridge Station last Thursday afternoon. Mr Waldie, who is one of the directors of the Arniston Coal Company, arrived at Gorebridge from Edinburgh with the mid-day train and proceeded with his fellow-director, Mr Nimmo down the railway line towards the pits. In the course of his journey, he was knocked down and run over by an engine, one of his legs being seriously injured. After being medically attended to, the unfortunate gentleman was removed to Edinburgh in all ambulance.

01/01/1916 – The Scotsman – The death took place yesterday of Mr James Waldie, formerly of the firm of Messrs James Waldie & Son, coal owners, at his residence, Macedon, Craiglockhart, Midlothian. He was well known in coal trade circles, and widely respected. Mr Waldie was born in Edinburgh in 1831 and was educated at Kay’s School, Leith and Hill Street Institution, Edinburgh. He was trained in a lawyer’s office in Leith. Later, in 1847, he entered the service of the Edinburgh and Glasgow Railway, goods department and in 1851 he was transferred to the head office in Glasgow. He was appointed goods traffic agent at North Leith in 1854. About three years later he left the railway service and joined his father’s business. He subsequently became senior partner in the firm of James Waldie & Sons, Edinburgh, Leith, and Glasgow, and retired last May, when the business was converted into a limited liability company. Mr Waldie took a considerable interest in public affairs, and in 1871 was elected to Leith Town Council by the ratepayers of the Second Ward. During his service of nearly 21 years in the Council, Mr Waldie on two occasions was unanimously appointed Treasurer of the Burgh, and for two years he was a Magistrate. For 28 years Mr Waldie acted as session clerk of Bonnington United Free Church, and he took an active interest in Sabbath school work. He received a presentation from the congregation in February 1909. He was a J. P. for Midlothian and a director of the Arniston Coal Company. He is survived by a widow, four daughters, and one son. The latter is on service as an officer in one of the Canadian contingents.