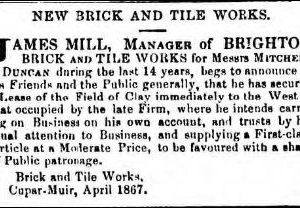 Below – 25/04/1867 – Fife Herald – New brick and tileworks. James Mill Manager of Brighton Brick and Tile Works for Messers Mitchell and Duncan during the last 14 years, begs to announce to his friends and the public generally, that he had secured a lease of the field of clay immediately to the West of that occupied by the late firm, where he intends carrying on business on his own account, and trusts by his usual attention to business, and supplying a first-class article at a moderate price, to be favoured with a share of public patronage. Brick and Tile Works, Cupar-Muir, April 1867. 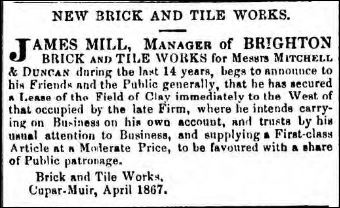 16/05/1867 – Fife Herald – Presentation. On the evening of Saturday last, Mr Thomas Horne, foreman the Leven Brick and Tile Works, was invited his fellow-workmen and a number of friends to meet them in Mr A. Cameron’s, for the purpose of giving him some tangible proof of their regard and esteem for him on the occasion of his going away to fill a similar situation at Cupar Muir Brickworks. Mr David Thomson, after a few brief remarks, in the name of the subscribers, presented Mr Horne with very handsome gold Albert chain. Mr Home, in reply, thanked them kindly for such unexpected and unlooked-for gift, after which, toasts, songs, and recitations followed, and all dispersed a reasonable hour, highly gratified with their evening enjoyment.

03/09/1868 – Fife Herald  – Bricks, tiles, drains and ditch pipes. James Mill begs to thank his friends and the public generally for their kind support since he commenced business, and to intimate that he is now in a  position to supply large or small orders for drain or ditch pipes, common bricks, pavement bricks, roofing tiles, &c ; and anything not generally kept in stock made to order on the shortest notice.  The goods are all manufactured under his own personal superintendence.  The quantity of the goods of his manufacture requires no commendation to those who have already used them, and those who have not need only to give them a trial.  Fire bricks; sewerage pipes, common red clay, chimney cans and fire clay cans, plain and ornamental, also kept in stock; and any article of fire clay manufacture are supplied. All orders punctually attended to. Cupar Muir Tileworks, Cupar.

12/06/1873 – Fife Herald – Reduction the Hours of Labour.— The employe’s of James Mill, Cupar Muir brick and tile works (numbering upwards of fifty hands), waited upon their employer the other day and asked reduction of their working hours from 57 to 51 hours per week, without any reduction of pay. The workmen at Brighton Tileworks (Messrs Duncan & Son) also made like demand, and in both cases, the request was granted.

03/02/1900 – St Andrews Citizen – Painful Accident to a Boy at Cupar- Muir Brick Works. —On Wednesday evening a distressing accident occurred to a lad of 14, Duncan Jamieson, employed at the Fife Brick and Tile Works, Cupar-Muir. By oversight, he stepped into the pit containing the machinery for mixing the clay, and before he could be extricated he was severely injured by the knives. One of his feet was almost severed from the leg, the bone of the leg was broken, and the knee dreadfully lacerated. Several medical men were soon on the spot, and in accordance with their advice, the lad was sent by the 9.21 train to Dundee Infirmary.

14/04/1903 – Dundee Evening Telegraph – Failure of a law firm. It has been announced that Mr G W Bruce, solicitor, is in financial difficulties. He has interests in many businesses including the Fife Brick and Tile Company Limited, Cupar Muir.

27/10/1936 – Edinburgh Gazette – The Companies Act 1929 – The following company has been struck of the register and as such is now dissolved – The Fife Brick and Tile Company.