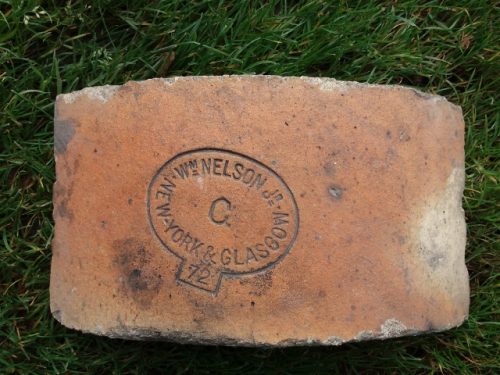 19/02/1870 – (and again 27/05/1871) Below – Real Estate Record and Builder Guide – Advert – William Nelson Jr, Importer and wholesaler in Sewer and Drain Pipe. Office 24 Old Slip: Yard 12th Street and Av D: and North 9th and 4th Streets, Williamsburg. Contractor to Croton Aqueduct Board. (The Croton Aqueduct was the method by which New York City was to be supplied with ‘wholesome water’. ) Croton Aqueduct

Stone-ware pipes were shipped on a vessel, under a bill of lading, excepting dangers of the seas and navigation, but containing no exception of loss by breakage They were in good order when received, were stowed properly and handled carefully in loading and discharging, but some of them came to pieces while being discharged, from the development of cracks existing when the pipes were put on board, or caused while onboard by the perils of the sea, the ship having met with bad weather. The consignee tendered the freight on the sound pipes delivered, which was refused, and freight was demanded on the whole, at the rate per ton specified in the bill of loading, and a libel was filed against the goods, to recover the freight Held, that, as the goods were properly stowed with reference to their character and their apparent condition, the vessel was not liable for the breakage, and was entitled to retain all the goods till the full freight was paid

E. Seymour, for the claimant.

The goods, after being libelled, were bonded in this suit and delivered to the claimant. It is to be noted, that the answer sets up no recoupment or any damage to or breakage of the goods, and that the bill of lading contains no exception as to loss by breakage, other than such as may be covered by the exception as to the dangers of the seas and navigation. The goods in question were stone-ware pipes and rings of a brittle character, transported loose, and not in boxes or packages, or otherwise protected.

The evidence satisfactorily shows, that the goods were properly stowed; that the vessel met with bad weather on her passage; that the goods were in apparent good order when put on board; that such goods are liable, through transportation in ships at sea, to come out of the vessel broken, through the development of cracks which, in fact, existed in them when put on board, but would not attract notice; that some of the goods, in this case, came to pieces, when handled in the hold of the vessel, for the purpose of being discharged; that the broken pieces, as well as the unbroken goods, were discharged on the wharf; that the goods were handled properly and with care, in being loaded and discharged; and that none were broken through carelessness in discharging them, although some came to pieces while being moved from the vessel or the wharf to a place of deposit, through the development, as seems probable, either of cracks existing when they were put on board of the vessel, or of cracks caused on board by the perils of the sea. Although there was not in the bill of lading any exception of loss by breakage, yet the vessel is not liable for losses caused by inherent defects in the goods, or by their brittle nature, provided they were in apparent good order when put on board, and were properly stowed with reference to their character and their apparent condition. That was the ease here; and, in such case, the consignee must bear the loss, as well as pay the freight, not only on the goods delivered in an unbroken condition but on all put on board under the bill of lading. Clark v. Barnwell, 12 How. [53 U. S.] 272, 282, 283.

[There must be an order joining the executors of Dunham, who has died since this suit was commenced, as co-libelants with Carey in the place and stead of Dunham.

There must be a decree for the libellants, with costs, for the amount of the freight, computed in the manner prescribed by the bill of lading, namely, £128. 18s. 8d, sterling, converted into United States currency at bankers’ rate of exchange on London in New York, at the date of the entry of the vessel at the custom-house at New York, on her arrival at New York, on the voyage in question. The amount will be ascertained by a commissioner, on a reference. [Upon an appeal to the circuit court, this decree was reversed. Case No. 10,536.]