Below – 1858 – Viewhill Brickworks near Muirmadzean. The works appear disused by 1897. 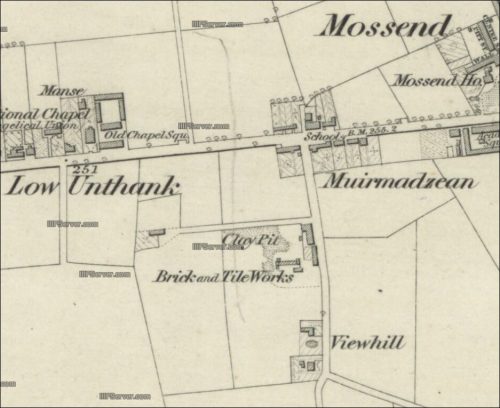 28/10/1871 – Hamilton Advertiser – Smoke case. Kerr v Smellie – Robert Kerr, farmer Mossend, brought an action against Gavin Smellie, brickmaker, Viewhill, for the sum of £3 in name of damage to a crop of beans on the pursuers farm, caused by smoke carelessly and negligently emitted from a brickwork at Muirmadzean belonging to the defender during the months of June, July and August last. It was brought out in the statement for the pursuer that the crop was considered a very good one, except for the portion of it near the defender’s premises, which was not up to the general average. One witness who had seen the beans after they were cut estimated the loss at £3.   The defender adduced a number of experienced agriculturists to prove that they were in occupation of land in close proximity to brickworks and that they, in consequence, suffered no damage. Professor Moffat, Glasgow who was also called as a witness stated he had visited the premises and he gave it as his opinion that no injury could be done to the bean crop in question in consequence of the smoke complained of, especially as the quantity of sulphuric acid emitted from the defender’s furnace must be excessively small. The Sheriff dismissed the action.