(Note – SBH – The brickworks situated in the Nethercommon area of Paisley are often difficult to separate when trying to ascertain which piece of researched information should be allocated to which brickworks. The same goes for conclusively determining which location on the old OS maps refers to which brickworks. If anyone notices any error or has any relevant suggestions then please get in touch. The brickworks concerned are Shortroods Brickworks, Gockston Brickworks, Galts Nethercommon Brickworks, North Caledonia Brickworks, Caledonia Fireclay Works and the Caledonian Brick and Drain Tile Works).

Below – 22/10/1864 – Huge chimney built for Mr Patrick Comyn McGregor at the Lonend Dye Works, Renfrewshire. William Pollock was the builder. Approximately 500,000 bricks were used. It is uncertain if Pollock used his own bricks or not or indeed if he was even manufacturing bricks at this time. 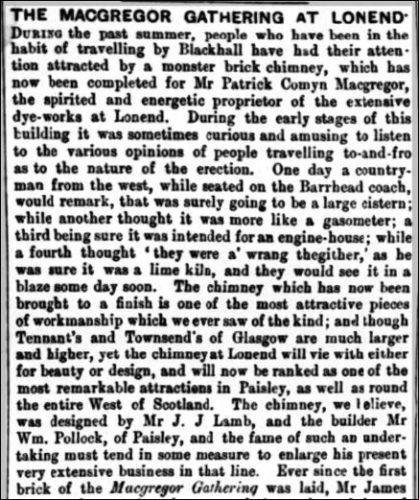 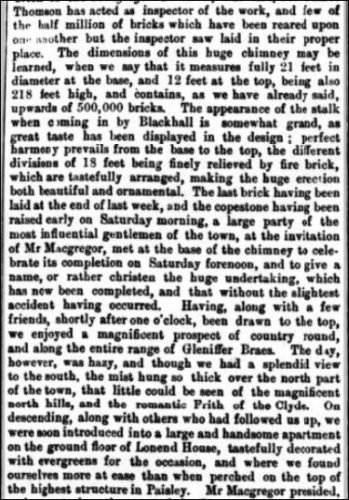 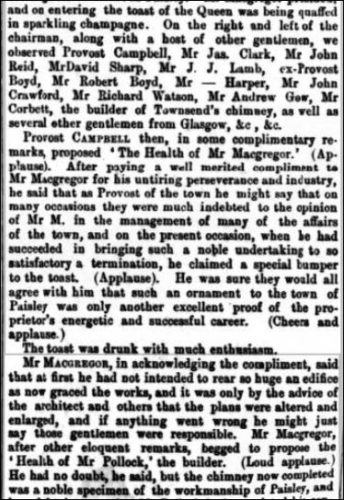 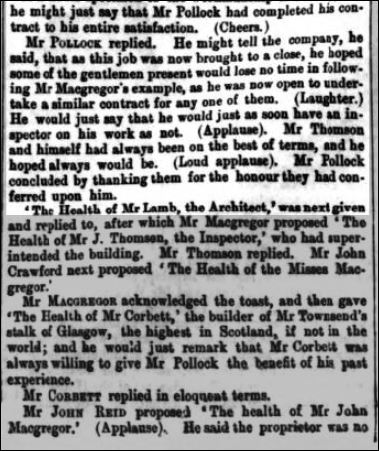 15/07/1865 – Paisley Herald – Valuable clay field near Paisley for sale by a private bargain. That piece of ground at Nethercommon, Paisley presently occupied by Mrs Hill as a market garden, with the cottage thereon, is now for sale, by a private bargain. The ground extends to 3 1/2 acres, imperial, or thereby, and a bed of clay, of upwards of 10 feet in depth, has been proved to exist in it. A more desirable field for the manufacture of bricks, tiles, &c., is seldom to be met with. The present rental is £25 per annum. The two tenements of dwelling houses with gardens adjoining, situated to the South of the above, one steading intervening, are also for sale. Rental £20 … (Note – SBH – I am uncertain which, if any brickworks was thereafter built on this land but I have detailed it here to ensure the information is recorded).

12/02/1870 – Paisley Herald and Renfrewshire Advertiser – Valuable Estate near Paisley for Sale – There will be sold by public roup within the George Hotel, Paisley on 03/03/1870. The lands of Gockston containing 34 1/2 acres imperial and situated in the Burgh of Paisley between the Greenock and Inchinnan Roads within 1 mile of the cross … It contains a valuable seam of clay similar to that wrought in the Lands of Shortroods adjoining and ready access to good roads and the proximity of the branch railway recently constructed offer unusual facilities for brick and tile making on an extensive scale. In addition, the property is supposed to contain ironstone, fireclay and other minerals. The lands are at present laid down in grass for which there is a great demand and there is a suitable dwelling house, garden and farm offices attached. The feu duty is only 14s 4d annually and there are no casualties of superiority. To induce the competition the upset price has been fixed at £7000. (13/05/1870 – Glasgow Herald – … Upset price reduced to £4500).

03/04/1874 – Glasgow Herald – Sale of brickwork and plant. Yesterday, Mr R Paterson, auctioneer, exposed for sale in the County Hotel the Gockston brickfields near the Greenock and Inchinnan Roads together with the whole working plant and utensils which are in operation. The land extends to 3 1/2 acres imperial measurement and it is stated that very little of the clay has been wrought. The plant including a brickmaking machine, engine, boiler, cutting table etc and the upset price was £1605. After considerable competition, the works and plant etc were purchased by Messers R Brown & Son for £2165.

22/11/1881 – Greenock Advertiser- A storm in Paisley – A considerable portion of the stalk vent at Gockston Brickworks was blown down.

30/05/1885 – Paisley and Renfrewshire Gazette – Robert Hillcoat, brickmaker, West Gockstone, was charged with (1) employing a girl named Jane Barr in his brickfield, she being under sixteen years of age, and (2) with employing a boy in his brickworks without a medical certificate of fitness. An agent appeared for Mr Hillcoat, and on his behalf admitted the offence. Mr Maitland stated that the Government were very particular about enforcing the section of the Act which prohibits the employment in brick making of girls under sixteen years of age, as it was found to be injurious to them morally as well as physically. He asked for a substantial penalty in the case of Jane Barr but did not press so heavily in the case of the boy. The Sheriff remarked on the wisdom of the clause which prohibited the employment of young girls in such an occupation as brickmaking and inflicted penalties amounting to £4 3s. 6d., including costs. John Barr, baker, Wallneuk-street, was charged with conniving at the illegal employment of his child Jane Barr in Robert Hillcoat’a brickworks. Barr did not appear personally, and the Sheriff granted a warrant for his apprehension.

Below – 1895 – This map appears to show the following brickworks but it is not certain – can anyone confirm?) 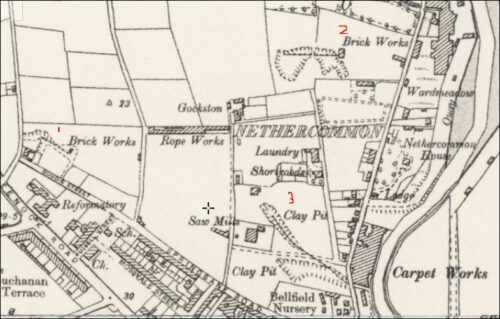