Govan Forge and Steel Limited appear to have also made their own bricks or had bricks made elsewhere and stamped with their Company name. 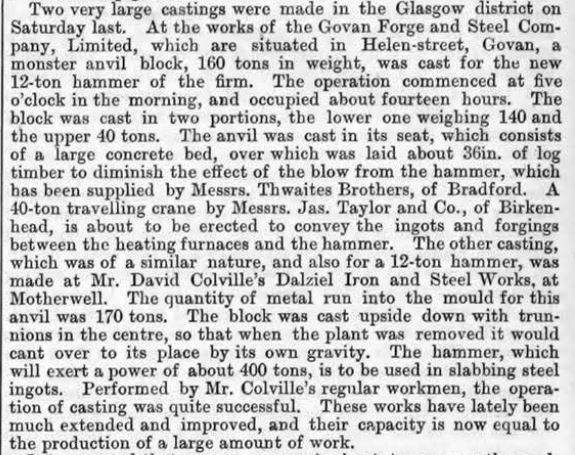 29/02/1884 – Glasgow Evening Post – A meeting of shareholders of the Govan Forge and Steel Company Limited unanimously resolved that the company should be wound up voluntarily and Mr J. Wyllie Guild, C.A. was appointed as liquidator.

04/04/1884 – Glasgow Herald – Forge and Steel Works in Govan for sale. These valuable and extensive works situated between Helen Street and the railway at Govan, belonging to the Govan Forge and Steel Company Limited are now in liquidation … There are about 1 1/3 acres at the south end of the works being used as a brickworks but which can be feued. The total feu duty is £730 17s 6d per annum. The works are being carried on in the liquidation …

11/09/1884 – Glasgow Herald – Govan Forge – Mr Wyllie Guild, the liquidator of the Govan Forge and Steel Company appealed against the valuation of £1580 put upon the forge and buildings and £50 on an adjoining brickfield. The works were standing idle and the brickfield had been closed for several weeks. The works with tools and stores were exposed for sale last month at £25,000 and failed to find a purchaser. He claimed the valuation should be reduced to one half the sum fixed upon by the assessor. The assessor said that admitting the works to be worth £25,000, his valuation, was if anything, under the mark. Mr Guild said that even admitting that the works were likely to be set a-going, the valuation was too high. The appeal dismissed. Mr Guild found this oppressive but submitted.

Below – 27/01/1887 – The Scotsman – Govan Forge and Steel Works with ground adjoining for sale. It is situated between Helen Street and the Glasgow and Paisley Joint Railway at Govan near Glasgow … the remainder of the property extending upwards of 1 1/2 acres has been occupied as a brickfield and from its situation, is well adapted for either dwelling houses or manufacturing or other public works. 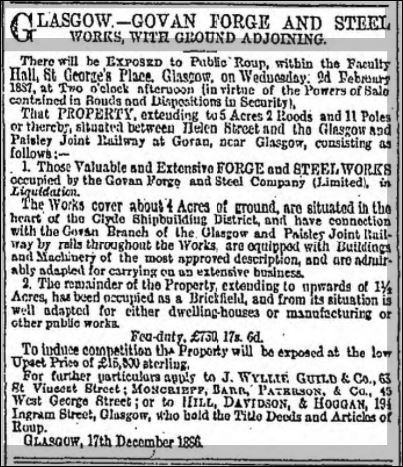 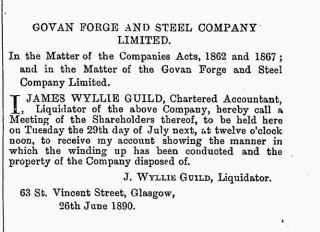