18/04/1899 – Dundee Advertiser – Terra Cotta Clay – This is found over the whole extent of Newhouse within 1 foot of the surface. It varies in thickness from 5 feet to 40 feet. The quantity is thus simply enormous. It has been tested and found to be of first-class quality. Mr James Dunnachie, Managing Director, of the Glenboig Union Fire Clay Company Limited, is of the opinion that the samples of goods manufactured from the clay are “superior to any article of the kind hitherto made in Scotland, both as to closeness of texture and richness of colour” and he adds”if you have a large deposit of this material easily got at, it should prove very profitable as the demand for terracotta goods of high quality and of the right colour is rapidly increasing”

Fire Clay – There are several seams of this material usually in connection with coal seams, but some are found without coal. Several of these have been found very suitable for the manufacture of enamelled goods, glazed pipes etc, being almost entirely free from iron. Some waggon loads have been tested by the Glenboig Union Fire Clay Company Limited at their works and found highly suitable for both glazed goods and brick making. They have also been tested and found to take on a beautiful enamel. Clay for enamelling is very scarce and valuable. Mr James Dunnachie’s opinion of this fire clay is as follows. “Some time ago I received through you from the Millheugh property,2 trucks of fire clay which I had manufactured into bricks and sanitary pipes. The burning was effected in the kilns along with the Glenboig goods at high temperatures. The salt glaze on the pipes was bright and clear and being hard burned, both the body of the pipe and the glaze would be of the most enduring kind. The clay was peculiarly free from iron spots and would, in consequence, be well suited for the manufacture of all descriptions of enamelled goods”

Ganister – In connection with some of the fire clay seams there are found quantities of ganister, an article in great demand for steelworks etc and the working of this is expected to prove a source of revenue to the Company.

Mr Robert Dougall, Fire Clay Manufacturer, Bonnybridge has also tested both the terracotta clay and fire clay. The following extract is from his report, which is applicable to the whole of Newhouse and indicates his opinion ” There are 5 seams of fire clay on the northern portion of the property, 4 of those being found in connection with coal seams. This clay is almost free from iron and especially suitable for the manufacture of white enamelled ware, pipes and sanitary ware generally. I estimate that there are about 1,600,000 tons of this clay available for working.

Over the whole property and within 182 of the surface, there is found a large deposit of fine clay. The clay burns a very fine colour and takes a very sharp impression and is suitable for the manufacture of fine facing bricks and tiles and all kinds of goods for which terra cotta is usually employed. I estimate that there are between 7 and 8 million tons of this clay on the property which, being so near the surface, can be very cheaply won. As there is a deep gully on the west of the property considerably below the bottom of this clay deposit, it can be wrought out without pumping water.

The property contains coal suitable for manufacturing purposes and is otherwise well suited for an economical manufacture of all kinds of clay goods for which its railway connection with Glasgow and surrounding towns give it a ready market. There is a great and ever increasing demand for such goods at remunerative prices. Altogether I have seldom seen any property so well situated for economical manufacture and sale of its products. 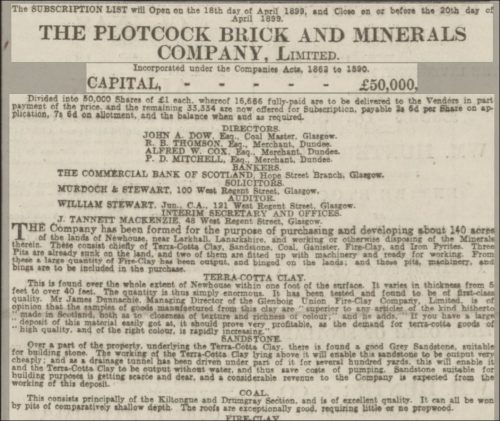 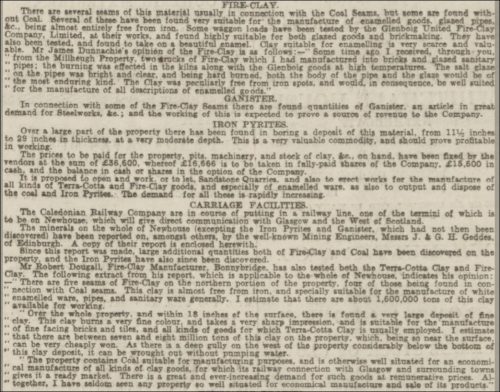 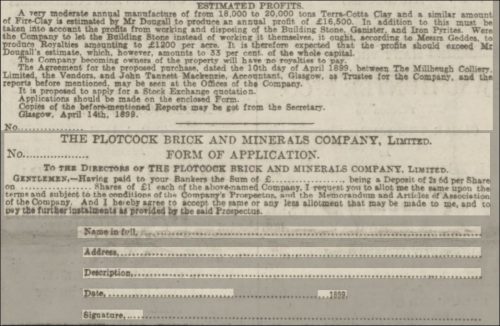