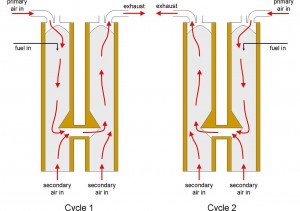 During the last twenty years or so, and more especially since the Bessemer and Siemens processes of making steel came to be established as great manufacturing industries at home and abroad, the district of Glenboig, near Coatbridge, has acquired a great reputation for the character of the bricks and other goods from the millstone grit fine clay which has been so beautifully deposited in that particular portion of the Lanarkshire coalfield. For furnace construction, there is nothing to surpass a genuine Glenboig brick in respect of its fire resisting power, unless it is that peculiar product of south Wales manufacture known as the Dinas fire brick, which, however, is almost exclusively composed of silica and has but a limited range, of practical application. When some important improvements in burning fire bricks are completed it may confidently be expected that Glenboig manufacturers will rise still higher in reputation. Occasionally in recent years some of the manufacturers of fire bricks of this country have considered it desirable to adopt the heat regenerative system to the burning of such goods, but in no attempt that has been made, so far as we are aware, has any marked economical result been attained until within the last two or three weeks. The special case to which we are about to refer is that of Mr James Dunnachie, of the Glenboig Star Fire Brick Works, where there are manufactured goods of such remarkably refractory power as to be in, great demand for furnace construction. Having a raw material of such splendid utility as a fire-resisting medium, it was but natural that the gentleman whom we have named should exert every endeavour to turn it to the best possible account, both in the preparing and moulding stages of the manufacture and in the economical and perfect firing of the bricks after being prepared.

Having lately inspected the new firing arrangements at the Star Fire Brick Works, we give a brief sketch of the modus operandi pursued by Mr Duunachie and we would just remark in passing that the arrangements in question, which have long been worked out, were first brought into practical use in connection with the adoption of the Wilson, producer to supply the requisite gaseous fuel. It is not necessary that we should here describe that useful and valuable invention, but it is proper to state that this is the first occasion for it to be employed, in the successful burning of fire bricks. As at present developed, the arrangement adopted is a kiln consisting of two parallel stacks of brickwork, about 24 feet apart, and each containing five separate chambers, in each of which from 13,000 to 14,000 bricks can be fired at one “heat.” In order that the kiln may be capable of continuous regenerative firing the two sets of chambers are connected with each other at the two ends by means of underground flues, and in this way the ten chambers may be regarded as one continuous series – that number being required for completely carrying out the ideas of the inventor. The space between the two parallel stacks of brickwork is covered in by means of an iron roof, so that the operations of charging the green bricks and discharging the finished goods may be pursued in all kinds of weather. ‘There are, however, doors at both ends of the chambers. At the west end of the space just referred to there are erected two of Wilson’s gas producers of large proportions, for which the gaseous fuel is lead to the underground flues for working the separate chambers when charged with bricks to be fired. One great advantage of this system of heat regeneration in burning fire brick is that there is always a regenerator chamber in readiness for heating the air requisite for the combustion of the gaseous fuel. Of course, in commencing the process at the Star Fire Brick Works it was necessary to fire the first chamber in the usual way by means of specially erected coal furnaces, but as soon as it was fired off it was ready to become part of the future plan as the first regenerator chamber. At the time of our visit, the system was in successful operation with one set of five chambers, and the stack of brickwork containing the other five was in rapid progress. ‘The experience with the gas-fired kilns up to the present is that the firing operation can be thoroughly performed in from 1 to 24 hours, whereas in the best type of kilns used at the same works, employing coal as the fuel, the burning usually occupies from four to six 12-hour shifts. It is not considered a too sanguine expectation to suppose that, if desired, the time required for burning off a kiln chamber under the new order of things may eventually be reduced even to 12 hours.

There is no necessity, at this early stage of Mr Dunnachie’s operations, for giving any detailed account of the structure of his new kiln, and we, therefore, limit our remarks to a brief notice of the mode of employing the gas and air – the fuel and the supporter of combustion. Assuming, then, that No.1 chamber has been fired off, and that the effluent gases produced in the combustive process have passed through chamber No. 2, which is the next in the series, the contents of the latter are now in all probability at a bright red heat – the gas from the producers at a temperature of from 600 degs to 800 degs Fahrenheit – is turned on direct to No. 2. and so likewise is the highly heated air that is streaming through No. 1 – the regenerator chamber. These two currents are allowed to mix in the furnaces or burners beneath the floor of the chamber, and a magnificent glowing effect is soon evident. The underground flues are provided with valves that can be brought into action at a moment’s notice for turning on or turning off the gaseous current and regulating it according to the condition of the mass of bricks being operated on at the time. These valves are worked in the covered space formerly referred to, and at what may be termed the working front of the kiln. The quantity of air that passes from the regenerator chamber is regulated by means of dampers, which are also under the most complete control. At the end of from 18 to 24 hours, the firing is completed, and the particular chamber that has just been burned off becomes, in its turn, the regenerator for the next in the series, which by this time has doubtless already attained to a full red heat through the action of the heat of the effluent gases, but which heat is economised in the manner indicated. And in this way, the new system of using gaseous fuel in the fire brick manufacture may be fitly spoken of as one of continuous heat regeneration. The economy already attained as regards fuel is very significant, the saving of which is upwards of 60 per cent and there is every reason to expect that it will yet reach 75 per cent when the other five-chambers are brought into use. Besides the economy in fuel just stated, and the speed in burning, the special features of the new system of firing that have been aimed at and attained are the use of gaseous fuel, combined with the perfect diffusion of the heating current. Owing to the manner in which the gas and air flues are arranged in each chamber the most absolute perfection is attained in the admixture of the gas and hot air for the burning process before they are admitted into the kiln chamber proper. It is also worthy of mention that, if the front of the kiln should become too hot, cold air can be admitted at pleasure, and that it is possible to take off the effluent gases from any one chamber either at the top or bottom. Furthermore, the heat current may be conveyed directly to the next chamber in the series, so that there is practically no waste of heat at any stage of the process. From all the various circumstances which we have mentioned, we may (using the remark of a competing manufacturer of fire bricks) characterise Mr Dunnachie’s new system of burning bricks as being a revolution in the manufacture. So for as can be seen at present, there in abundant reason to believe that the same system of using gaseous fuel in continuous regenerative firing may be adopted with an equally marked economy in the manufacture of pottery ware and in other more or less similar industrial processes. 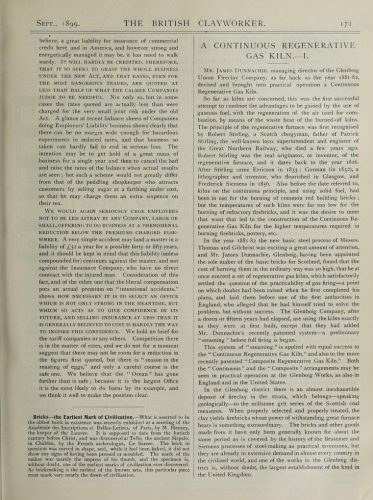 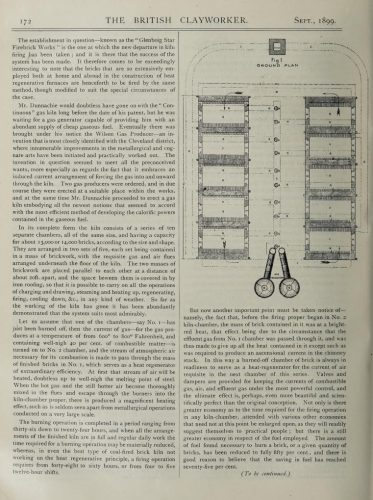 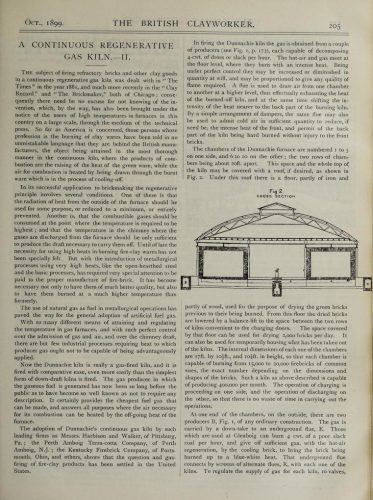 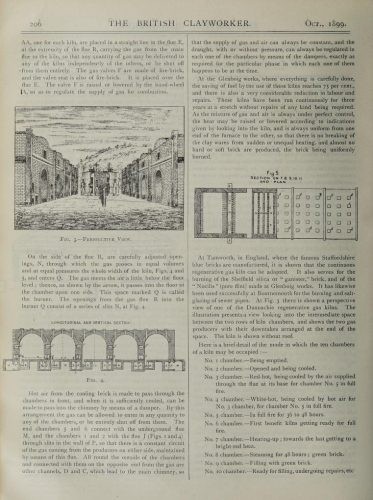