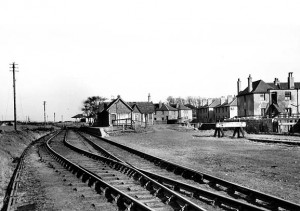 Roslin Colliery & Brick Works, Midlothian Shotts Iron Company Ltd started Roslin Brick Works in the 1930s and operated the business until 1947 when the National Coal Board took over. The Scottish Brick Corporation became the owners in 1969 and ran the business until its closure on 31 December 1977. 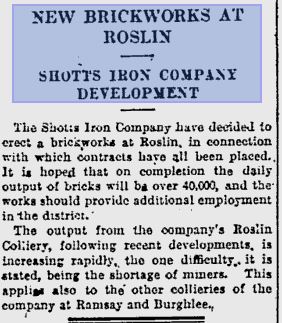 18/12/1937 – The Scotsman – Shotts Iron Company Limited … from the furnaces there is of course, also a large production of slag, much of which is now made into slag bricks and the balance is treated for road purposes. In addition to these slag bricks, the company has in operation at Shotts a composition brick making plant which has been producing 12 million bricks per annum. These bricks have a ready outlet in the existing building demand. A new brickwork has been erected at Roslin Colliery and is now in operation. These new bricks are of first-rate quality and are commanding a ready market. It is the company’s intention to double the productive capacity before next June …

1943 – A short history of the Shotts Iron Company Limited by Augustus Muir … During the early part of the war, the brickworks both at Roslin and Northfield were kept busy. The
demand was mainly for the building of new factories, defences, air-raid shelters and other emergency work, but in the middle of 1942 orders were falling off. By the end of that year, when brickworks were closing down all over the country, it was realised that the Company’s entire brickmaking plant would soon be out of action. On 2nd July 1943, the Roslin works were closed, with over 1,500,000 bricks lying unsold, and the Northfield works were shut down in September of that year. Both remained under care and maintenance for the duration of the War … (P56).

1947 – 1969 – The 1985 publication ‘A survey of Scottish brickmarks’ suggests that the National Coal Board operated the works during this period. 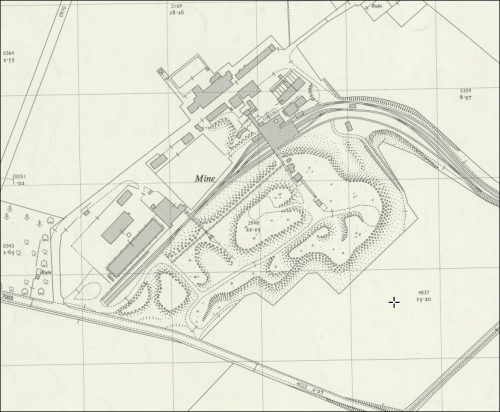 1969 – 1970s – The 1985 publication ‘A survey of Scottish brickmarks’ suggests that the Scottish Brick Corporation operated the works during this period.