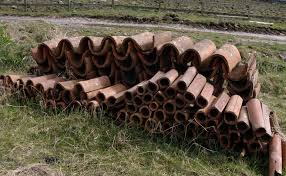 1823 – James Smith – (3 January 1789, Glasgow–10 June 1850, Kingencleuch near Mauchline, age 61) was a Scottish inventor whose inventions include a reaping machine, a subsoil plough and the first endless chain of flats for carding. Smith’s father, a self-made Glasgow businessman, died when he was two months old; his mother went to live with her brother, a friend and pupil of Richard Arkwright, and managing partner of cotton-works at Deanston. Smith attended Glasgow University before entering his uncle’s factory and becoming manager aged 18. Aged 24, his invention of a reaping machine won him a medal from the Imperial Agricultural Society of St Petersburgh. In 1823 Smith came into possession of his uncle’s farm and set about systematically draining the soil and working it with a subsoil plough. In 1831 he published his agricultural recommendations as a small pamphlet, Thorough Draining and Deep Working, which attracted attention in the agricultural crisis of 1834.

Smith also introduced mechanical innovations in spinning: in 1834 he improved Archibald Buchanan’s self-striping card, filing a patent (British patent no. 6560) for fixing the flat cards on an endless chain, allowing them to be regularly cleaned.

Smith was appointed by Robert Peel to the Commission into the sanitation and health of manufacturing towns, which led to the 1848 Public Health Act: Smith pressed to make liquid manure useful to agriculture. Smith was also an active member of the Royal Agricultural Improvement Society of Ireland, and a member of the Glasgow Philosophical Society, contributing papers to their Transactions.

08/06/1843 – Perthshire Advertiser – Inchture – Lord Kinnaird has introduced into the Carse of Gowrie those celebrated drain ploughs that are so famous in the neighbourhood of Stirling, for the expeditious and most efficient manner in which they perform the work assigned to them. It was generally understood by most of the people in the district, that his Lordship intended to commence operations on Wednesday last week on the farm of Newmains of Inchture and such a keen and lively interest was taken by every person here, that, notwithstanding the very rainy day, there were four or five hundred people who witnessed the operations. Almost the whole of the farmers in the neighbourhood attended and a great many of the landed proprietors in this quarter and also from a distance, were present, amongst whom we noticed, besides Lord Kinnaird, Sir Patrick Murray Threipland, Bart. Sir John Ogilvy Bart &c and a great many more distinguished individuals. The operations were conducted by the imminent inventor of the plough, Mr Alexander from Stirling and he was most ably assisted by Mr McNab, and some other gentlemen from the same quarter; and they are certainly entitled to great credit for the very business-like manner in which they managed the performance of the work. The ploughs are each drawn by twelve horses, and when the ground is gone over with one, the horses are then attached to the other. The length of the furrows was nearly two hundred yards and they were gone over in about six minutes. The furrow is twice gone over. The second plough is narrower than the other, on purpose to take out the bottom of the drain to the size of the tile and thus when finished the drain presents one uniform and most beautiful appearance, and is at once ready for the laying of the tile, or a concrete drain may be immediately formed in it, as was most expeditiously shown how to done by Lord Kinnaird himself, who very dexterously performed the manipulations with his own hands, and showed how it was performed in either the two ways that he practises his own home farm. In the one, the concrete is formed in the shape of an inverted tile or turned upside down, and a common sole used for tile is then placed over the concrete, which forms at once a very cheap and durable drain. In the other method, his Lordship formed a concrete sole in the bottom of the drain, and then the common drain tile was put in above, and this forms most a perfect and permanent drain. His Lordship takes very active part in all these most useful operations and enters with great zeal and spirit into all the manipulations connected with the work going on. And his tenantry cannot but award him their grateful acknowledgements, as his Lordship has procured the drain ploughs almost entirely for their use; and has also this season established a tile-work his estate, where tile is to supplied considerably cheaper than they could hitherto be procured. 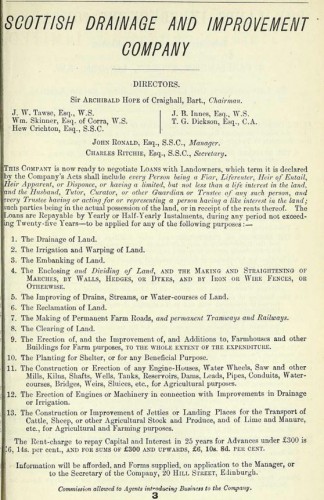 This Company is now ready to negotiate Loans with Landowners, which term it is declared by the Company’s Acts shall include every Person being a Fiar, Life renter, Heir of Entail, Heir Apparent, or Disponee, or having a limited, but not less than a life interest in the land, and the Husband, Tutor, Curator, or other Guardian or Trustee of any such person, and ■very Trustee having or acting for or representing a person having a like interest in the land; such parties being in the actual possession of the land, or in receipt of the rents thereof. The Loans are Repayable by Yearly or Half-Yearly Instalments, during any period not exceeding Twenty-five Years — to be applied for any of the following purposes : —

1. The Drainage of Land.

2. The Irrigation and Warping of Land.

4. The Enclosing and Dividing of Land, AND the Making and Straightening of Marches, by Walls, Hedges, or Dykes, and by Iron or Wire Fences, or Otherwise.

5. The Improving of Drains, Streams, or Water-courses of Land.

6. The Reclamation of Land.

7. The Making of Permanent Farm Roads, and permanent Tramways and Railways.

8. The Clearing of Land.

9. The Erection of, and the Improvement of, and Additions to, Farmhouses and other Buildings for Farm purposes, to the whole extent of the expenditure.

10. The Planting for Shelter, or for any Beneficial Purpose.

12. The Erection of Engines or Machinery in connection with Improvements in Drainage or Irrigation.

13. The Construction or Improvement of Jetties or Landing Places for the Transport of Cattle, Sheep, or other Agricultural Stock and Produce, and of Lime and Manure, etc. , for Agricultural and Farming purposes.

Information will be afforded, and forms supplied, on application to the manager, or to the secretary of the company, 20 Hill Street, Edinburgh. The commission allowed to agents introducing business to the company.

Below – 1889 – Scottish Drainage and Improvement Co. 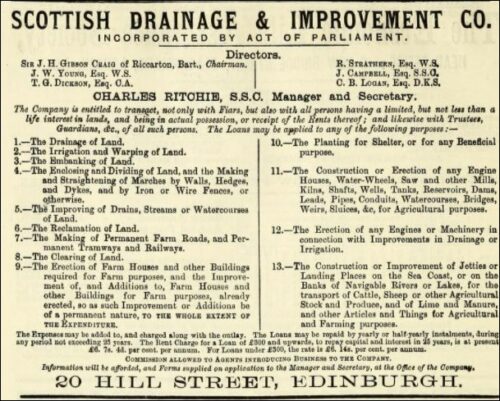 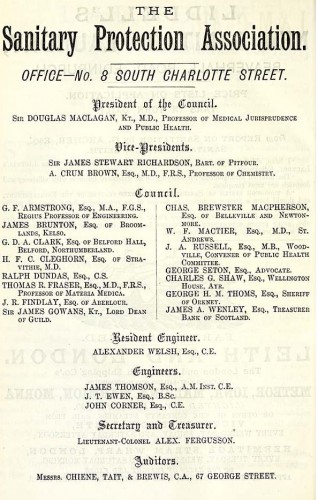 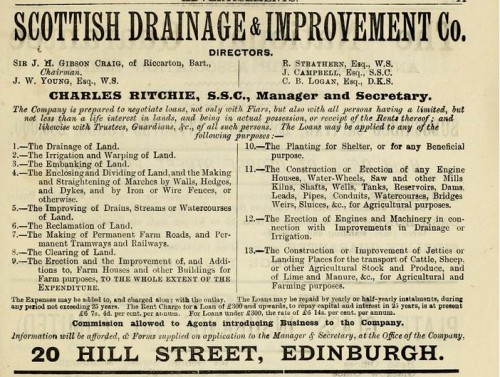 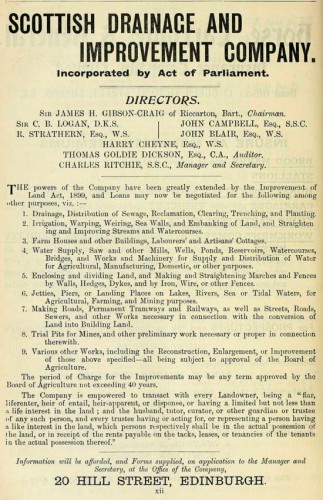 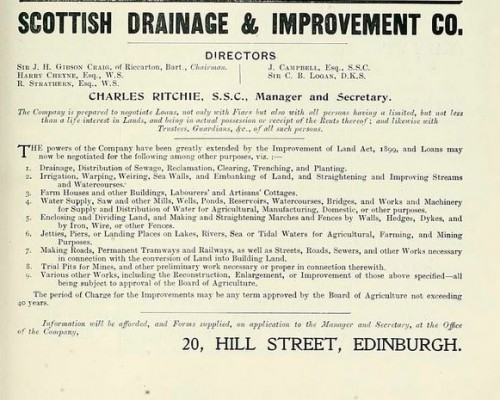 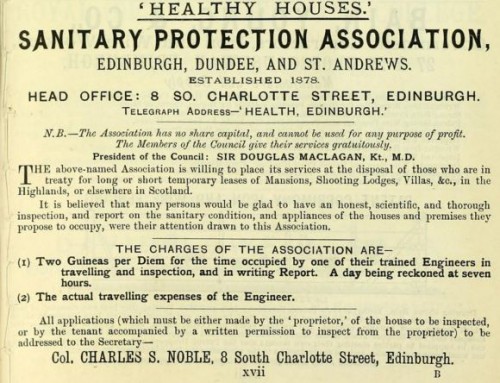 Field draining in Tiree – From the 1840s fired clay drain-tiles were being manufactured on the mainland and these were being used on Tiree by the end of the 19th century. Where the tiles joined they put a handful of threshed straw over the pipes to stop the earth falling through the cracks and blocking them. These drains lasted about 50 years.