Below – 25/11/1841 – Fife Herald – Article on tile draining in Ayrshire. Old drainage ‘tubes’ were manufactured at the Drongan Pottery.

From an article entitled ” Statistics of Tile Draining,” published in the Ayr Observer, we select the following facts and inferences, which, for brevity’s sake, are thrown into our own language. So far back as 1793, Colonel Fullarton paid much attention to draining, and in his ” General View of the Agriculture of Ayrshire,” describes accurately the methods then in use. Stone drains, fifty years ago, cost from L.3 to L.5 per acre, and tenacious soils were liable to so many accidents, that the practice, after a time, fell into general desuetude. But second and simpler method described. Thick sods were cut and laid aside, and then trenches scooped deep enough to resist the effects of circumambient furrowing. A narrower spade was then used, and smaller trenches formed at the bottom, with shoulders or epaulments of a few inches on each side. After removing the earth, the top sods were reversed, and resting on the shoulders just mentioned, left a limited space empty for water tables subterranean. The drains were then filled level with the surface; and the patriotic Colonel honestly confesses that ” neat as this method may for dressing pleasure grounds and parks, it found inadequate for the great purposes of drainage on an extensive scale” But even then, unknown to the author quoted, tile tubes, or barrels of a certain bore, had been tried on the estate of Auchencruivc. Some of these tubes, which were made at the Drongan pottery seventy years ago, were dug up in the pleasure grounds last season and exhibited in the Ayr market, where they attracted much attention. On the estate of Cavens, in our own neighbourhood, several fields were furrow-drained about the same time, sewered, and closed, upon a different principle. A slate was placed at the bottom the furrow, abutting two bricks edge, about four inches apart, and parallel to each other; on the top, another slate was placed, as roofing to the slender superstructure below, and the operation finished by replacing the earth previously taken out. And, simple this process may appear, the object in view was well attained that the Cavens drains are described in the article before us as running passing well at the present day. So wedded, however, are the great bulk of mankind to use and won’t, and suspicious of ” new come changes,” that scarcely single individual followed the example of the then proprietor of most extensive estates in Ayrshire and Galloway. But a new era as regards draining dawned Ayrshire about fifteen years ago, under the high auspices of the Duke of Portland. Still, even then, with the schoolmaster more abundantly abroad, increased capital, enterprise, education, the mass of ruralists objected to the durability of tiles, and altogether looked so coldly on, that, over the Duke’s vast estates, not more than two, out of a numerous array of farmers, embraced willingly the improvement recommended. Still his Grace, in putting his hand emphatically to the plough, is not of those who pause to look back; and, such are the virtues that wait on perseverance in a good cause, that there .are at present in the county of Ayr alone fifty-four tile-works active operation. The names, proprietory, and locality of these, are all given in the article we quote from, in connection with the following interesting particulars:— ” The above works will produce on an average thirty millions of tiles yearly, quantity capable of draining not less than 12,396 imperial acres, allowing distance of eighteen feet between the drains. The number of acres in Ayrshire is 793,600, and suppose one-fourth to incapable of amelioration, there will still remain 595,200 of improvable land. At the present year’s rate tile-making—taking it for granted that the whole have been used, and deducting 150 millions the manufacture of previous years—it would require nearly forty-three years to complete the drainage of the county. The selling price of thirty millions of tiles, at 30s. per thousand, would be L.45,000. The quantity of coal consumed will be about 15,000 tons; and the number of men and boys employed in making them not less than 1,200. Thirty millions of tiles, one foot in length, will lay 1,621,621! falls of drains, 18-5 feet to the fall, or nearly 6,000 miles. Supposing the average cost of cutting, laying, and filling the drains to 4d. per fall, the total would amount to L.27,027; and, calculating a labourer’s wage at 10s. per week, for sixteen weeks in the year, the usual period of draining in this country, it follows that employment is given to 3,378 men—a matter of no small moment, especially a season when other out-door labour is generally scarce. Granting that 150,000,000 of tiles have been laid prior to this date, 61,980 imperial acres will necessarily have been drained. Take the produce, before subjected to this process, at six bolls, and now at ten per acre—a medium average—the increase, over former years, will be 247,920 bolls, or 123,960 quarters. Carrying the calculation little farther: suppose that equal enterprise is displayed during the next ten years—and there every probability that it will far exceed it— the stimulus was given to the productive capabilities of the soil will be still more strikingly apparent. Ten years draining at 12,396 acres yearly, will give a total of 123,930, or an increase, at the previous average, of 247,920 qrs. of grain. Thus showing an augmentation the means of existence of 60 per cent.”—Dumfries Courier. 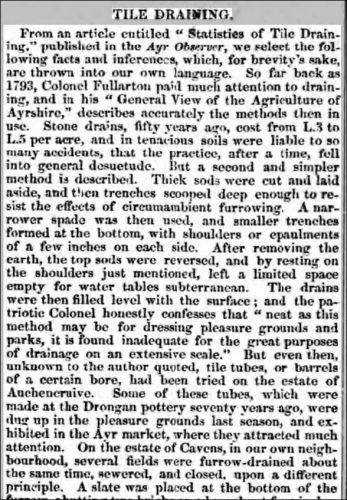 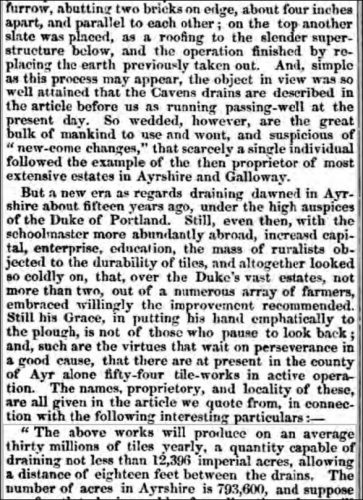 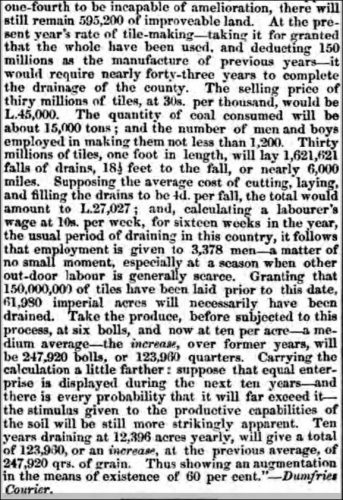