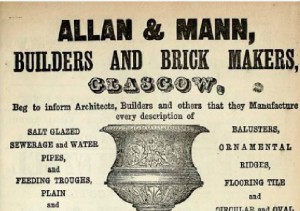 1837 – The 1985 publication ‘A survey of Scottish brickmarks’ suggests that Allan and Mann were operating the works from 1837.

18/10/1845 – The Scotsman – Fatal accident. About four o’clock on Thursday morning a stranger met his death at the brick kilns of Messrs Allan & Mann situated at Port Eglinton, Gorbals, Glasgow. He had gone in to warm himself when a large quantity of bricks suddenly gave way and he was buried under the mass. Every exertion was made by the workmen to extricate the unfortunate man but by the time the body was recovered, life was extinct. The affection of the stranger’s dog was touchingly manifested in using every effort to aid the workmen to uncover the body of its unfortunate master and it could only be removed from the spot by force. The deceased was apparently about 25 years of age was decently dressed in moleskin clothes and had 9s 9d in his pockets. . He is believed to have been a carter who had arrived from Edinburgh by one of the canal boats on his way to be employed near Barrhead. The body was brought to the Gorbals Police Office where it lies unclaimed.

Below – 20/09/1847 – Glasgow Herald – Sale at Messrs Allan & Manns Brickfield, Bryceland on the road leading to Pollokshaws and a short distance from the south end of Main Street, Gorbals. 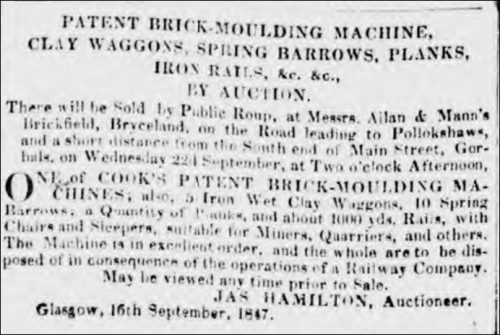 1852 – The Lost Gardens of Glasgow University by Arthur Donald Boney, 1988. – In July 1852 Messrs Allan & Mann, brickmakers, offered Faculty £300 per annum for the lease of the ‘upper green of the Observatory Park (Glasgow) for working out the clay contained in it for a limited number of years.’

31/10/1855 – Glasgow Herald – Found three sheep. The owner may have them by proving his property and paying expenses. If not claimed within six days from this date, they will be sold or otherwise disposed of to defray expenses. Apply to Mr Lockerbie, Port-Eglinton Brickworks, Glasgow. 30th October 1855.

Below – 1858 – Port Eglinton Foundry. There is a brickfield marked at the top centre of the map, at the end of Canal Street. There is a reference to drying sheds and kiln which I assume is the brickworks location. 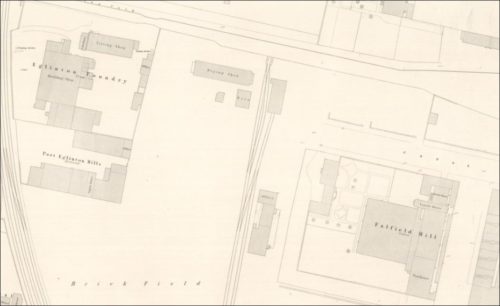 1858 – 1861 – ScotlandsPlaces – Brickworks near Falfield Mill, A Bow Esqr. A group of buildings comprising Engine House, Drying Shed, [kiln?] with a large Brickfield [–]
The property of A & T [Bow?] (Note – SBH – This is confusing. The Shields Bridge Brickworks on the 1858 map are on the west of the railway but the location of the works described here by ScotlandPlaces are on the east of the railway which were worked by Allan and Mann. It is possible of course, that in c. 1858 the works changed hands from Allan and Mann to A & T Bow). 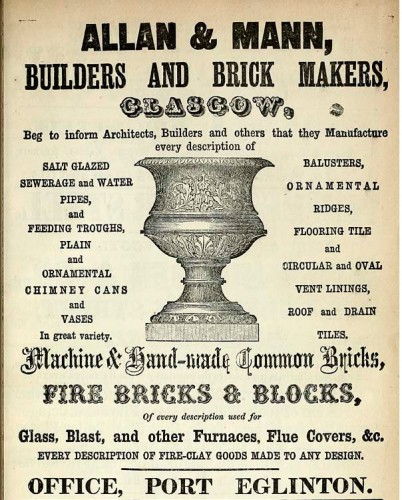 The Goods are second to none in the market and at lowest rates, white bricks (extra finished), for Facing, Buildings, in great variety. Also, glazed sewerage pipes, with patent or socket joints. Robert Brown.

01/08/1867 – The Dublin Builder – White brick – The subscribers, as agents for Ireland for Messrs Allan & Mann of Glasgow, would invite the attention of Architects and builders to the unrivalled brick manufactured by this firm. These are in every respect superior to any other white brick manufactured. Sample boxes and price lists will be sent free on application. W.D Henderson & Sons, Insurance Buildings, Victoria Street, Belfast. 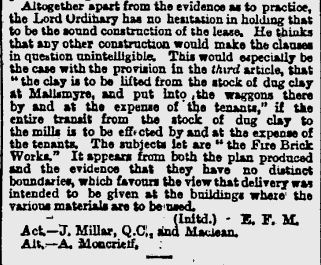 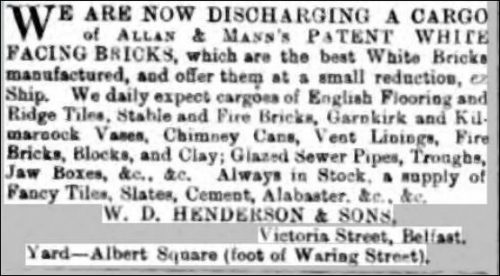 29/07/1870 – Greenock Telegraph – To builders – Daniel Devlin, in continuing the business carried out by Allan & Mann at 11 Patrick Street begs to intimate that he now has on hand a large and well-selected stock of Caithness and Arbroath pavement, drain pipes, chimney cans, ornamental bricks and fire clay goods of every description. Portland and Roman cements, Arden Lime etc  – 11 Patrick Street, Greenock. July 1870.

Tagged with: A and T Bow, Allan and Mann, Mallsmire, Port Eglinton, Rutherglen