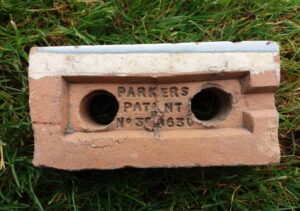 Found by Andrew Gemmell in the Milngavie, Glasgow area.

This is in theory an unidentified manufacturer but I do believe it is Scottish.

The only other example I have seen is one on the Penmorfa site and which was found near Wrexham.

My example and the Penmorfa example are both ‘baby’ bricks.

My example is enamelled to the front and measures 6″ x 3″ x 2″. Kilmarnock was the epicenter of the Scottish brick enamelling industry.

In the absence of a better assumption, I believe these were made at Kilmarnock.

………………… Messrs. John Gilmour & Co., whose pits and fields are at Bonnyton, Kilmarnock, and whose Glasgow Office and depot are at No. 10, Cook Street, South Side. This firm — an old-established one — was founded by Mr. John Gilmour, whose name it perpetuates. He, some years ago, was succeeded by Messrs. John Morton and James Parker. These gentlemen, though still retaining the name of the founder, are now the only active partners in the concern. Under their control the business, which from the first has been an important one, has attained more considerable dimensions, till now it is about the most notable of its class in the whole country, and is still developing in a remarkable degree. The partners appropriately divide the administrative work, Mr. Parker attending to the productive branch of the trade at Bonnyton, while Mr. Morton manages the distributive department in Glasgow……………. source 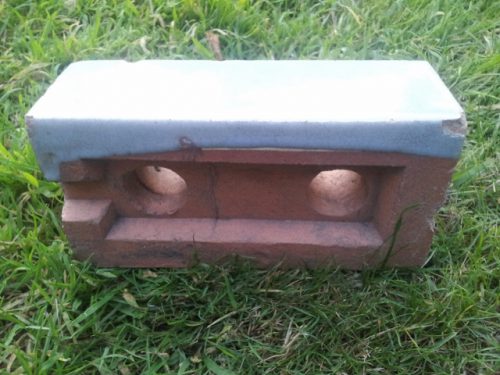 Dave Sallery of Penmorfa found his example in the heart of Ruabon country. He has also been working on the theory that Parker may have been a brick machine making company but as yet no relevant reference to this can be found. Alternatively could my example be a Ruabon product?