1874 – Established? – Kenneth Sanderson states The Niddrie Coal Company Ltd was incorporated in 1874 to work the Edge Coalfields of Niddrie, Edmonstone and Woolmet. The capital was 31,000, £10 shares of which 25% were owned by George Simpson of Benhar. A brickworks making fire bricks for the Edinburgh market was established about this time.  The company merged with the Benhar Coal Company Limited and the Niddrie and Benhar Coal Co Ltd was formed in 1882. 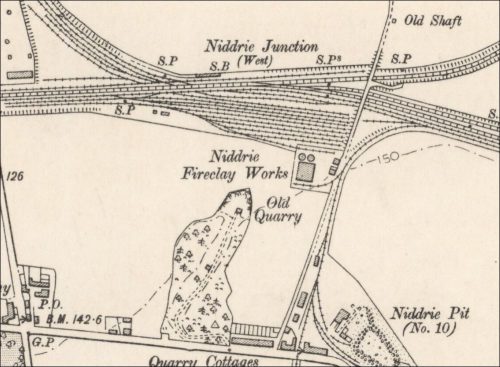 05/12/1930 – Musselburgh News – On Saturday afternoon, Edward Hockey, 24 Promenade, Portobello, was found lying on the ground in an unconscious condition at the foot of a kiln at Steele’s Fireclay Works, Niddrie, where he was employed as a gas fitter. He had fallen a distance of about 9 feet through a hole in the floor which was covered with asbestos sheeting. He was removed to the Royal Infirmary and detained in Ward 18 suffering from head injuries. 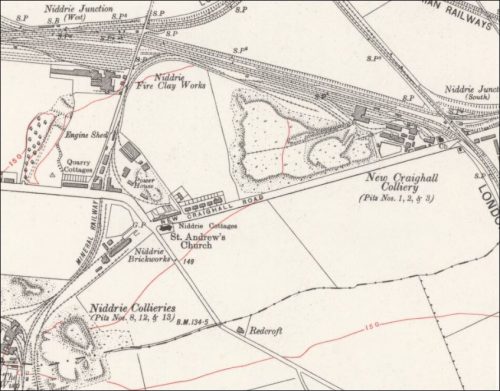 29/06/1934 – Musselburgh News – Judgment was given by Lord Wark in the Court of Session on Friday in an action in which Steele Brothers & Sons and Henry Steele, Niddrie Fire Clay Works, Portobello, sued the Niddrie & Benhar Coal Company for payment of £4009 in respect of damage to buildings belonging to the pursers at Niddrie, the buildings affected being the making shop and two kilns. The damage was alleged to be caused by subsidence due to the defenders working in the Blackchapel, Peacocktail and Carlton coal seams. The defenders denied liability. Lord Wark sustained the pursuers’ plea that by the terms of feu charters of 1898 and 1923 and a minute of the lease they were entitled to receive compensation from the defenders in respect of the damage to their buildings. The damages were assessed at £1900. His Lordship said he was of opinion that the pursuers had proved that the damage done to their buildings was due to mineral subsidence, and it was not maintained that if that was proved the subsidence could be attributed to workings for which under their lease they were not responsible. In respect of the damage to the making shop, he thought a fair sum to allow would be £400 and, as regarded the kilns, parties were not far apart on the question of rebuilding. He thought a reasonable sum for one kiln would be £850 and for two £1550. His Lordship thought the pursuers had failed to prove actual loss of profit due to restriction of the use of part of the making shop and of the kilns.

23/08/1934 – Musselburgh News – Niddrie v Glasgow. Steeles annual match at Joppa. The annual bowling match between Steele’s Fireclay Works (Niddrie) and Steele Brothers’ Crown Fireclay Works (Glasgow), which was inaugurated last year at Glasgow, was played last Saturday on Brunstane Road Green, Joppa. Favoured with delightful weather conditions, the game was enjoyed to the fullest extent, and after a keen and exciting afternoon’s play, the Niddrie workers were successful with a majority of eight shots.

05/10/1934 – The Scotsman – Reference to employees of the Steele Brothers and Sons Ltd, Fireclay Enamelling Works, Niddrie, Portobello donating £5 to the Gresford Pit, Welsh mine disaster fund.

15/02/1935 – The Scotsman – Subsidence at Niddrie. Claim against coal company fails. The First Division of the Court of Session gave judgment yesterday in a reclaiming note for the defenders in an action at the instance of Steele Brothers & Sons ( Ltd ), and Henry Steele, Niddrie Fire-Clay Works, Portobello, against the Niddrie and Benhar Coal Company ( Ltd ) The pursuers sued for £4009 in respect of damage to a making shop and two kilns belonging to them at Niddrie which they alleged was caused by subsidence due to the defenders’ working in the Blackchapel, Peacocktail and Carlton coal seams. Liability was denied by the defenders. In the Outer House, Lord Wark sustained the pursuers’ plea that by the terms of feu charters of 1898 and 1923, and a minute of the lease, they were entitled to receive compensation from the defenders in respect of the damage to their property; and his Lordship assessed the damage at £1900. The Division yesterday recalled the interlocutor of the Lord Ordinary and assoilzied the defenders. Their Lordships held that the conclusion arrived at by the Lord Ordinary that the damage done was due to mineral subsidence was not justified by the evidence. In their view, the pursuers had failed to prove that the hole which first disclosed itself and damaged the brick buildings and kilns was attributable directly or indirectly to the mining operations of the defenders.

13/03/1935 – Aberdeen Press and Journal – Daniel Dickson (23), 25 Corporation Buildings, Pipe Street, Portobello, was taken to Edinburgh Royal Infirmary suffering from injuries to the forehead and feet following a fifty-two-feet fall from a chimney. At the time of the mishap, Dickson was working on the chimney in the course of erection at Niddrie Fireclay Works.

27/04/1935 – Larne Times – Two workmen, Robert Forrest, of Mains Road, Portobello, Edinburgh, and Adam Shaw, of Milton Road, were fatally gassed while at work in a fireclay factory at Niddrie, Edinburgh, occupied Steele Bros, & Sons, last week. The men had entered a gas kiln to fit electric globes on lamps and were found lying unconscious on the floor by the manager of the works when he was making a round of inspection about five minutes later. It is not known how the tragedy occurred. Both men were about 40 years of age and were married. Forrest’s eldest son was working in a different department of the works when the tragedy was discovered.

02/05/1936 – The Scotsman – Works subsidence. Further adjournment of appeal. The House of Lords yesterday further heard and adjourned until Monday the appeal raising the question of whether a subsidence at the works of Steele Bros & Sons ( Ltd ), manufacturers of fireclay goods at Portobello, was caused by mineral workings in the mine of the Niddrie & Benhar Coal Company. Mr J . S . C . Reid, K . C ., Counsel for Messrs Steele Bros & Sons, the appellants, spent the whole day reading and commenting upon the evidence given at the hearing’s in Scotland, first before the Lord Ordinary ( Lord Wark ), and then, on the appeal of respondents ( the Niddrie & Benhar Coal Company ), before the First Division of the Court of Session. The latter Court reversed Lord Wark’s award of £1900 damages in favour of Messrs Steele Bros & Sons, and found that both the contention of appellants that the subsidence was caused by mineral workings and that of respondents that is was caused by erosion produced by the escape of large quantities of hot water from the works of Messrs Steele were not proved.

12/10/1937 – Berwickshire News – Thomas Waugh Reid, Niddrie Fire Clay Works, Portobello pled guilty to not keeping current records. He was driving a vehicle operating under a C licence. On examination of his records for 15th July, it was found the last entry was for 8 am the previous day. There was nothing about the load, journeys or rest periods. Fined 10s or 10 days.

Below – 05/11/1938 – The Scotsman – Lord Provost Henry Steele who was elected to the civic chair of Edinburgh yesterday at a meeting of the Town Council has represented the Portobello Ward since January 1932. A native of Dreghorn, Ayrshire, he is 59 years of age. As a young man he left Scotland for South Africa, where he gained business experience, and on coming to Portobello at the age of 27 he was persuaded to start in business there and has succeeded in building up a successful concern. He is a member of the firm of Messrs Steele Brothers & Sons, Fireclay Enamelling Works, Niddrie and he was largely responsible for making a commercial success of a patent process of firing fireclay enamelled ware. The works at Niddrie are among the most modern in the country having been developed from small beginnings … 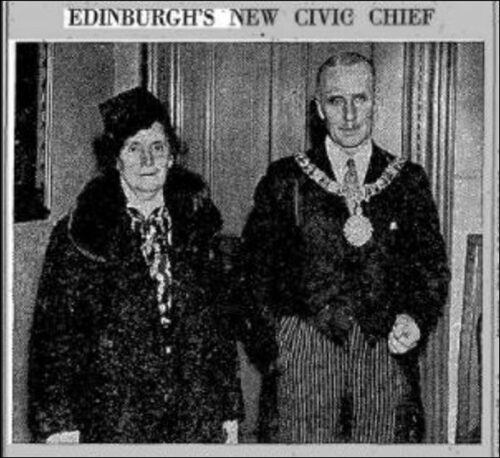 01/11/1940 – Musselburgh News – On Monday Mr Duncan McLeod passed away in hospital at the age of 88 years. For many years he had been in the employment of Steele Bros. & Sons, Ltd., Niddrie Fireclay Works. The funeral took place on Wednesday to Piershill Cemetery.

01/01/1941 – Daily Record – Knighthoods … Henry Steele, Lord Provost of Edinburgh. A native of Dreghorn, Ayrshire, and one of a family of 13, he has been Edinburgh’s civic chief since 1938. Spent four years in South Africa, where he held a responsible position in a big manufacturing concern. Returned to Scotland 35 years ago. Decided to set up a business of his own in Portobello. Is now head there, of Steele Bros. & Sons, fireclay manufacturers. Has represented Portobello Ward in Edinburgh Council since 1932. Is 61, and has a son and two daughters. Son holds a commission in an anti-aircraft battery. 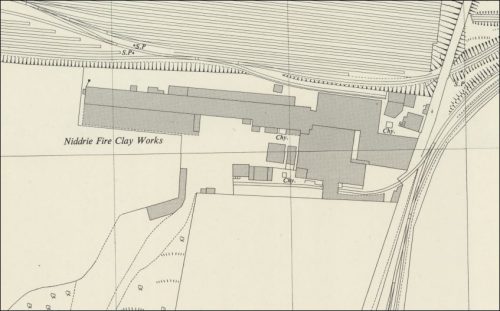 1947 – The Company was taken over by the National Coal Board.

19/11/1949 – The Scotsman – New fireclay mine at Niddrie. Messrs Steele Bros of the Niddrie Fireclay Works have started the driving of a fireclay mine close to the burn which forms the Edinburgh City boundary south of Niddrie. Hitherto the firm has drawn its fireclay supplies from Lanarkshire but boring revealed the possibility of getting them locally from the millstone grit formation within a quarter of a mile of the works. Some six or seven seams of fireclay between 4 feet and 6 feet in thickness are available of qualities suitable for both pipe making and enamelware. A delivery hopper has been built from which the clay will be taken to the works by lorry and it is hoped that the mine will be in production early in the new year. 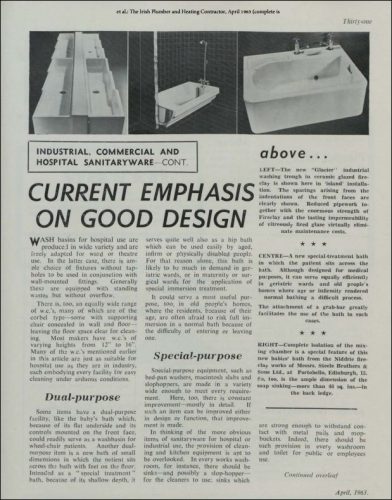 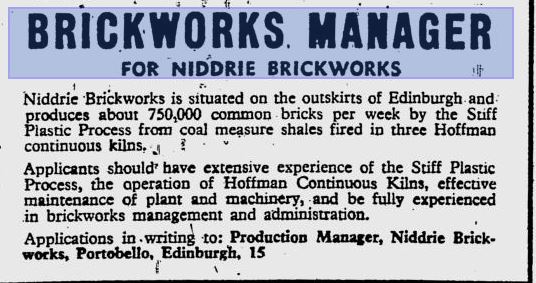 1990 – The works were at this time (and earlier) owned by The Glasgow Iron and Steel Company Limited. – GISCOL.