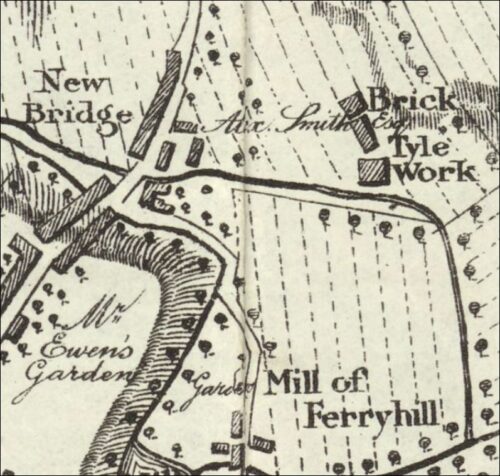 27/03/1776 – Caledonian Mercury – On Monday the 22nd April 1776, at 10 o’clock before noon, there will be sold by public roup, upon the ground, the use and possession, for this season, to end 11th of November next, of the brick and tyle work, mill, kill, (kiln?) shades, and utensils, with the clay already prepared, upon the Lands of Newbridge, near Aberdeen, belonging to the trustees for the creditors of Alex. Smith merchant there. At the same time will be sold, the stock of about 160,000 bricks, and from 40 to 50,000 tyles, at the said work. That the property of Newbridge, on which the said brickwork is erected, and the whole buildings thereon, will also be sold in a short time, and the day of the roup soon advertised. In the meantime, it is necessary that the creditors of Alexander Smith, by themselves or their doers, at Aberdeen should sign their accession to the trust right granted by him to Mr Moir of Scotstown, Doctor William Thom, and David Bartlet advocate in Aberdeen, and Geo. Strachan Keith of Auguborsk, in the hands of the said David Bartlet, without which his heritage, the only valuable subject for their payment, cannot be properly disposed of.  For further particulars, enquire to the said, David Bartlet.