11/02/1875 – Dundee Courier – Brickmaking by machinery at Muiredge is very busy, throwing off 960 per hour and even at that rate they are not able to supply the demand.

15/06/1876 – Dundee Courier – The extensive brickwork at Muirdege is at present very busy, employing a good number of men.

23/04/1887 – Fife Free Press – Extensive additions are being made at Messrs Bowman and Co’s Brickwork at Muiredge.

19/08/1890 – Dundee Advertiser – The accident to the sisters Alice and Ann Kinnear at the brickwork at Muiredge, Wemyss, has had a very sad result. Their rights hands were so terribly injured that both have had to be amputated.

14/05/1892 – St Andrews Citizen – Presentation – Alexander Peaston, brickmaker, on the occasion of his leaving Muiredge Brick and Tile Works was presented with a meerschaum pipe and tobacco pouch by the female workers as an expression of the estimation in which he was held. Miss Glover and Miss Linton made the presentation.

Below – 1893 – Muiredge Brickworks, Buckhaven, Fife. (By 1913 the brickworks are not recorded although Muiredge Colliery is still in situ.) 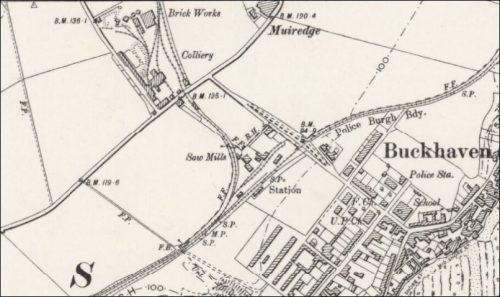 20/07/1893 – Fifeshire Journal – Fife cases in Dundee … At the same Court, James Galligan, hailing from Aberdeen, and Andrew Milton, from Glasgow, were charged with assault and robbery. It was alleged that on the night of the 7th or the morning of 8th June, when on the public highway about 200 yards on the south side of the level crossing on the railway leading from Leven to Pirnie coal pit, in the parish of Wemyss, they assaulted Thomas Steel, labourer, at present residing at Muiredge Brickwork, by beating him with their fists, knocking him down and kicking him. Accused were further charged with having robbed Steel of 6s 6d in money, a spoon, a table knife, six buttons and a handkerchief containing  1/2 lb of sugar, 1 oz of tea, 1/2 lb of soap, and a piece of cheese. Both prisoners pled guilty, and his Lordship, after referring to the drunken complexion of the case, said, in view of this fact, he would err on the side of leniency. They would each have to go to prison for 60 days.

08/12/1894 – Fife Free Press – Assault by a Labourer. Before Sheriff Henderson at Cupar on Tuesday, Thomas Croll, labourer, was charged with having at the drying stoves at Muiredge Brickworks assaulted John Newlands by throwing a piece of coal at him, which struck him on the temple above the right eye. He pleaded not guilty, and evidence was led. The Sheriff found the charge proven, and in respect of two previous convictions, he sent him to prison for thirty days.

18/05/1895 – Fife Free Press – How the Poor Live. For some time past the police in this district have been continually receiving complaints in regard to housebreaking and petty thefts, and as these depredations were generally supposed to have been committed by tramps who shelter at Muiredge Brickworks, it was decided to disperse the colony. Accordingly, at a late hour on Sunday night, Inspector Wyness, Sergeant Bisset, and eight constables proceeded to the brickworks and made a raid on the frequenters of the ash heaps. There were nearly 150 tramps and labourers living about the place, so that each of the constables secured a couple of prisoners, and had them conveyed to Buckhaven Police Office, where they were detained until train time, being afterwards conveyed to Cupar and brought before Sheriff Gray. Several of the tramps were recognised parties wanted by neighbouring authorities, while three were judicially examined on a charge of having broken into a butcher’s shop at Windygates, and stolen 20 lbs. of polony and 4 lbs. of beef steak. They were conveyed to Dundee Prison, where palonies and beef steaks will be only met with in their dreams. The other seventeen pled guilty to sleeping at the brickworks, and were each fined 10s, with the option of seven days in jail. The alternative was unanimously accepted, and the ragged army continued their march to Dundee.

07/05/1898 – Fife Free Press – Buckhaven Burgh Court – At a diet of this Court held on Tuesday, a batch of tramps, numbering 19, including a woman, were charged with sleeping at the Methil and Muiredge brickworks and were sent to prison for terms of 14 to 21 days each.

Below – 05/02/1903 – Leven Advertiser – This article refers to the Methil Brickworks as owned by the Wemyss Coal Company. The location of the works appears to be East of Buckhaven and West of Methil so it may relate to the Muiredge Brickworks. (Note – SBH – I am uncertain as to which brickworks this does actually relate to so I have recorded it here to ensure the information is not lost). 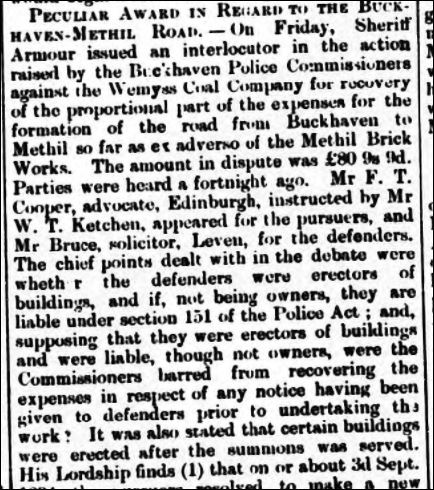 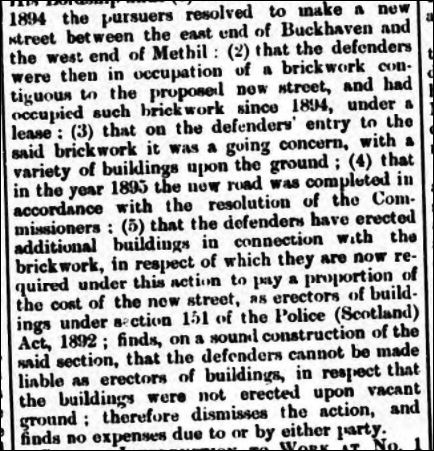 19/01/1905 – Edinburgh Evening News … A new dock is to be formed at Buckhaven, a greater depth of water being got than at Methil. Minor schemes are the new cement and brickworks at Methil and Muiredge.