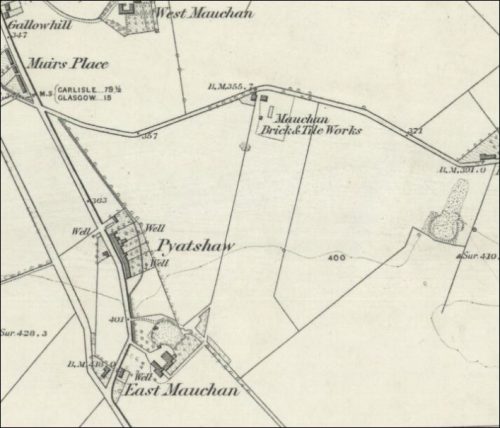 1858 – 1861 – ScotlandsPlaces – A wooden shed, a kiln, and a dwelling house, used for the manufacturing of bricks and tiles. Wrought by the propritor J. Marshall Esqr. of West Mauchan

22/07/1865 – Hamilton Advertiser – To let or lease – the farm of East Machan consisting of 150 acres imperial or thereby, close to the village of Larkhall where there is an excellent market for all farm produce. The lands have been held by the proprietor and have all been drained. There is no old tenant. Also the coal and fire clay on both Machans, with a brick and tile work, which has been going for a number of years to be let either together or separately. For further information apply to John Marshall, Machan House, by Larkhall.

28/08/1865 – Hamilton Advertiser – Acres of oats, beans, potatoes and turnips for sale at Machan … Roup will take place at the tileworks.

27/11/1869 – Hamilton Advertiser – To let – Machan Tileworks near Larkhall. Entry to the clay field immediately and the houses at Whitsunday.

13/12/1872 – Edinburgh Gazette – The Copartnery of Thomas Wallace and Company, brick and tile manufacturers at Millburn Brick and Tile Work, and Machan Brick and Tile
Work, in the Parish of Dalserf, of which the Subscribers were sole Partners, was dissolved of mutual consent, on the 10th day of December 1872. The Subscriber, Thomas Wallace, will collect the debts and liquidate the liabilities of the Concern. Thomas Wallace, Chas Stewart, Andrew Elder, Solicitor, Hamilton, Witness and David N Cross, Apprentice to the said Andrew Elder, Witness.

05/03/1903 – Southern Reporter – Two brothers drowned – On Thursday afternoon, John McColl eight years and Arthur McColl three years, brothers, were drowned in a disused clay hole at Machan Old Tileworks, Larkhall. The boys had been amusing themselves near the edge of the water and had accidentally fallen in.