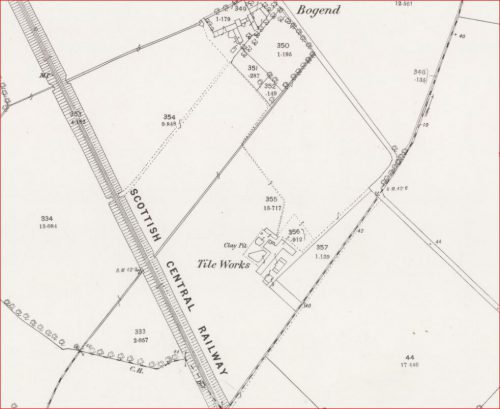 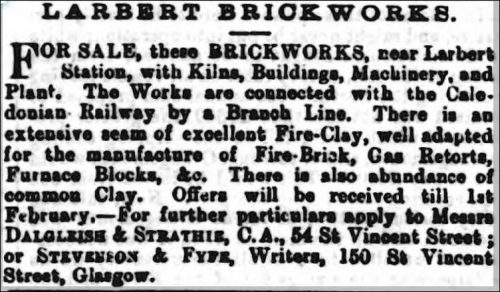 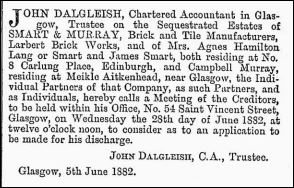 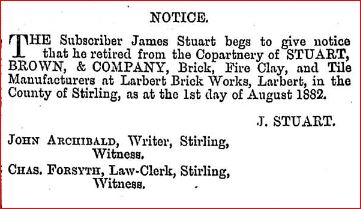 Below – 05/11/1887 – Aberdeen Press and Journal – Buckie and Portsoy Railway – action against the contractors. Some time ago an action was raised in the Dundee Sheriff Court at the instance of the Larbert Silica and Fireclay Company against Messrs W. J. Adams, contractors, Callender, for payment of 18,000 composition brick, delivered to defenders at Cullen, at the beginning of 1884. Defenders were then contractors for the formation of the Great North of Scotland branch line of railway between Buckie and Portsoy. Their defence was that the bricks were not conform to order and that they could not be used in the construction of a railway viaduct near Buckie. When the proof was led, Mr P. M. Barnett, engineer to the Great North Company, Aberdeen, and Mr John Headerson, Elgin (who superintended the erection of the bridge), both spoke as to having refused to allow the bricks to be used, as they were utterly unfit fur such a purpose. The defenders, however, sold the bricks for £25, after they had lain on the quay at Cullen for over a year. Sheriff Grahame on Wednesday decided the case in favour of the pursuers, awarding them £50, the sum sued for. In a note, the Sheriff said it was somewhat hard that the defenders should have to pay for an article which, through no fault of theirs, was found unsuitable for the purpose for which it was bought, and in a state disconform to the conditions of the bargain. But by selling the bricks without authority, they adopted the contract as fulfilled by the pursuers, who were entitled to keep them to its terms.

Below – 1888 – Larbert Silica and Fireclay Company of which the subscribers William Auld, bank agent, Denny and William Niven, brickmaker, Larbert were the sole partners, was dissolved by the retiral of the said William Niven as at the 15th day of May 1888. The business will be continued under the same name by the said William Auld who will collect the accounts due to and pay the debts due by, the late firm … 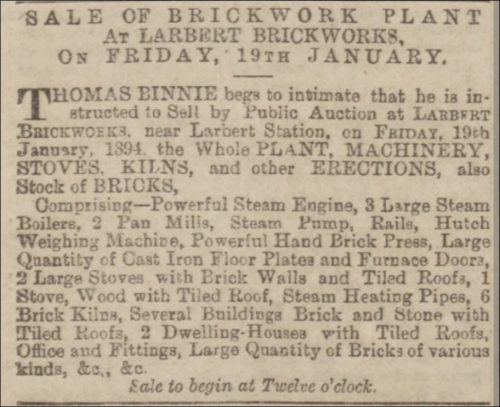 16/02/1895 – Falkirk Herald  -“To let, for such period as may be agreed on, Larbert Brickworks, with the fireclay, ganister, and associated coal, and the common clay in the lands of Inches. The works are about 1 1/2 miles north of Larbert Station.  There is a special siding from the Caledonian Main Line to the works, passing through a neighbouring proprietor’s lands.  The fireclay and ganister have long been worked, and are of excellent quality. The buildings, fixed plant, and machinery may either be included in the let or sold to the tenant. Apply to Messrs J B Sherriff & Co, 5 Wellington Street, Glasgow; or to John & W K Gair & Gibson, writers, Falkirk.” [FH16 Feb 1895]

Below – 1896 – Larbert Clay Works which were situated about 1/2 mile south of the Tileworks detailed on the map above. By 1913 – The OS Map is showing the works as disused. 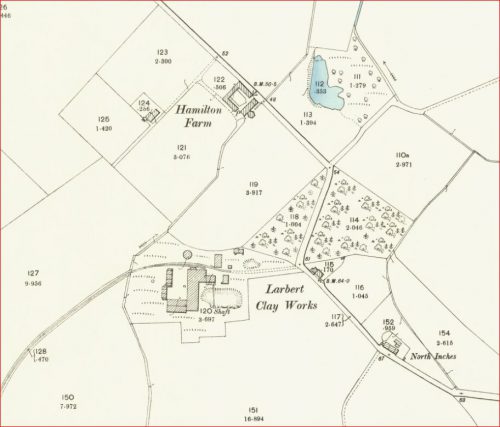 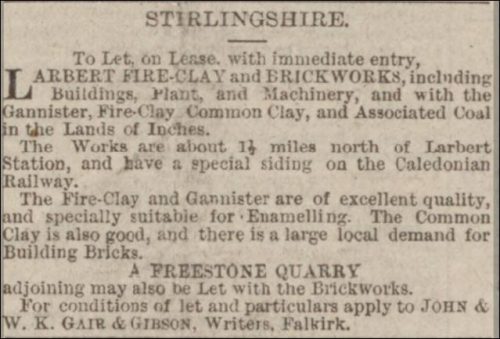 1878 – Broom, Brownlie and Bruce – Fire brick makers, Clayknows and Glasgow – this Mr Bruce may well be the same Mr Bruce of Stuart, Bruce & Co of Larbert. 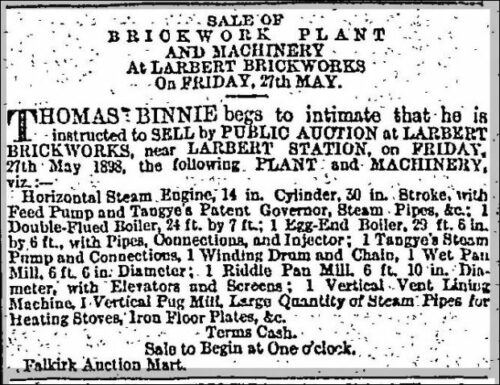 22/04/1899 – Falkirk Herald – Turnout for sale – Polo cart, light brown mare 14 hands and set of silver-mounted harness. Apply John Falconer, Stenhousemuir Brickworks, Larbert.                (Note – SBH – I am not aware of brickworks at Stenhousemuir but the Larbert Fireclay Works were situated very close to Stenhousemuir and they may be one of the same. Can anyone confirm or otherwise ?)