Cardowan Fire Clay Works, Stepps, Glasgow – This should be read in conjunction with the post on the Heathfield Fireclay Works.

Cardowan and Heathfield Works. The first of these works, belonging to Messrs. John Young and Son, was built in 1852 by Messrs. John Hurll and John Young, previous to that time of the Garnkirk Company. The clay is the Garnkirk seam and is of much the same character as the Stourbridge clay. The Heathfield Works were acquired about 1860 from Messrs. Miller and Ferguson (which see) and were largely extended and altered, and improved machinery introduced. The clay was won at 350 feet, passing through a solid bed of freestone of 120 feet, giving off much water; the seam itself is known as the Glenboig seam of clay, as it was first wrought at the ” Glenboig Works,” with which Mr Young was also till quite recently, a partner. At the “Cardowan Works” the firm manufacture the usual varieties of fire-bricks, blast-furnace blocks, gas retorts and fittings, vases, garden edgings, and plain and ornamental chimney shafts. At the ” Heathfield Works,” they produce fire-bricks, and vitrified salt-glazed pipes for sewerage and water purposes, and invert sewer blocks and all the usual salt-glazed articles. In 1874 Messrs. Hurll and Young dissolved partnership; Mr Young, along with his sons John and Robert, being now the sole proprietors. The product of these works when in full work is about 20,000 fire-bricks per day and about 1,500 yards of pipes weekly.

Adjacent to Mark Sprot’s extensive fireclay deposits of Garnkirk were others owned by Dr James Jeffray of Cardowan, Professor of Anatomy at Glasgow University for the very long period 1790-1848. In 1832 Professor Jeffray’s fireclay bricks were said to be “not let”, but soon afterwards a fireclay works was established at Heathfield by Peter Ferguson to make use of these minerals. By 1834 Ferguson had a store at the Garnkirk & Glasgow Railway terminus at Townhead, Glasgow, for his Heathfield firebricks and tiles. About 1846 the Heathfield’s firm’s name was changed from Peter Ferguson & Co. to Ferguson, Miller & Co. 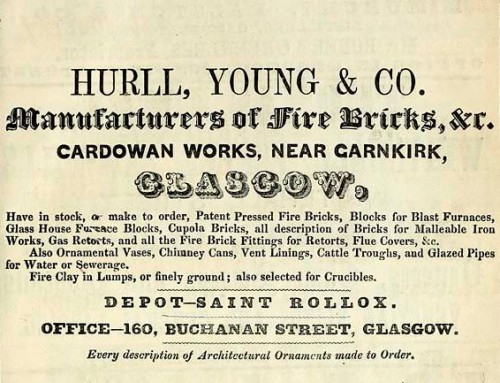 22/02/1862 – Renfrewshire Independent – Capture of daring burglars … a pair of boots were also found which were identified as having been stolen from a store at Crow Road, Garnkirk belonging to Mr John Hurrel (Hurll), of Cardowan Brickworks …

Below – 1875 – John Young and Sons, Heathfield and Cardowan. 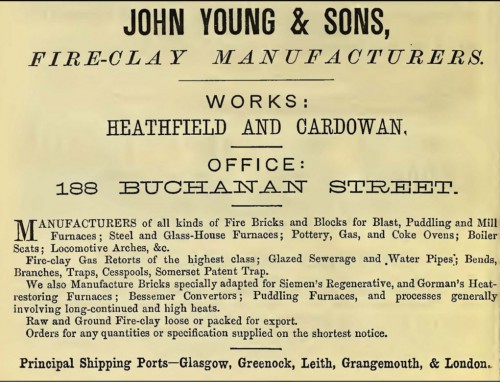 Below – 01/05/1884 – Clyde Bill of Entry and Shipping list – Advert. John Young and Sons, Heathfield and Cardowan Works near Coatbridge.

03/06/1887 – Glasgow Herald – The following circular has been issued. The firm (John Young Sons and Co) has been long engaged in the fire brick and tile trades and has also been to some extent in the coal trade. It is understood that the liabilities reach a good figure, yet as their situation has been in a measure known for a time, their facilities have of late been contracted.

Dear Sir, it is with extreme regret that we have to announce that we have this day been compelled to suspend payment. We have placed our works into the hands of Messrs Kerr, Andersons, Mair and Main, C.A, Glasgow by whom a statement of our affairs will be made up and submitted to a meeting of our creditors to be held in their chambers, 142 West George Street, Glasgow upon Tuesday 5th June at 12 noon, which meeting you are invited to attend. To facilitate the preparation of this statement please favour us by the return of post with a statement of your account to date. Your obedient servants John Young Sons and Co.

05/09/1888 – Kirkintilloch Herald – The Heathfield and Cardowan Brickworks, which have been at a standstill for over 12 months, have again started operations. 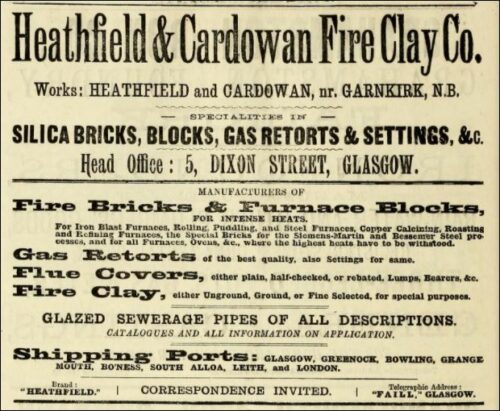 13/01/1890 – Glasgow Herald – John Young & Co V Heathfield and Cardowan Fire Clay Company. Lord Kincairney heard counsel in a note by John Young & Co, fire clay goods manufacturers, 42 Bath Street, Glasgow to interdict the Heathfield and Cardowan Fire Clay Company, 5 Dixon Street, Glasgow from selling fire clay bricks stamped with the name Cardowan other than goods manufactured by the complainers. In 1888 the respondents became tenants of the lands of Heathfield having purchased the business of John Young & Co from the trustees on the sequestrated estates of that firm. At the date of the sequestration, the fire clay in the lands of Cardowan in so far as let to them had been exhausted and the respondents on taking up the business issued a circular to their customers intimating that the brand on all bricks manufactured by them would in future be that of Heathfield. In July 1888, the complainers registered the words ‘Youngs’ and ‘Cardowan’ as their trademarks. Recently it came to the knowledge of the complainers that the respondents were stamping their goods with the same trademark as that used by the complainers, to the injury of the latters business. The respondents in their answers state that the fire clay in the lands of Cardowan never was exhausted by the sequestrated firm and that it was at present being worked by the respondents. The word ‘Cardowan’ had been used by John Young, Sons and Co in their business long before it was registered by the complainers. The word ‘Cardowan’ is a geographical term applicable to the works belonging to the respondents and the estates on which their works are situated and the complainers have no right or interest of any kind in any property or fire clay in connection with such works or estate. After hearing counsel, his Lordship passed the note for trial of the case…

16/07/1890 – The Scotsman – John Young & Co V Heathfield and Cardowan Fire Clay Company. John Young & Co, fireclay goods manufacturers and merchants, 42 Bath Street, Glasgow, the registered proprietors of the trademark  ‘Cardowan’ sought in this action to have the Heathfield and Cardowan Fireclay Company, Heathfield, Garnkirk, Lanarkshire and 5 Dixon Street, Glasgow, interdicted from using that trademark. In the other action, the Cardowan Company petitioned to have Young & Company’s name removed from the register of trademarks as owners of the ‘Cardowan’ trademark. Both actions have been taken out of Court, the Cardowan Company having purchased the trademark from Young & Co, each party paying their own expenses …

08/03/1893 – Kirkintilloch Herald – The first social meeting of the employees of Heathfield and Cardowan Fireclay Works was held in the Drill Hall, Muirhead on the 28th …

21/03/1894 – Kirkintilloch Herald -Works social at Chryston. The second annual soiree and concert of the employees of Heathfield and Cardowan Fire Clay Co. was held in the Drill Hall, Muirhead on Thursday evening. Mr John Faill occupied the chair, supported by Rev. Mr Davidson, Dr Lamont, Messrs. James Faill, Baird, Nicol, Smith, Marshall, Jarvie, Rigg, Monaghan, Montgomery, Tagg, Strachan, &c. There was a very large attendance. After tea, the Chairman delivered an address. He first spoke of the beneficent purposes which such gatherings, including as they did the ladies, served, and expressed the hope that all would thoroughly enjoy themselves. Heathfield Works was the oldest fire clay work in the district, having done duty first as a pottery. Its history extended back over sixty years. The smoke which belched forth from its many stalks was a fulfilment of the Scottish toast- “Long and well may your lums reek.” and was at once an evidence and a foretaste of a successful commercial undertaking. Cardowan had a later history, but sought to emulate the reek and growth of her elder sister, and, indeed, was now undergoing considerable extension. In conclusion, he referred to the cordial relations which existed amongst them, and that past experience, present position, and future prospects were all favourable and propitious and furnished occasion for mutual thankfulness and congratulation. (Applause.) During the evening a capital concert was sustained by an able company of professionals, and appropriate remarks were made by the Rev. Mr Davidson and Mr Baird. An assembly followed.

10/09/1902 – Kirkintilloch Herald – Railway accident. An accident which might have been attended with serious results at Cardowan Fireclay Works the Caledonian Railway Saturday last. The Garnkirk engine was executing the shunting operations at that work. About 1.30 it was shoving a number of waggons filled with fireclay into the siding when the first one left the rails at the crossing. Before the engine could be brought to a standstill, altogether three waggons had left the rails, one being overturned, the other two blocking the up line. The down line was clear, however, so that the traffic did not suffer any serious detention, although some trains were about half an hour late. In a short time, the line was completely cleared and the wreckage was removed Sunday.

29/10/1902 – Kirkintilloch Herald – Owing to a dull trade the Cardowan Fire Clay Works close today for an indefinite period. The fire clay trade has been very dull for a considerable time back with the unfortunate result that the Heathfield and Cardowan Fire Clay Co have found it necessary to close their works at Cardowan for some time. Forty or fifty men will be thus thrown idle at an exceptionally dull period of the year.

Below – 10/03/1911 – Milngavie and Bearsden Herald – Heathfield and Cardowan Fireclay Company agree to pipe clean water to their worker’s homes, albeit somewhat reluctantly!

03/05/1911 – Kirkintilloch Herald – Heathfield & Cardowan Fireclay Company Ltd agree to lay a 3″water pipe to Heathfield Square providing the District Committee lay the pipe from the main in Garnkirk Road to the boundary of their feu.

08/02/1963 – Wishaw Press – Ravenscraig keeps kilns busy. The new strip mill at Ravenscraig has been a blow against unemployment in Scotland – and not only among the ranks of the steelworkers. Two Scottish members of the National Salt Glazed Pipe Manufacturers Association have supplied many tons of fireclay pipes and fittings to the scheme. The pipes from four inches diameter upwards have been used in main and ancillary drainage networks. For the past five years Messrs Loudon and Russell Ltd of Morningside and the Heathfield and Cardowan Fireclay Co Limited, the two members, have been supplying fireclay pipe to the Ravenscraig Works. This has ensured full and continuous employment in both firms. Says Mr George Loudon, managing director of Loudon and Russell “During this time we have not only avoided laying off our people, but we have also taken on extra labour, and kept it”