Lanemark Brickworks may have been built on the original Afton Brickworks but the 1857 map does not show any works there so it is possible the early Afton Works were situated elsewhere. The new Afton Brickworks were later built nearby just to the north of the Lanemark Works and over the railway.

Below – 26/05/1893 – Ardrossan and Saltcoats Herald – A visit to the Lanemark Brickworks. Mr Roberts is the manager. 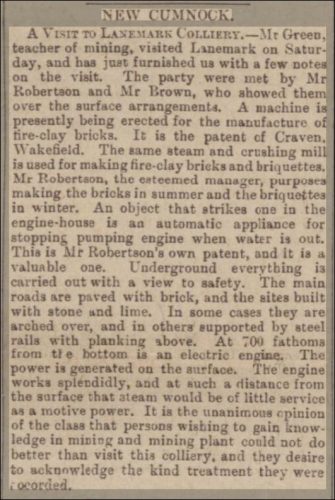 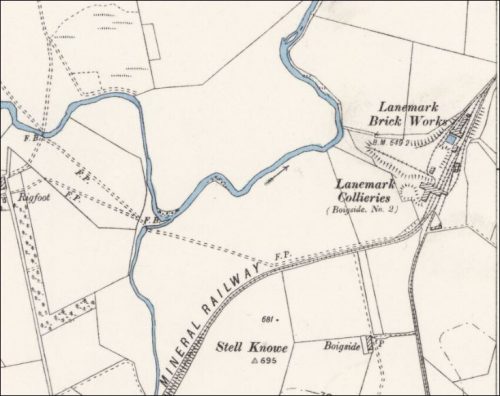 Below – 1907 – Lanemark Coal Co Ltd, New Cumnock, Ayrshire. (Note – SBH – Was the Lanemark trademark also used on bricks? If so I am not aware of anyone having possession of one). 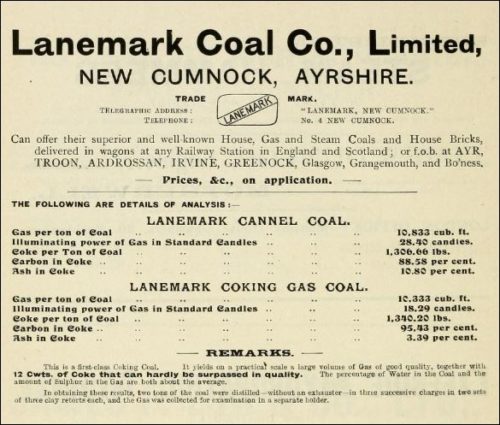 Below – 1908 – Lanemark Brickworks. The new Afton Brickworks were later built nearby just to the north and over the railway. 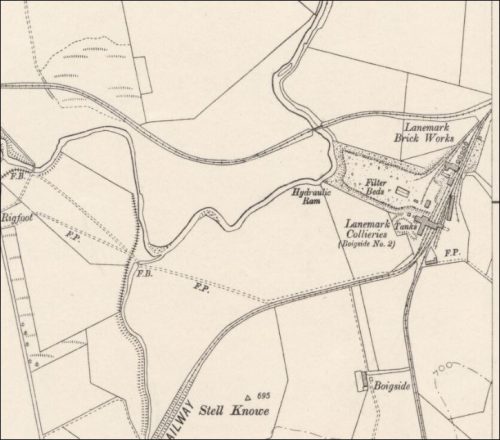 Below – Aerial view of Lanemark Brickworks. They were situated below the buildings on the south side of the railway line. The buildings are the ‘new’ Afton Brickworks which were built c.1927. 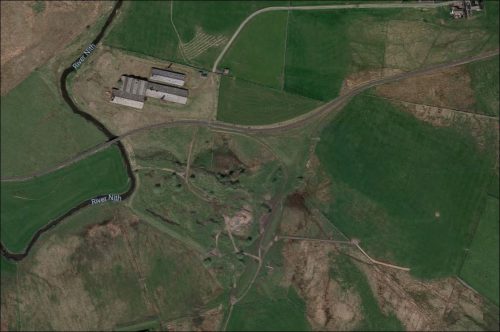 The following research was carried out by Dr Jimmy Begg and is reproduced by kind permission.

Lanemark Coal Company:
1865 – formed. The following year, the Board took a lease on the Afton Estate minerals,
1871 – sinking Afton No 1 Pit (Burnfoot),
1872 – Afton No 2 (Bogside – near site of disused Afton Brickworks). “Coal briquettes were made from the small coal that did not sell readily, kilns produced the “Lanemark” brick for their housing projects. Burnfoot and Knowetop were built in the 1870s plus small rows at Bogside and Lanemark Cottages. The Boig road was dotted with officials’ houses, Ardnith, Fernbank, Woodend, and Connelwood, the last-named serving as the company offices.” (George Sanderson – New Cumnock Long Ago and Far Away).
1895 – Afton No 3 (Rigfoot – the deepest pit in Scotland – higher than the Empire State Building!)
1908 – Company collapsed and assets were acquired by William Hyslop of Bank Estate. Rigfoot Pit (Afton No3) was closed down by NCCLtd in 1909 due to flooding. The Lanemark Brickworks next to Bogside (Afton No3) was also closed at the same time, as they had their own brickwork at Bank. Bogside Pit continued to be worked by NCCLtd until 1928 when it was closed after flooding. (George Sanderson – New Cumnock Long Ago and Far Away).