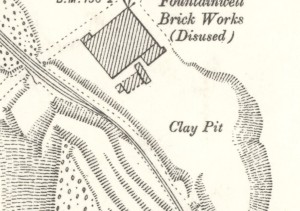 1858 – No reference to brickworks at Fountainwell/Keppochhill Road.

Below – 13/08/1877 – Glasgow Herald – For sale privately at Keppochill Brickworks, Keppochill Road a horizontal Steam engine … Also a quantity of bricks, sold in consequence of the ground having been acquired for building. Apply to James Dunlop at the brickworks. 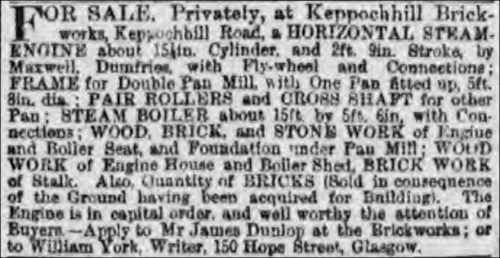 28/02/1879 – Glasgow Herald – Going Brickwork for sale. The brickmaking machinery, plant and lease of clayfield on the lands of Craighall, Port Dundas as lately worked by the deceased James Dunlop; 20hp engine and boiler, new pan mill and rollers, drying stove etc – Apply at 171 Craighall Road near the Work …

04/12/1883 – Dundee Courier – William Ferrie, moulder, 3 Lyall Street, Keppochhill, was fined £1, including costs, for conniving at the illegal employment his two daughters by Robert McAlpine, brickwork, St Rollox. The two girls were under 16 years of age. The Sheriff commented strongly upon the unfitness of such employment for young girls. (Note – SBH – I believe this reference relates to the Fountainwell Brickworks).

1893 – There is a suggestion from the Commercial Gazette London that Fountainwell Brick Co folded in March 1893. 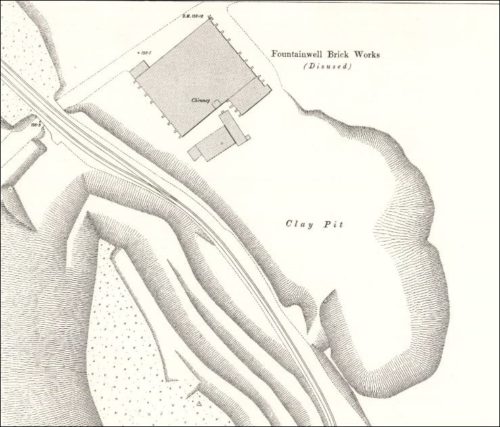