Below – 1799 – This map suggests that locals knew there was clay in the area of the subsequent Gladsmuir Brick and Tile Works with the reference to Claybarns. 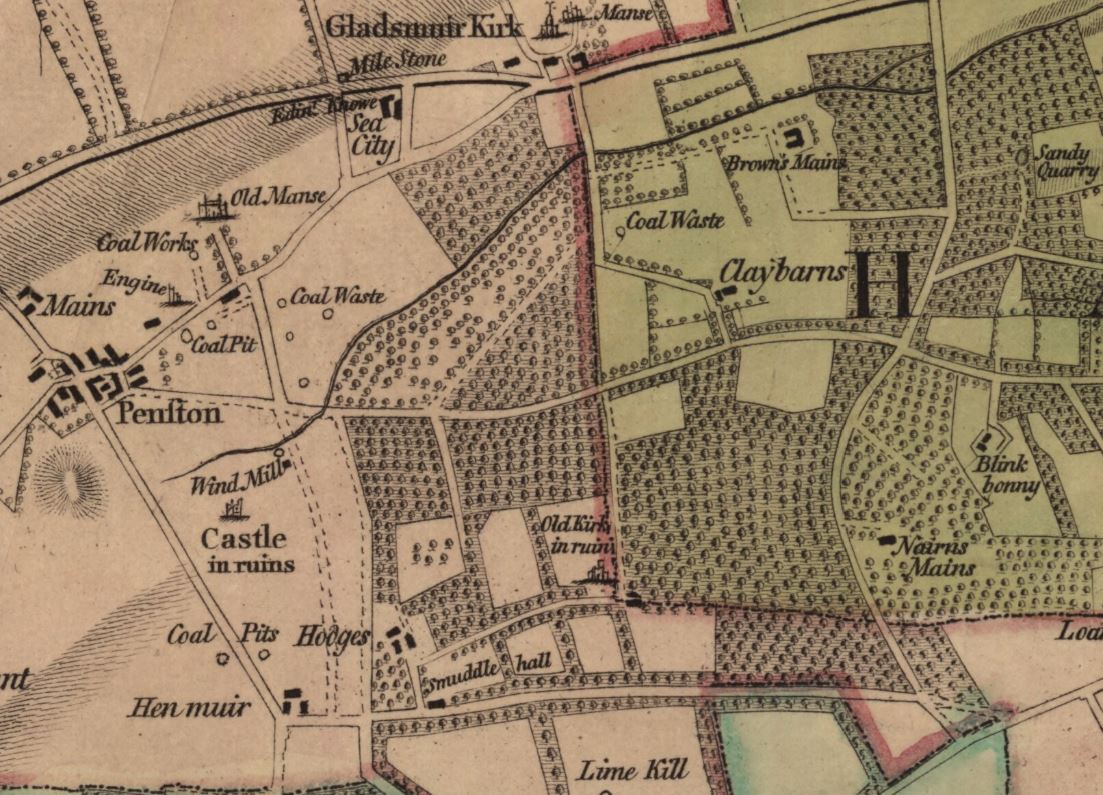 1879 – Reminiscences and notices of ten Parishes of the County of Haddington … Fireclay is abundant in the parish, although its presence is not now availed of as forming an industry. Gladsmuir brickwork, a little to the east of the present village, was worked up to 1879. A brickwork existed long ago at Hodges. The clay pits lay between the present farmhouse and the Old Kirk …

Below –1892 – Gladsmuir Brick and Tile Works. The works have gone by this time with only the water-filled claypits left.

In 1843 land was leased at Gladsmuir to build a Brickworks near where there were Clay-beds. Bricks, tiles, drainage tiles, fire bricks, furnace blocks and chimney cans, were all manufactured here.

The lease was taken out by the Christie Brothers who built the Gladsmuir Iron Works or The Blast as it was locally called in Macmerry. The bricks were used to build houses for the workers in Macmerry, Penston and  Brickrow in Gladsmuir.

The clay holes were later used for curling and are still just visible in the field at the southeast end of Gladsmuir.

Gladsmuir Brick & Tile Works (& Brickfield) (NT463732). Noted in the OS maps and operating through the 1840s – 60s. It operated, for at least a period, in association with ironworks at Macmerry under the Christie family. There are hints that the Gladsmuir facility has a longer history: to the south of the mapped site the place name ‘Claybarns’ is intriguing.

New Statistical Account for the Parish of Gladsmuir, East Lothian – Written by the Revd. John Ramsay in 1836. … Another pit has just been opened, a little below the North Mains, upon the side of the road leading from Penston to the London Road; but it is not yet finished. We find that in 1812, coal was wrought upon the property of Hodges. There was also a brick-work upon that property, about fifty years ago; but the working, both of the coal and the brick, has been discontinued. A proposal was made lately to set-a-going a brick-work there for brick and tile, but it was given up. Coal was wrought about thirty years ago at M’Merry, and also at the western extremity of the parish; but the pit was removed a little to the west in the parish of Tranent, where it now is. It belongs to Anderson of St Germains … (Hodges is just south of Gladsmuir – its is believed the brickworks referred in to in the last paragraph were possibly situated at Smuddle Hall or Smuddle Ha’ – see 1799 map above)