Gartliston (opened 1889) and Garnqueen (opened 1895) which was closer to Glenboig village, being about 1 mile south-east of the village.

Monklands – a cracking read – A personal recollection By Bob McMillan

P & M Hurll Ltd owned Birkhill Clay Mine in Bo’ness. Birkhill Clay Mine had high-quality fireclay deposits which have been exploited since the 18th century. The partnership of P & M Hurll Ltd, Glenboig, was established around 1887. Mark Hurll, a firebrick manufacturer from Glenboig, Lanarkshire, leased Birkhill from Hamilton Estates in 1908 and the company
took over the mine in 1916. P & M Hurll went into liquidation in July 1980.

The employees mostly reside in mine owners’ houses situated at Glenboig, known as Gartliston Square and Garnqueen Square

The new houses are described as follows: – 20 houses – 12 one apartment, rental £5 19s 2d including rates and doctors attendance; and 8 two-apartment houses, rental £7 13s 10d, including rates. Seventeen of the houses have a scullery – These houses were erected about 16 years ago – One storey, brick built – no damp-proof course – Outside walls strapped and lathed – floors wood, ventilated – internal surface of walls and ceilings in good condition 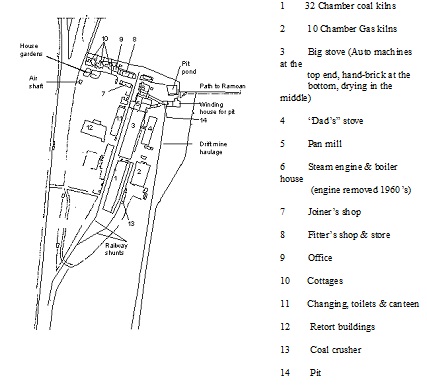 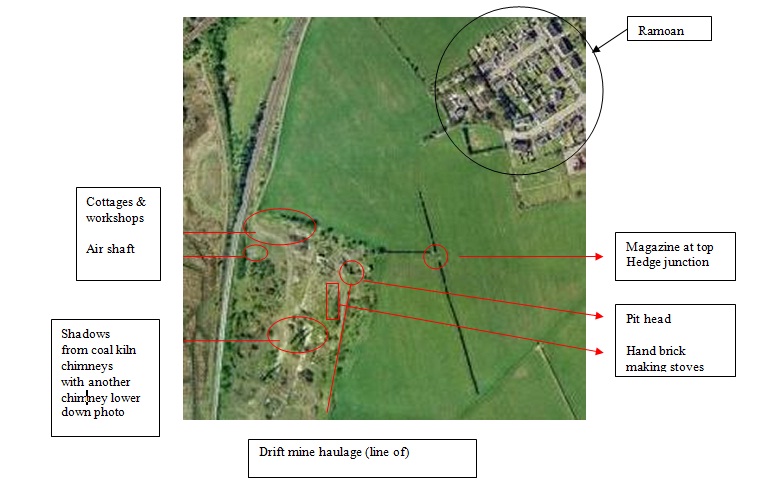 Below – 1858 – Glenboig – how the land looked before the brickworks. 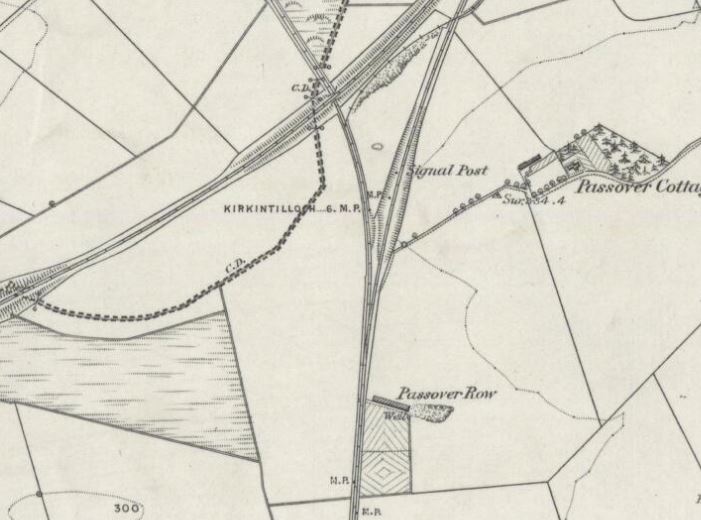 01/06/1881 – Shields Daily News – Mr Hurll, Proprietor of Glenboig Fireclay Works was last week fined £70 under the provisions of the Factory and Workshops Act 1878 for having had on his premises an unfenced shaft by which a young woman lost her life in April last.

Below – 23/12/1882 – First General meeting of the members of the Glenboig Union Fireclay Company – John Hurll presiding. 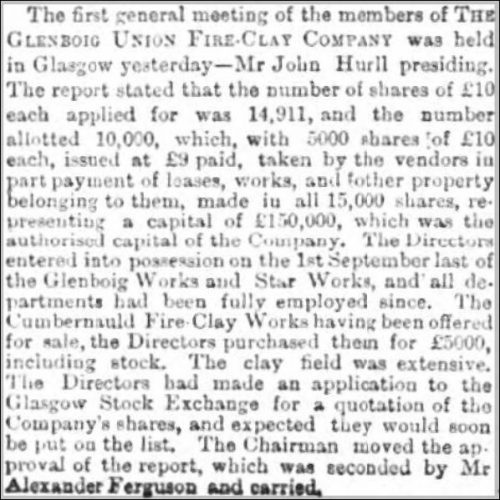 Below – 09/09/1888 – Glasgow Herald – Formation of a co-operative society in Glenboig. Mr Hurll addressed the meeting. 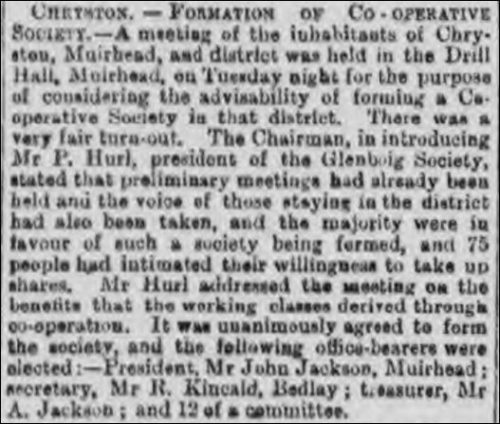 Below – 29/07/1889 – Glasgow Evening Post – Announcing that the Gartliston Fire Clay Works will soon be opening by the proprietor Peter Hurll. 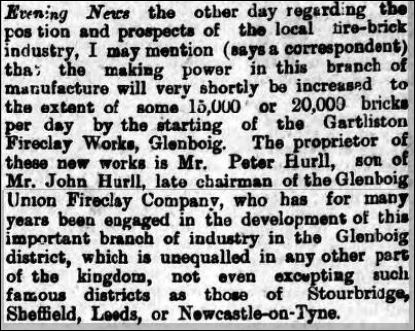 23/09/1890 – Edinburgh Evening News – Fire broke out in the oil store and joiners shop at Gartliston Fireclay Works, Glenboig last night belonging to Mr Peter Hurll. The fire lasted 2 hours and the premises were completely gutted. A large quantity of oil, wood and tools were destroyed. The damage which is serious is covered by insurance.

24/09/1890 – Glasgow Herald – Glenboig – Destructive Fire – Late on Monday night a destructive fire occurred at the Gartliston Fireclay Works belonging to Peter Hurll. The fire originated in an oil store and spread to the joiners workshop. A large force of workmen with a plentiful supply of water managed to confine the flames to these premises which, however, were completely gutted. The damage is considerable but the loss is covered by insurance.

05/09/1895 – Glasgow Evening Post – Contravention of Friendly Society Act. Prosecution at Airdrie. At Airdrie today, John Hurll, Treasurer of the Gartliston and Garnqueen Friendly Society admitted having paid the funeral costs for a child without receiving a registrars certificates of the death in terms of the Friendly Society’s Act. It was stated that these cases were becoming frequent and the registrar general wanted the practice stopped. The minimum penalty of 30s was imposed. 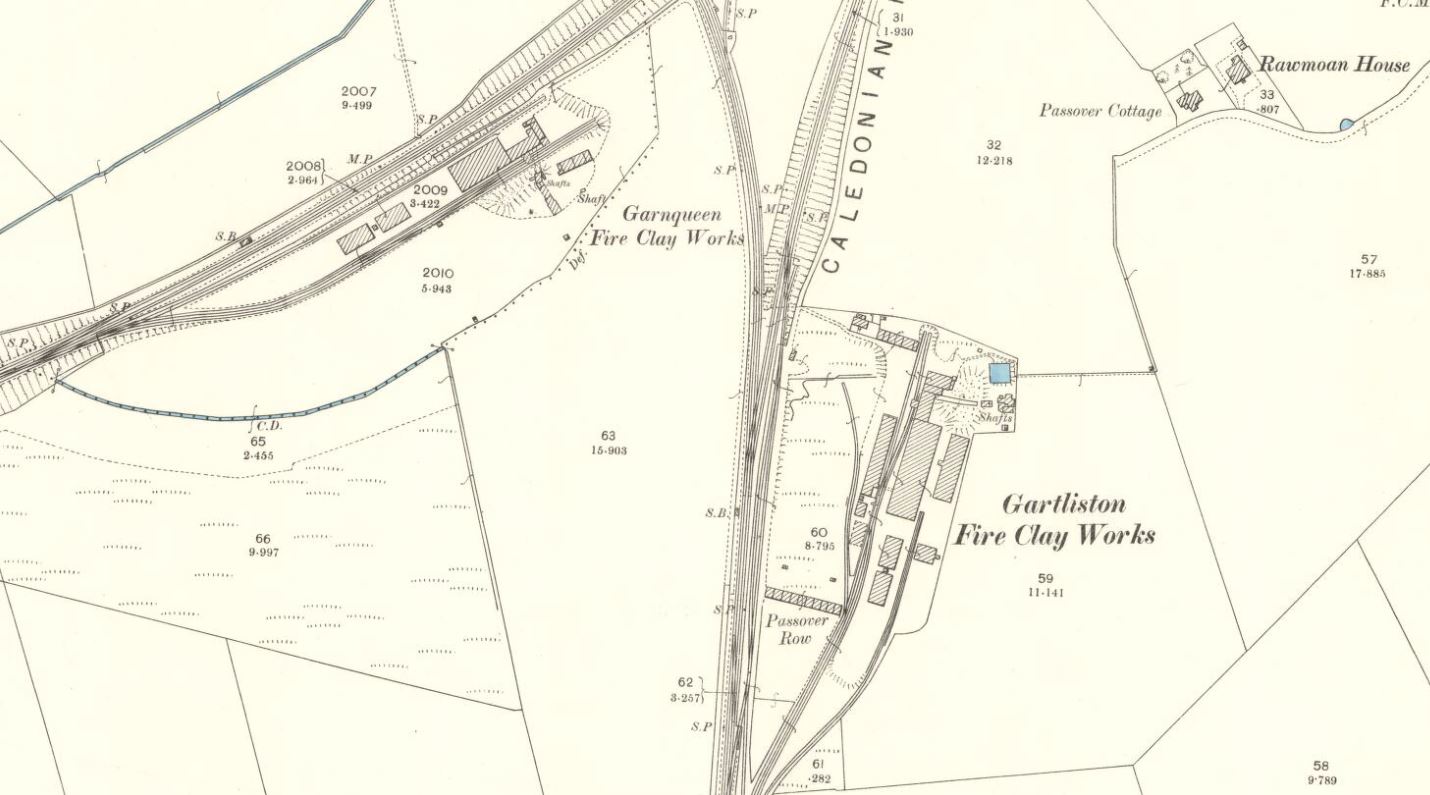 28/04/1900 – Airdrie and Coatbridge Advertiser – Assault in brickwork. At Airdrie J.P. Court on Thursday, James McMahon, labourer, 8 Passover Row, Glenboig, was charged with assaulting another labourer in the retort kilns in Gartliston Brickwork, on Monday, 16th April. Accused was fined 10s. or seven days.

04/04/1901 – Dundee Courier – Sharp sentence –  Before Sheriff Mair at Airdrie, Michael O’Shea fireclay miner, Glenboig was tried under the Conspiracy and Protection of Property Act with having on 27th March with a view to compelling James Delaney and Frank Martin residing in Carrick Street, Glasgow to abstain from working in Hurll’s Gartliston Fireclay mines, along with a large crowd, shouted and booed and called them ‘blacklegs’ and throwing stones at these men. A large number of witnesses were examined on both sides.

The Sheriff found the charge proven and characterising it as a very bad case, passed sentence of 3 months imprisonment with hard labour.

Robert Sloan, Clay miner, Glenboig and Michael Lorin, drawer, Glenboig were then tried on a similar charge on Friday by besetting 2 of the workmen who came from Coatbridge. As it appeared they were ignorant that by following up the men on the streets of that town they were guilty of contravening the Act, the Sheriff let them go with a severe caution.

20/07/1901 – Kirkintilloch Gazette  – Glenboig – Contracts have been signed by the Glenboig Union Fireclay Company and P & M Hurll with Mr Graeme Hunter for the supply of workmen for the clay mines at Glenboig, Garnqueen, Gartliston, Gartcosh and Heathfield for a period of 3 years. Mr Hunter has secured or is to secure all the houses of the evicted parties. Those already secured have been furnished and men employed by him are lodged there. A number of new workers are expected from Dundee in a day or two.

18/08/1911 – The Kirkintilloch Gazette – Chryston – Death of County Councillor Hurll – The death occurred at Woodneuk, Gartcosh on Monday of Mr Peter Hurll of the well known firm of fireclay manufacturers. Peter and Mark Hurll Ltd. Mr Hurll was in his 70th year and up until a month or two ago was actively involved in the business. On the advice of his medical advisor, he relinquished his duties and contemplated going off for a change and extended rest. On the retiral of Mr W.C.B Christie of Bedlay from Lanarkshire County Council, Mr Hurll acceded to a request from all sections of the community to come forward as the representative for the Chryston Ward in the County Council and was returned unopposed in November 1909. Mr Hurll led a strenuous life and while acting as Managing Director of P & M Hurll, attended very assiduously to the duties which devolved on him in his public capacity… The funeral took place yesterday to Bedlay Cemetery.

Below – 28/08/1912 – Kirkintilloch Herald – Fire clay mine at Gartliston damaged by rain and floods.

22/01/1913 – The Scotsman – Pit fireman fined. At Airdrie Sheriff Court yesterday, George Peters, pit fireman, Glenboig pleaded guilty to a contravention of the mines regulation act and special rule 126B by failing to inspect the working places of two miners before they proceeded to work therein in the Gartliston Fireclay Pit, Glenboig. It was pointed out that there might have been an accumulation of gas, and that there was danger of an explosion through no provision being made to prevent it. The Sheriff imposed the modified fine of £3 or 5 days.

11/01/1929 – Milngavie and Bearsden Herald – To mark the occasion of his appointment as managing director of the firm P & M Hurll Ltd, fire brick manufacturers, Glenboig, the workers of Gartliston and Garnqueen works met Mr Mark Hurll and presented him with a beautiful gramophone and records.

23/06/1933 – The Scotsman – Clay Miner Killed At Glenboig – A clay miner named John Gardner Fowler (23), who lived with his parents at 16 Gartliston Square, Glenboig, was firing a shot of compressed powder in No. 15 clay mine, Gartliston, when the shot suddenly went off, and he was caught in the flying debris. He sustained a fracture of the skull and other injuries, from which he died in the Glasgow Royal Infirmary. 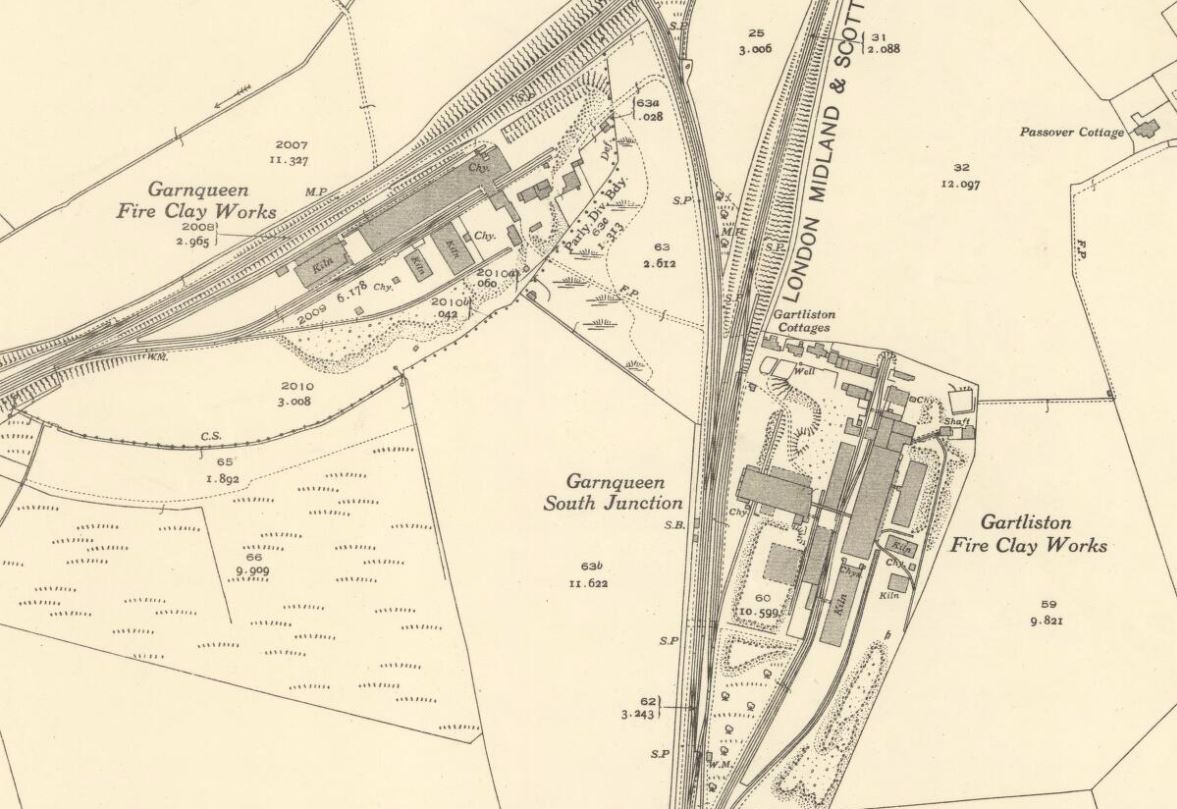 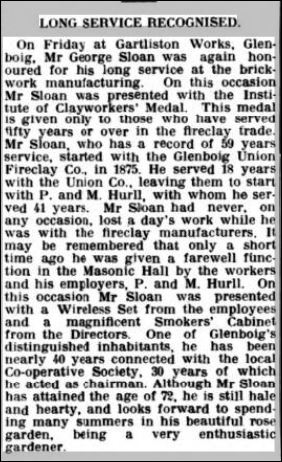 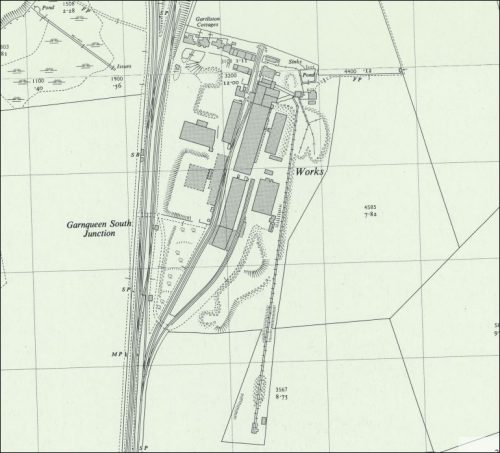 22/05/1948 – Airdrie and Coatbridge Advertiser – A Coatbridge girl, Helen Docherty,  19 years who threw an iron nut into a machine at Glenboig Brickworks wrecking it in order to get a shift off work was fined £10 at Airdrie Sheriff Court. The incident happened at the Gartliston Brickworks. Mr A. Hurll, Managing Director of the works estimated the cost of damage to the machine as £41 4s and the loss of production as £98. 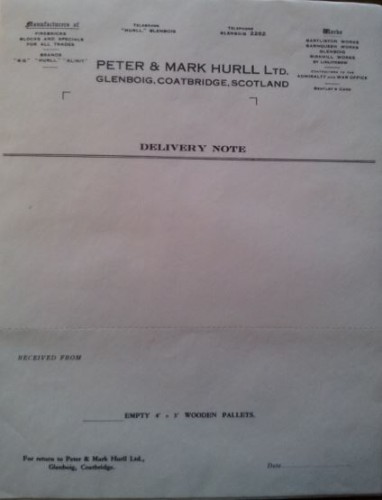 Note the reference to Bentleys Code – 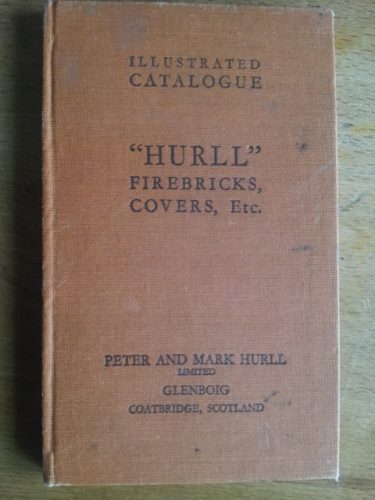 ON ADMIRALTY AND WAR OFFICE LISTS

Below is an extract covering the company history. Peter and Mark Hurll Limited – During the last hundred years, the name Hurll has been prominent in the history of the development of the Scottish firebrick industry, which in that time has built up at home and abroad a well-deserved reputation for the excellence of its products.

This long association with the industry started about 1835 when Mr John Hurll was first associated with the Garnkirk Fireclay Company, whose “Garnkirk” brand of firebrick was probably the first well- known Scottish firebrick.

In 1852 Mr John Hurll joined the partnership with Mr John Young, also of the Garnkirk Company, to form the firm of Hurll, Young & Company.  The first works built and operated by this firm were Cardowan Fireclay Works, but the rapid expansion of their business led to the acquisition in 1860 of Heathfield Works from Messrs Miller & Ferguson, and the purchase in 1865 of Glenboig Works from Messrs Thomson, McLean & Company.

Fireclay had been first worked at Glenboig in 1836, but development had been so slight that in 1860 the population of Glenboig’s village was only about 120. The Glenboig Works were carried on under the control of Hurll, Young & Company until 1874 when the partnership was dissolved, Mr John Hurll purchasing the Glenboig Works and Mr Young purchasing Heathfield and Cardowan Works.

During the period of control by the original firm, and later while controlled by Mr John Hurll as an individual, the works extended rapidly, and by 1882-when Mr Hurll sold the Glenboig Works and retired-had become the best-known Fireclay works in Britain with a world-wide reputation for the excellence of their products.

In 1888 two sons of Mr John Hurll, Mr Peter Hurll and Mr Mark Hurll, both of whom had a complete knowledge of the organisation and management of the older works, entered into a partnership.  Gartliston Pit was sunk half a mile to the south of Glenboig Station to the Glenboig Fireclay in the lower Millstone Grit, and Gartliston Works were built.  A sound connection was very quickly built up on the merits of the products of the works, as the raw fireclay proved to be of excellent quality and the methods of manufacture and business outlook of the new partnership thoroughly up to date.

The steadily increasing demand for “HURLL” firebricks, as the products of Gartliston Works are known, was met by the sinking of a second pit at Glenboig in 1895, and the building of Garnqueen Works. Further developments followed in 1908 when a seam of Fireclay near Manuel, Linlithgowshire, which had been worked to a very small extent in the middle of the last century, was investigated. This clay proved to be highly aluminous and of very constant composition peculiar to this district.  A mine was driven and firebricks from this clay are now marketed under the brand “KLINIT,” These bricks have set a new standard in high melting point natural aluminous refractories without admixture of other material.

In each district, only the true first- quality seam is worked, and the raw material selected to maintain the quality of the product at a uniformly high standard.  Modern plant is installed and maintained in the works to produce only sound, well-shaped, and hard-burned refractories.

The “HURLL” bricks, blocks, and retorts manufactured at our Gartliston and our Garnqueen Works, Glenboig, are justly favoured in Britain and its Colonies, on the Continent of Europe, and in many countries abroad for their long life when subjected to high or rapidly varying temperatures. It is very noteworthy that these bricks do not “spall” or break in the furnace, hence there is no weakening of the brickwork or damage to the contents of the furnace from falling pieces.  The material manufactured and burned by us has a minimum of expansion or contraction.

The “KLINIT” bricks are used where conditions are exceptionally severe, and there is a rapidly increasing demand for bricks made from this clay.  Where pulverised coal or oil fuel is used or where it is of first importance that a furnace should be kept under heat continuously for long periods, these bricks are unrivalled. The remarkably high thermal stability records, measured by Seger Cones, are noteworthy, as they reach the unusually high figure of Cone 34-35 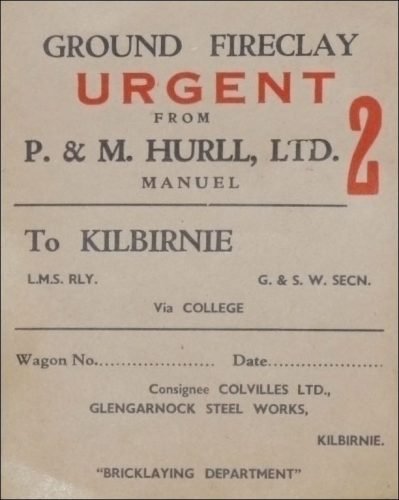 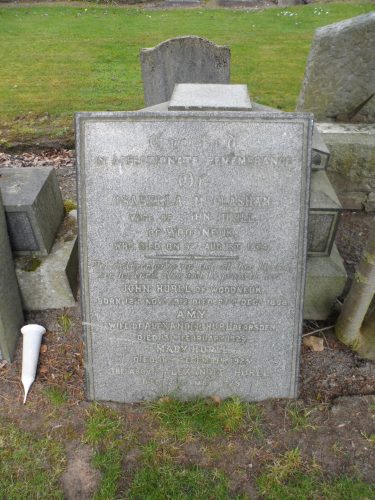