Home / Brick and Tile Works / Eglinton Iron Works Fireclay Works, Kilwinning, North Ayrshire
Eglinton Iron Fire Clay Works, Kilwinning.
The Ironworks was started by William Baird & Co, in 1846, and the brickworks was on the western side of the ironworks. The ironworks prospered and had eight blast-furnaces working by 1859.  the brickworks shown on the map of 1911 is a very small one and could not have produced all the firebricks required, but it could have provided the taphole clay which had to be freshly milled to retain plasticity. Bairds, with their experience at their massive Gartsherrie Ironworks, would no doubt bring in more refractory firebricks from the Glenboig area, for blast-furnace linings and hot blast stoves. Iron was produced on this site up to 1924. Source K.W Sanderson – Scottish Refractory Industry 1830 – 1980.
Portland Colliery Brickworks, Crookedholm, Hurlford, Kilmarnock. Portland Ironworks owned the brickworks which lay on the other side of the Irvine River, on the site of Portland Colliery No 4 pit. The Ironworks started in 1846 and worked intermittently until taken over by the Eglinton Iron Company in 1864. Five blast furnaces worked until 1890. The brickworks continued to make bricks until after 1900. Source Kenneth W Sanderson.
1845 – William Baird and Co-Construction of new works started at Eglinton; over the next twenty years extensive mineral leases were acquired and the ironworks at Blair, Muirkirk, Lugar, and Portland were purchased and operated as the Eglinton Iron Co.
Below – 1856 – Eglinton Ironworks but the brickworks are not detailed. 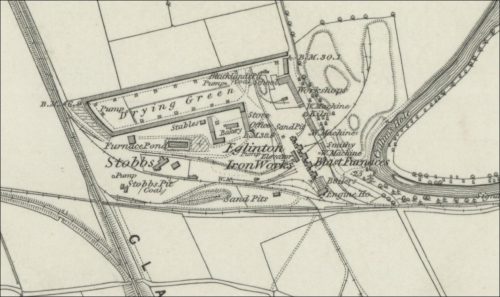 1858 – Mineral Statistics of the United Kingdom of Great Britain and Ireland for 1858 – Eglinton, clay of coal measures. Name of freeholder – Earl of Eglinton. Manufacturer – Eglinton Iron Coy. Manufacture – Stopping clay for blast furnaces and bricks. Estimated 2000 tons annually.
10/09/1881 – Irvine Times – A vagrant named Robert McGown, for having taken up his quarters in the brickwork of the Eglinton Iron Coy without leave on Monday night, was sentenced to 10 days imprisonment at a special J.P. Court held on Tuesday last.
Below – 1911 – Eglinton Ironworks Brickworks. 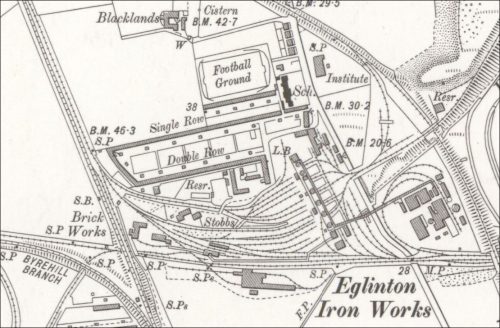 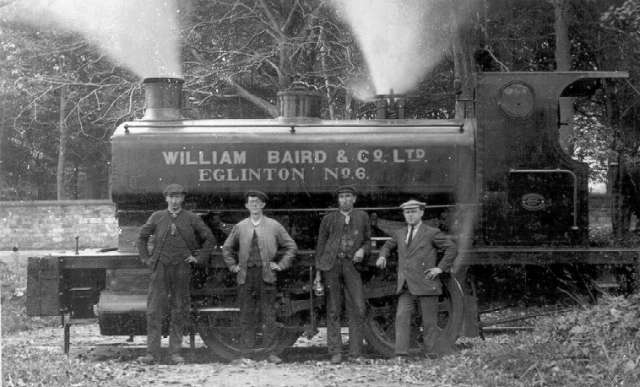