Broom, Brownlee and Bruce, Greenhill, Falkirk are listed as the makers of Claynows bricks by Falkirk Museums and Archives and they may well be correct however I suspect there will be a connection to the details noted below. 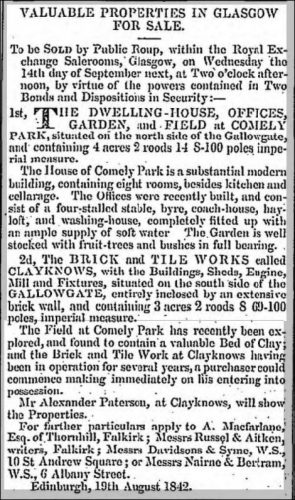 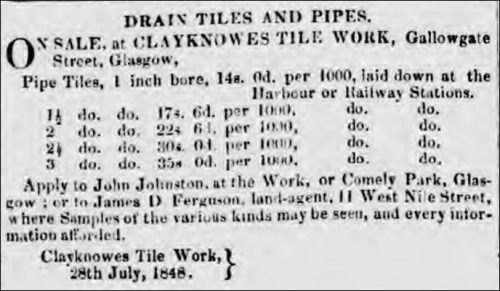 13/05/1850 – Glasgow Herald – Valuable properties in Glasgow – to be sold by public roup … that other valuable property on the south side of Gallowgate Road called Clayknowes consisting of 17203 square yards, bounded by the Gallowgate Road on the north along which it extends 175 feet. This property is surrounded by a high brick wall and is also suited for a large Work requiring extensive accommodation or it may be continued in part as a drain, tile and pipework as at present having on the ground a steam engine, clay mills, patent drain, tile and pipe machines, extensive drying sheds, kilns, stoves and other conveniences for their manufacture and for which the work now commands a steady and increasing demand. Apply to Mr Johnston, Comely Park, Glasgow. 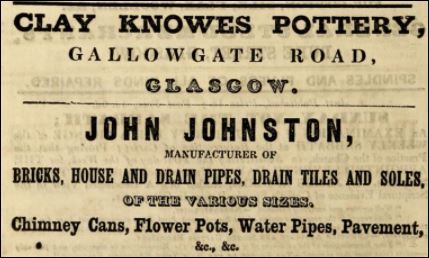 Below – 1878 – A reference to Clayknows in Slaters Advertiser for Denny Stirlingshire but also note the reference to Glasgow. (So was the Clayknowes Pottery in Gallowgate Glasgow  part of the same company that owned the Clayknowes Brickworks in Bonnybridge?)

So are bricks marked Claynows from Gallowgate, Glasgow or Bonnybridge? I suspect from my find locations that they are from Bonnybridge as I have found some on and near the Clayknowes Brickworks site at Bonnybridge.