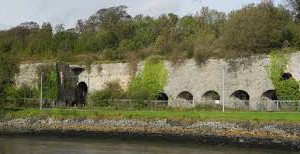 The Survey of Scottish Brickmarks  – click me – have recorded the letter ‘W’ as being a product of the Charlestown Brick and Tile Works, Fife c.1869 – 1882 (?). The mark was recorded as relevant to a common brick. (Note – SBH – I assume the ‘W’ stood for Alexander Watson who apparently owned the brickworks around this time).

The Charlestown Brick and Tile Company which was situated to the E of Fiddler’s Hall (NT 060 841), was founded circa 1780. Fireclay was found whilst quarrying for lime and coal and was utilised to provide the bricks for lining the Charlestown limekilns. The bricks were also used for the interior walls of the Charlestown village cottages and drains were also manufactured. The works closed in the 1860s after the fireclay deposits were exhausted and the new brick plant was set up to the NW of Broomhall on the Estate. Clay was found nearby (a curling pond fills the former pit). The bricks were made by forcing the clay into a mould and cut by wire. A steam engine was used to power a clay pugging plant and a sawmill. The bricks were air-dried in the shed. Only one chimney remains; formerly there were 2. The chimney fire produced a draught by which the tile and bricks were dried. The brickworks closed in 1879. The engine remained for the sawmill until the 1950’s when it was replaced by electricity. Various buildings associated with the former brickworks still remain but are not part of the Statutory List, such as the cottages and an adjacent drying shed, the bays of which have been infilled with brick. The chimney is no longer in use and the drying shed is used for storage. Source

01/08/1840 – This Establishment is now in full operation, and have for sale common brick of every description. Fire brick of every description. Drain, house, and ridge tile, at moderate prices. The common clay from which the above are manufactured is very fine, and the fire clay proved to be of very superior quality. The works are situated close to the harbour of Charlestown, a port well known in the Firth of Forth for its extensive shipments of lime and coal so that parties at a distance can have cargoes made up with the various articles on the most advantageous terms, and at the lowest rates of freight.

Charlestown Brick and Tile Company was founded in 1780. This was one of the industries to spring up around the village. There have actually been 2 brickworks. The first was located on the road down to the foundry and was served by a branch of the wagonway. There are no signs of these works today.

Fireclay was found around the seams coal pits and lime quarries. This had often to be removed before the lime and coal could be reached. So this was another example of using the material at hand and putting them to good use. Firebricks were always required at the kilns. The intense heat meant that the bricks had to be replaced and the kiln relined: sometimes at the end of each season. There was also a small trade in fireclay with the Baltic countries.

The Government of the day gave grants for drainage and this gave rise for a big demand for drainage tiles. This was met by the brickworks and many farms around purchased land drain tiles from there. The first ones made were only 2″ wide and that was too small and the drains were virtually useless. The diameter was increased and the drains were successful. The method was to grind down the clay and then squeeze it through a nozzle. A steam engine was used to power this. It was then cut into 2′ lengths and dried in an open-sided shed.

The estate paid the wages of the workers and a wage sheet of 1846 shows the workers were paid by the day, the rate determined by their skill. This was approx 1/10 (9p) for full-time employees. There are listed a number employed for shorter days at 6d per day. These were probably labourers and boys who moved around the various works as required. One Alan McGrouther was paid the handsome sum of 4/2 (21p) per day – presumably, he was the manager or foreman. It is likely that the men were also paid a bonus depending on how many bricks were produced.

The fireclay from the mines ran out in the early 19th century and a new brickworks was built on the estate. This was located about 1/2 mile west of Broomhall house. The buildings are still there and the clayhole next to them is now the ‘brickworks pond’. This is now used by curlers of the Broomhall Curling Club when it freezes to sufficient depth and bonspiel can take place

Below – 06/03/1845 – Stirling Observer  – Reference to the Charlestown Brick and Tile Works in an advert for the sale of Broomhall Estate –  The following farms on the Estate of Broomhall are to be let for 19 years or such period as may be agreed upon … Brucehaven, containing 140 arable Scotch acres or thereby. This farm is situated close to the shipping ports of Brucehaven and Limekilns and is distant about 1 mile from the lime, brick and tile works and Port of Charlestown and about 3 miles from the populous manufacturing town of Dunfermline 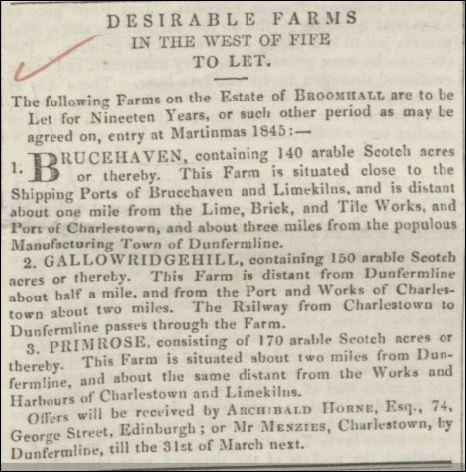 1853 – 1855 – ScotlandsPlaces – Extensive works for the manufacture of bricks, tiles, and drain pipes &c. It is the property of the Earl of Elgin. 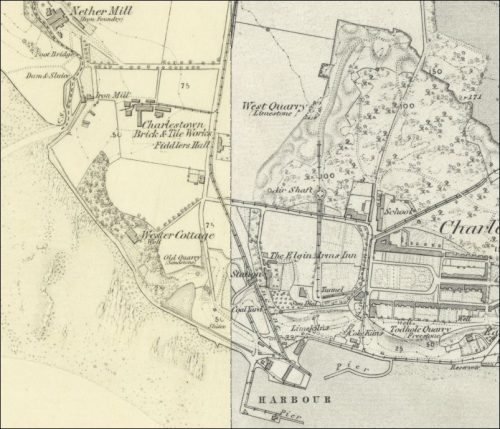 Below – 28/07/1859 – Dunfermline Press – Article on rambling around Charlestown with reference to the brickworks. Mr McGruther is the manager. 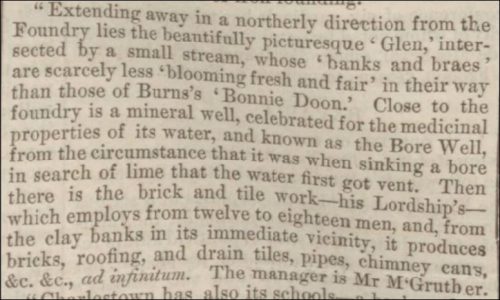 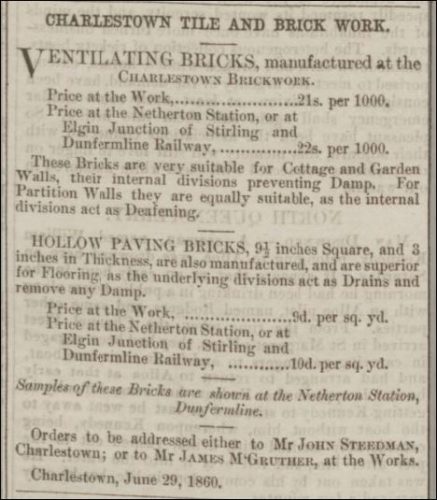 18/08/1866 – Dunfermline Saturday Press – Roup of potatoes on Broomhall Estate. To be sold by public roup on Wednesday 22nd August, 6 acres of excellent potatoes consisting of earlies, rocks, Orkney reds in Park at Charlestown Brickwork on the Home Farm, Charlestown. To be put in lots to suit purchasers. Roup to begin at five o’clock pm. Charlestown 17/08/1866. (Note this advert may actually refer to the Broomhall Brick and Tile Works, Charlestown).

06/09/1866 – Dundee Advertiser – A ship arrived at Charlestown from Hamburg and a crew member had died of Cholera en route. Another crew member was ill but being treated by Dr Watson, Limekilns.  The ship had been seized and disinfected. The Inspector of the Poor and Mr Munroe of the parochial board management committee had visited the dwelling house at the old brickworks and they thought it would be very suitable for a hospital.

08/09/1866  – Dunfermline Saturday Press – … Mr Pearson then reported that the dwelling house of the old brickwork of Charlestown had been procured as a cholera hospital and that it was in the course of being put in a very suitable condition, should it be required.

c. 1869 – c. 1882 – The 1985 publication ‘A survey of Scottish brickmarks’ suggests that Alex Watson was the owner. (Note – SBH – From information contained in archive newspapers Alexander Watson may well have been the Broomhall Estate Manager, Charlestown and as such manager of the brick and tile works).

Below – 1895 – Map showing the ‘old’ Charlestown Brickworks. ( Or Broomhall Brick and tile works) 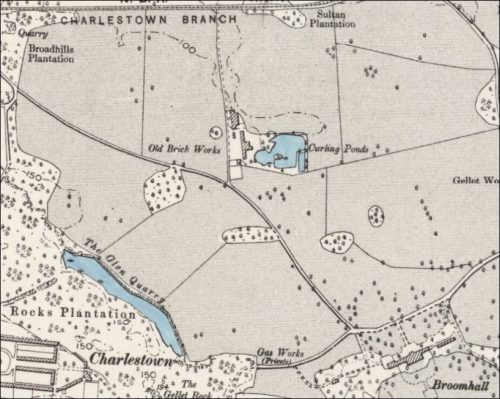 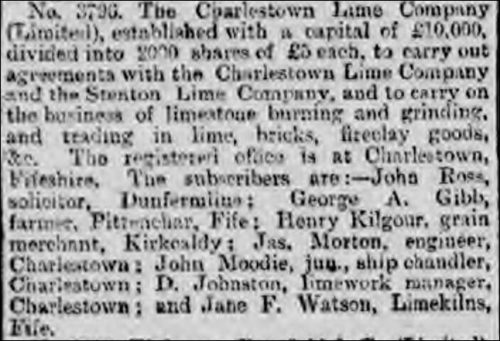 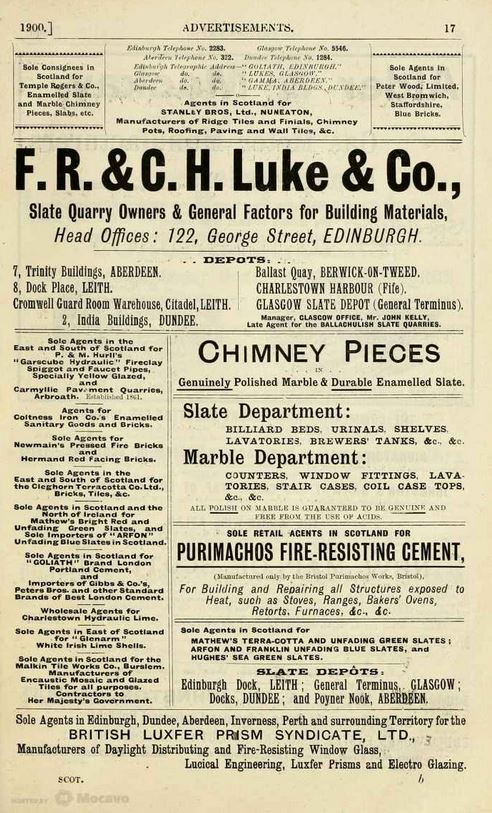 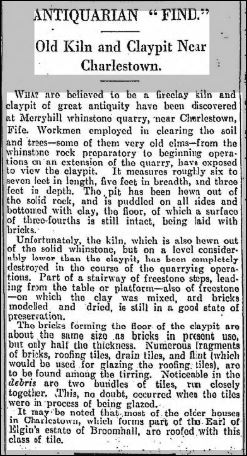 Below – With regards to the entry dated 23/09/1930, The whinstone Quarry at Merryhill is not in the immediate area of the 2 brickworks shown on the previous maps on this page so it looks like these tileworks are a 3rd site that was situated in the area and possibly the earliest. This map is dated 1854 and shows the Merryhill Whinstone Quarry. 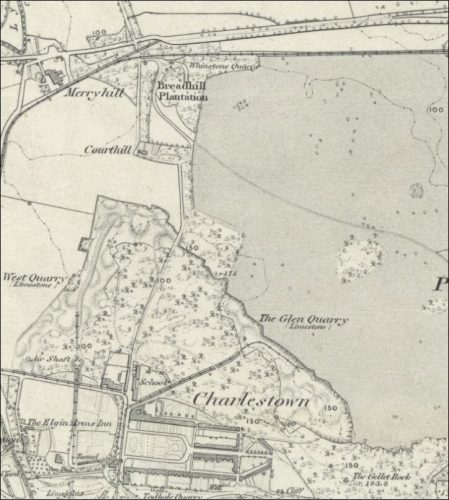 Below  – And further to the above this 1895 map shows the location of all 3 tile works in the Charlestown area. 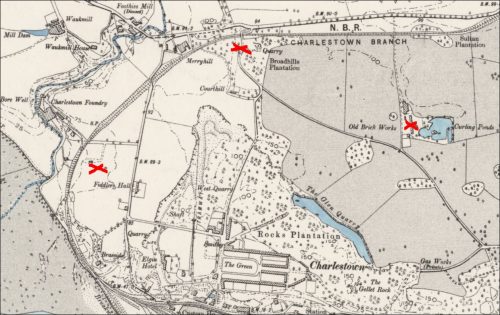