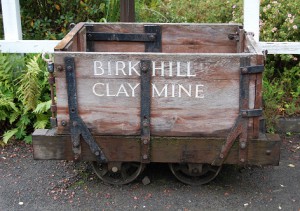 The high quality Glenboig fireclay deposits in the area of Birkhill have been exploited since at least the 18th century. The oldest shaft is situated on the east side of the river, just north of Tod’s Hill. Work here presumably continued until the beginning of the 20th century, as a Bradley & Craven steam mill was installed at the clay processing plant to drive the crusher, pump and pulley in 1906.

The second series of workings are further north and were started by P & M Hurll in 1913. At some stage during the 1930s electricity was installed and the steam mill was taken out of action. This was replaced by a 65 horsepower Fawcett Incla Mill. This could process 10 tons of clay per hour, compared to the 1 – 2 tons that the old mill could manage.

The mines were worked on the ‘stoop and room’ method and all excavation was manual. After the clay was removed from the work face by pick and shovel it was loaded onto bogies and hauled by pulley to the surface, across the River Avon and up the scarp to the crushing mill. On average the clay face advances 4 feet a day, producing 100 – 120 tons of clay over the same period.

After milling the clay was loaded onto lorries or transported via the railway line. With regard to the latter, the clay went to Bo’ness and from there to Glenboig or the nearest shipping port.

All unmilled clay went to Glenboig however if the fireclay was milled it was separated into 2 grades – 1 for the production of refractories and 1 for export. The former went to Glenboig and the latter to areas as diverse as Pen Ang, the Philippines, Manilla and Afghanistan. Glenboig frequently returned broken bricks and the grog product was initially exported to Norway. Later however it was returned to Glenboig to be added to their clay mixture. The ground down grog (or chanet or chanot) was used in building and repair work and also in the manufacture of aluminium.

Tate and Lyle were one of the Company’s biggest customers as milled clay is used in the process of sugar refining.

The worker’s cottages on the left of the entrance drive were built in 1913. When the most recent mine was opened 21 men were employed. By the time the mine closed in 1980 only 9 men were working there, 4 at the work face and 3 at the mill, 1 on the pulley and 1 odd job man.

In July 1980, P & M Hurll went into liquidation and the pump which had kept the mine free of water was turned off. By the end of 1981, the workings were merely subject to periodic inspection as they slowly filled with water. There were no plans for future activity.

A Mr Caine who had previously worked in the mine for several years was left in charge of making periodic inspections of the mine.

Video of inside the Birkhill Fire Clay Mine.

1908 – Bob McMillan, P & M Hurll, Gartliston Brickworks, Glenboig. A personal recollection states Mark Hurll leased the Birkhill Mine at Manuel Junction near Bo’ness from Hamilton Estates in 1908 and the Company took over the mine in 1916 …

12/02/1926 – Aberdeen Press and Journal – Buried by a fall of clay. Bo’ness police reported yesterday a fatal accident in the clay mine at Birkhill, near Manuel Junction, belonging to Peter and Mark Hurll, Ltd., brick manufacturers, 144 West Regent Street, Glasgow. Peter Wolfe and three other three men were excavating clay at the face when a heavy fall occurred from the side of the mine. The others sprang clear, but Wolfe was thrown against a standing hutch and buried by the fall. He sustained severe internal injuries, fractured ribs and pelvis, and died soon afterwards.

28/05/1926 – Linlithgowshire Gazette – The last inquiry was into the circumstances of the accident which caused the death of Baltrus Wilksj, commonly known as Peter Wolfe, clay miner, Garnqueen Square, Glenboig, Lanarkshire. The scene of the accident was the Birkhill Clay Mine, Glenboig.  Samuel Feely, fireclay miner, Glenboig, stated that Wolfe on 8th February was with a party of fireclay workers employed at Birkhill Clay Mine, Glenboig. Following the firing of a shot, while they were filling the tubs there was another fall from the roof. Wolfe was caught by the fall, and after 15 minutes work, he was extricated and found to be pretty badly injured. He was conveyed to Glasgow Royal Infirmary by an ambulance waggon but he died on reaching that institution. A formal verdict was returned.

24/12/1927 – The Scotsman – Alexander Fowler (30), clay miner, yesterday died in Glasgow Royal Infirmary from the effects of injuries received in a clay mine at Birkhill near Manuel Junction. Crushed by a heavy fall from the roof he sustained severe injuries to the head and his left thigh was fractured. The deceased leaves a widow who lives at Glenboig.

Below – 10/10/2016 – The Birkhill clay mine entrance fenced off and the tracks leading from the mine to the railway above. 2 hutches still remain fixed to the rails. 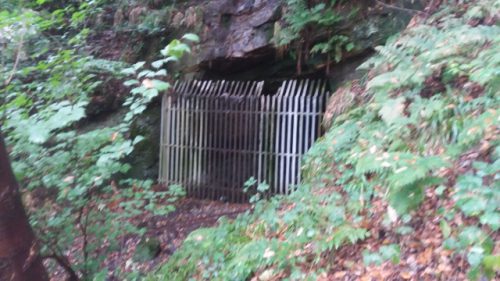 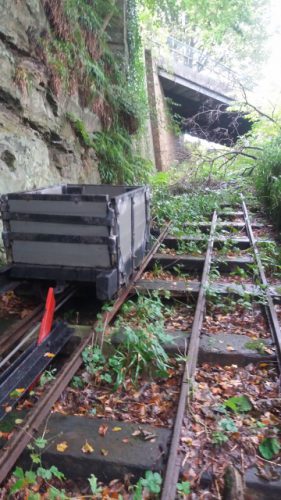 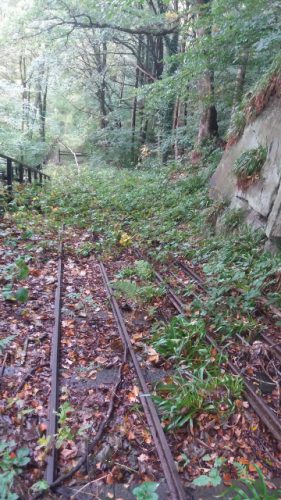 Culturenlmuseums – Information from workers who used to work in the mine and a video of the Birkhill Fireclay Mine crusher.